The one fact that has held true from the first engine built till today is you must have balance to hold things together and not vibrate apart.

I am a Performance Engine Technology Instructor at Daytona State College, therefore I must give you a short applied physics lesson first. The force of a rotating object generates centripetal force, that is the actual force or load generated perpendicular to the direction of rotation.

This means the crankshaft tries to bend with every rotation. A crankshaft with two ounces of imbalance at 8,000 rpm generates 227.2 lbs. of centripetal force, so you’d better buy a forged crank.

The method to properly balance the rotating assembly has definitely changed over the years. During the early years, it was like using a tire balancer – you had a free spinning object and the heavy side stopped at the bottom. You marked the bottom, took out some weight or added weight to the opposite side and spun it again. This continued until the mark stopped and did not try to rotate to the bottom.

That was good enough for the crankshaft. The rods were then put on a shaft at 180 degrees apart and placed between two V-blocks. The heavy rod would turn to the bottom so you took away some metal and repeated the process until the rods would stay level.

Then you would remove one rod and balance all the other rods to the one you left on the shaft. Once the crankshaft and the rods were balanced you would try to make all the pistons weigh the same and you would be done.

While today’s balancing technology is much better, some things remain very much the same. We still weigh everything but today it’s on high precision scales. Yes, we even add weight for the amount of oil between the bearings and the crankshaft journals. We still make sure the pistons and connecting rods weigh the same, but we also account for piston pins, rings and bearings.

When it stops, the computer tells us exactly where to drill a hole to remove weight, the size of the drill to use, and how deep to drill the hole. You cannot make a mistake and you can balance a rotating assembly close to perfection.

Stop The Shakes By First Understanding The Weight Relationship

Roger Lorton, of Standard Machine in Glendale, AZ, has been a race engine builder and expert balancer for more than 25 years. He says vibration is more than just annoying to the driver – it can be a nightmare for the engine builder as well.

“Maybe we should first ask if you have had cars shake?  You go through a lot of hoops disconnecting parts to see if it gets better. Fan belts, balancers, driveshafts, pressure plates, transmissions have all been removed in an attempt to make the motor smoother,” Lorton says, speaking from experience. “Sometimes it’s as simple as an exhaust rocker arm loose or not working that makes the motor shake. Other times the wrong weight combo balancer/flexplate has been installed.”

With everything else that goes into work an engine builder must do, one can never forget about the force of the fuel-air explosion that tries to push the piston out the bottom of the engine block. All these forces acting in different directions throughout the firing order lets you know that you must balance the engine’s rotating assembly.

“Anytime the motor is rebuilt and different weight parts are installed, there is an opportunity for imbalance,” says Lorton. “Either spend the money for balancing or get the weight of the new piston/rod to determine if it will work. If the combo is lighter it will most likely be fine. If it is heavier and it sends the combo into an underbalance situation, the results can be disastrous.”

Lorton explains that the balance sheet consists of two weight-related elements that are required to come up with the correct bobweight. “First is the reciprocating weight. This includes the weights of the pistons, pins, pin retainers (if used, and can be spiral locks, round wire locks, or snap rings), rings, small end of the rod and oil rail support or button if the piston pin is in the oil ring area. This latter instance is common in stroker engines and long rod motors. On a typical V8 you use one assembly weight in the bobweight.

“Second, you must know the rotating weight,” Lorton says. “This consists of the big end of the rod, rod bearing and a ‘guestimate’ for what amount of oil is on it while running. I use two grams. This amount is doubled for a rod journal with two rods attached.”

“Let’s take a bobweight of 1,800 grams on a typical 383 small block Chevy combo.  A one percent overbalance would be 1,818 grams. That is the minimum I would use for a daily driven combination. This combination is normally externally balanced, which also merits some additional overbalance to help the crank,” says Lorton.

Lorton explains that balancing is a very tricky process, but his experiences with his own race vehicles have taught him a great deal. “I own a Super Comp dragster, Super Gas 27T, Super Street 65 Mustang (street legal painted like a Hertz rent a car), and many other vehicles,” he says. “I have tried things on my own race vehicles and learned that what we think is right isn’t always correct, depending on the application.

One common assumption, according to Lorton, is that the correct reciprocating weight for V6 and V8 engines is always 50 percent. “I know of only one V6 with 50 percent: the Nissan. All domestic V6 engines I have done are between 36.6 to 39 percent,” he says.

“No one ever mentions the amount of overbalance needed,” Lorton explains.  “The longer the rod, the more performance expected, the more overbalance is needed.  The minimum overbalance I use is 1% – and since most of my work is performance, I use 2-5 percent most of the time. I even did a Robert Hight (drag racing) motor for a customer and it was definitely OVERbalanced. Top fuel motors would shake apart on the street, while bracket motors would be relatively stable. Put an underbalance or even balanced engine in a dragster and watch the scoreboards shake as you go down the track. Now put one percent overbalance and feel how smooth it is. It’s all about rod stretch and the power that it makes,” he says.

Various factors affect the amount of overbalance needed such as application (is it an endurance engine, a drag motor or for a boat?), compression, power adders used, transmission type, rod length and material, among others.  Therefore it is up to each engine builder to develop what works best for his clientele over years of experience.

Well-known engine builders have informed me that balancing an engine will add twenty horsepower, and that seems to be possible when you think of all the laws of physics that will be in check when you balance an engine.

Balancing has become a sought-after service in some segments you may never have considered and remains an important profit center in many machine shop operations. If the engine components (pistons, rods and crankshaft) aren’t in balance you’ll experience shaking and loss of potential horsepower.

An internally balanced engine uses the crankshaft’s counterweights to offset the reciprocating mass of the pistons and rods. Often, extra metal (“heavy” or “Mallory” metal) is added where needed. Occasionally, metal needs to be removed from the counterweights.

Externally balanced engines, conversely, have extra counterweights added to the flywheel or harmonic balancer to bring the components back into balance. External balancing can often be a solution in engines with longer strokes or large displacements, especially if there isn’t enough clearance inside the crankcase to handle counterweights of significant size.

The basics of balancing haven’t really changed over time – add weight if it’s required, take it away if needed. What has changed is the market’s expectations and the technology available to make balancing an accessible activity.

What used to be considered an art, black magic or simply too darn complicated for the average guy to figure out is, thanks to today’s modern balancing equipment, a service you can use to satisfy customers in nearly every industry in your community.

I believe the new technology is the best way to balance an engine but the old school boys have made it mandatory for us to come up with new technology to beat the records they set. 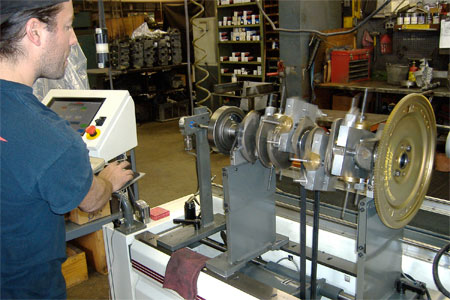