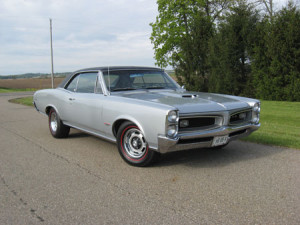 When Bunkie Knudsen became general manager of Pontiac in June of 1956 he set the world on fire.  His motto was, “You can sell a young man’s car to an old man, but you will never sell an old man’s car to a young man.” This led to the founding of the Super Duty Engineering Group at Pontiac. In 1961 Pontiac Super Duty 389 engines had won 30 of the 52 NASCAR races that year. For a number of years in that period Pontiac was third in sales, behind only Chevrolet and Ford.

In 1964 Pontiac introduced the GTO and started the muscle car wars. The GTO Tiger, or Goat  captured the imagination of an entire generation. With visionaries like Jim Wangers, an advertising genus, and John DeLorean an engineer and later general manager of the division, Pontiac became GM’s Performance Division. With great cars such as the GTO, Trans-Am, Grand Prix and Bonneville, Pontiac created a performance mystique that carries on despite the death of the division in GM’s bankruptcy.

The official reason for Pontiac’s demise was that 4 divisions had to be eliminated in GM’s bankruptcy. GM now sells more cars in China than in the United States and Buick has a major market presence in China. That is the real reason that Buick survived and Pontiac became an orphan. However, GM has continued to copyright and trademark the Pontiac name and images so who knows what the future may hold.

That Pontiac Excitement still lives today. During its heyday in NHRA drag racing, Pontiac introduced the 421 Super Duty Drag Package. The cars with these engines are still popular at Nostalgic drag races today.  With modern technology and tires, they defy the laws of physics.

When you go to a national meet such as The Ames Tri-Power Nationals at Norwalk, OH and see more than 1,000 Pontiac race cars and show cars at one time, you know this is still a big market.

The traditional Pontiac V8 engine was manufactured from 1955 through 1981.

The exterior dimensions of all these engines are the same. All Pontiac V8 engines were built on the same 4.620? bore spacing, with the exception of the 265 and 301 manufactured between 1977 and 1981. These are very light duty, low deck height blocks. Unless you are dealing with a numbers matching Trans Am, you would do well to avoid the 301 and 265.

Beware of pre-1964 blocks. They are not drilled for a block-mounted starter and you cannot use them in a ’65 or newer full size or a ’64 or newer A body or Firebird. Also, ’66 and earlier blocks have two freeze plugs on each side. 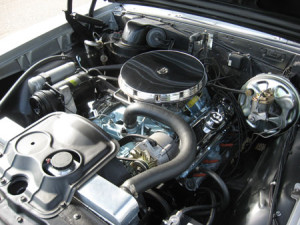 The ’66 GTO uses .090˝ over 389 pistons to use all the orginal ’66 engine parts with all the correct castings numbers. It has a mild Erson cam, reworked heads with screw-in studs and push rod guide plates and an Edelbrock 750 carb on the orginal intake with the orginal air cleaner.

As stated, the Pontiac remains very popular. Today it is possible to build a traditional Pontiac V8 without using one piece manufactured by GM. Using an aftermarket block, the most common displacement is 505!  Stroker crankshafts are available to 4.500 inches.

Aluminum cylinder heads are available with the standard “D” port exhaust or the round port like the Ram Air engines.  In addition, there are now vendors offering canted valve heads and modern versions of the Ram Air V tunnel port heads. Just name how much CFM you need your heads to flow.

When building your engine always use the oil pump with the 3/4? diameter pickup tube.  The standard pump only uses a 5/8? tube, but the performance engine requires the additional volume.  The Melling part number for the good 60 pound pump is M54F.

If you are using a ’72 or later block only use the ’76 or newer design oil pan with a five-pronged rear seal. The first design pan for these engines uses a three-prong seal that blows out, creating a major oil leak.

In 1967, Pontiac relocated the valve centerline in the cylinder heads to allow bigger valves and better breathing.

You must use pistons with the valve clearance notches in the correct place for the heads you are using. New pistons are now available for your vintage Pontiac V8 engine. The major manufacturers had discontinued pistons for 389 and 421 engines some years ago but, suddenly, the engines from the golden muscle car era are popular again.

Nostalgic performance parts are becoming a big business. At least one supplier of vintage and obsolete engine parts has a full line of coated pistons for vintage cars.  These are state of the art.

The coating extends the life of the engine and eliminates piston scuffing problems. Benefits include improved piston life, better cylinder sealing, and elimination of cold start scuffing. Coated pistons can be installed without modifying piston to wall clearance.

Pistons are readily available for:

If you are using an aftermarket cam you must convert the heads to an adjustable valve train. Using  ’67-up heads with factory screw-in rocker arm studs is easy. Just replace the factory stud that is 7/16? on the bottom and 3/8? on top with aftermarket straight 7/16? studs for a big block Chevy.

If you are using ’66 or earlier heads the safest thing to do is to convert the heads to screw-in rocker studs and pushrod guide plates. In the old days we just pinned the studs – but if one broke you had to replace the head. You cannot just run the nut down to the shoulder on the stud and torque it like you would do with a stock cam.

Here are some little (but very important) things that will help you complete a premium Pontiac project.

• Use the correct pushrod cover for the intake you are using. Early engines have the PCV valve in the rear; late engines moved it to the front. Also some covers have scalloped edges to clear big runners on the intake.

• ’64 to ’68 engines use an eight-bolt water pump and corresponding timing cover. ’69 and up engines use an eleven-bolt pump and cover. Be certain to use the correct baffles behind the water pump. If your engine is running hot I have had very good luck with certain aftermarket water pumps. Use the factory clutch fan and shroud.

• One thing to check is that all the oil galley plugs have been installed. There is one visible through the distributor hole in the block. The access is through a small hole in the back of the block covered with a small freeze plug. If this plug is left out, goodbye oil pressure.

With the big three now all producing 400 plus horsepower pony cars and a resurgence of interest in muscle cars by Detroit, a new golden age of muscle is returning. Pontiac engines may be more popular to build now than when they were new.  The April 2012 issue of Hot Rod Magazine ranks the Pontiac eighth on the list of the 20 best American V8 engines. They judged these engines on performance potential, historic significance, cool looks, affordability to build today and the easy-to-work-on factor.

The Pontiac engine is a torque monster. Built right it will run strong. Built strong, it may be the right profit center you’re looking for.

As the author stated, it is possible to build a Pontiac engine today using no OE?parts. Though this is by no means an exclusive or exhaustive list of parts suppliers, special thanks go out to the following companies for their parts and/or inspiration:

Additional suppliers of Pontiac engine parts can be sourced by referring to the exclusive Online Engine Builders Buyers Guide.