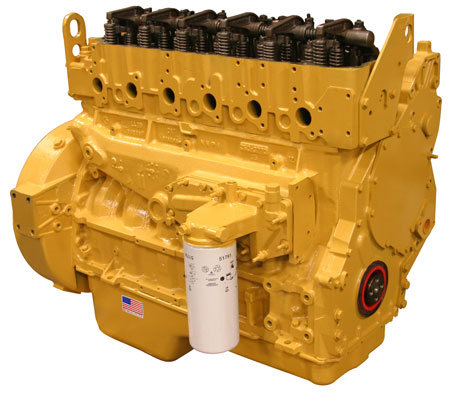 I believe society naturally directs the outcome of its environment: if someone manages a quality independent automotive repair shop, they will always be looking for ways to increase their education and specialty tools as technology changes. In order to take care of their customers when the warranty runs out and they no longer visit the dealership, shops need to adapt.

A quality independent automotive repair facility that keeps up with technological advances is no different than any other competitive industry. Look at the automotive manufacturers themselves. Today’s society has directed them to make more power, use less fuel and offer more features.

The choice of torque options allowed different transmissions, which are rated by torque capacity, to be matched with the C7. The 330 through 360 horsepower ratings were only available in RV and firetruck
applications.

The same can be said about the heavy-duty industry as well. Heavy-duty diesels that transport goods across the country along with the ones that are used to excavate highways are all using the same competitive strategies to stay on top. In addition, the EPA has raised standards and lowered emissions in response to or as a cause of technological advances.

The Caterpillar C7 engine is no exception. Another popular Cat engine, they’re now seeing rebuilding opportunities, so we thought we would take a look at how things have changed to get to where we are today.

Of course, to understand where we are, it’s often necessary to take a look back. The C7 was Caterpillar’s answer to growing demands for emissions reductions and was derived from its older engine brother, the Cat 3126.

The 3126 was, in fact, the replacement for the Cat 3116 and that’s where this story REALLY starts. The 3116 engine was used up until the mid ’90s until society demanded more. The 3116 caused strong reactions in many people, to say the least. Not too many 3116 owners were proud of Cat’s reputation behind the engine and, while the engine did prove reliable, it didn’t offer enough power for most users and was not very fuel-efficient.

To counter its poor reputation and meet tightening emissions demands, Cat released the 3126 in 1997 as its first midrange electronic diesel engine. The 3126 could be found in GMC, Ford and Freightliner trucks, Thomas and other school buses, recreational vehicles and smaller emergency vehicles. It was also offered in off-road applications as well in excavators, skidders, motor graders, industrial, and marine.

Depending on application, the 3126 ranged from 175 to 300 hp. It was a part of the “gear fast, run slow” strategy from Cat, which allows the engine to run slower at cruise speeds, translating into potential reduced fuel consumption. The 300 horsepower version produced peak power at 2,200 rpm with the torque peaking at 800 ft.lbs. at 1440 rpm.

To achieve its electronic advancement the 3126 engine utilized HEUI (Hydraulic Electronic Unit Injector). All HEUI designs work in the same fashion. The components include an ECU (Electronic Control Unit), electronic injectors, and various sensors placed on the engine and vehicle. This same technology is also found in the Ford Power Stroke and was used by International in several different applications with their inline six-cylinder engines in the DT series trucks, but HEUI is a trademark of Caterpillar.

When the injector is commanded to open, the 500 psi oil enters and then sends fuel out of the tip at 3,500 psi (7 x 500 because of the intensifier piston). At wide open throttle, the HPOP can supply the injector with up to 3,000 psi of oil pressure. So, the fuel being ejected from the injector tip can reach as high as 21,000 psi.

The volume of oil that is supplied by the HPOP is controlled by an electronic regulator. The various sensors monitor HPOP pressure in relation to engine parameters from coolant temperature, oil temperature, cam position sensor, throttle position, manifold pressure, and barometric pressure. Utilizing these electronic controls along with high-pressure oil brought about more precise engine control as well as more economy. This engine design also increased power and reduced emissions.

One thing that really set the 3126 apart was the design of its cylinder head. The inline-six cylinder head incorporated three valves per cylinder: one exhaust valve and two intake valves. The head was named “cross-flow” and revolutionized the airflow of the engine. Incoming air entered the engine from the right hand side through the intake valves and exited through the exhaust valve on the left hand side.

This cross-flow design changed the swirl characteristics of the cylinder head and was a big factor in improving power and combustion on this diesel engine. With all of these changes in the 3126, the power was almost double that of the 3116.

In 1998, after one year, Caterpillar released the 3126B, basically the same engine configuration with improved electronics. The ECU was upgraded from a 40 pin to a 70 pin connection. This advanced ECU was used to gain more engine control, as Caterpillar sought less smoke even upon cold start as emissions demands increased.

Another concern was to lower the operating decibels of the engine. The previous 3126 was considered to be “too loud,” so by controlling the engine with advanced electronics, fuel delivery strategies were also changed, lowering the decibels and making the engine more efficient.

As emissions tightened even further, Caterpillar released the 3126E in 2002. The 3126E was the same engine platform with even more advanced electronics and redesigned HPOP. The HPOP gave higher injection pressures and a new leak-free design. If the HPOP did leak, it would leak into the engine, unlike older designs that tended to leak to the exterior of the engine.

The HPOP will only leak when there is an internal seal problem, which is an indicator of an upcoming HPOP failure. This new design of HPOP also incorporated a different regulator system, however, this style of new pump was more costly to replace and could not be interchanged with older 3126 versions.

In the second half of 2003, Cat released the replacement for the 3126 version, known as the C7. Once again, you can see the trend as demand rises. Whether the circumstance involves making more power or keeping compliant with growing emissions standards; in order to compete, things must change.

The C7 was Caterpillar’s answer to the Tier 4 standard that would be required for 2004. The engine used the same configuration as the 3126 version, but the fuel system was changed, utilizing a new style of HEUI injector. The electronics were also more intense to offer further fuel control and electronic additions to the engine. The controller was upgraded to a 120 pin connection with much faster processing speeds.

One of the electronic additions is known as the Cat ACERT System – Advanced Combustion Emissions Reduction Technology – involves the precise control of the combustion cycle by controlling incoming air and fuel, as well as exhaust aftertreatment.  The new HEUI injector and electronics allow for multiple injections, different fuel rate strategies which help improve combustion.

In 2007, the C7 would change again, this time to adjust to the fuel, not just to market demands. You have to remember that in 2007, diesel fuel would change to ULSD (Ultra-Low Sulfur Diesel). With this change, Caterpillar changed the fuel system of the C7 to common-rail injection. The common-rail injection took injection pressures to 27,500 psi. The transfer pump supplies fuel to the fuel rail at 280 psi.

The reduction of sulfur levels in ULSD means less lubricity, so circulating the fuel rapidly at high pressure keeps heat down. The turbocharger was changed to variable nozzle technology, which can offer proper amounts of boost at all engine speeds. What is really impressive is that these engines can have a service life of 450,000 to 500,000 miles on a blend of B50 bio-diesel.

The 3126 and the C7 configurations share many similarities. The bore is 4.330? and the stroke is 5.000?. The compression ratio was 16.5:1. The cylinder head of the common-rail C7 is still three valves per cylinder but changed, as there is no oil rail cast into the cylinder head.

But there are some differences as well. The connecting rods and crankshaft still share the same journal sizes but have some changes also. The counterweights of the crankshaft are smaller to accommodate a lighter piston design. The rods are not forged as previous versions were but are now powdered metal with a “cracked cap” design. There are two different sizes of the small end of the connecting rod, depending on the piston used.

The C7 used two different pistons depending on its horsepower. There is a short one-piece aluminum piston for 210 hp and below engines that incorporates a smaller 1.5? diameter wristpin. There is a taller aluminum piston with a 1.811? wrist pin diameter for 230 hp and higher versions. A steel piston is used with the smaller 1.5? wristpin design for smaller hp applications.

The front gear train of the engine has changed which includes fewer teeth and a more coarse design. This is so that these gear designs cannot be interchanged with older versions. In addition, the oil pump now produces a higher volume.

Many C7 engines are now facing the need of a rebuild. Most of these engines see a service life of around 500,000 miles. In researching this article, Bill Wessel and others at Jasper Engines and Transmissions in Jasper, IN, explained that they have taken on production of the Cat C7 to meet the changing needs of the diesel engine aftermarket.

Jasper incorporates precision machining and quality parts on the rebuild of each C7 as they do with the other engines that they stand behind, and Wessel offers some tips. Even though the cylinders are not sleeved, the block can safely be bored. The cylinder block is torque plate honed so there will not be any cylinder distortion. The high pressure fuel lines are also replaced. Cat recommends this if they are ever removed.

Cat itself does not offer any gasket sets for this engine, so Jasper is working with leading gasket manufacturers to offer complete gasket sets needed for use during the engine install process. Other replacement parts are available for this engine in the aftermarket as well.

The basic C7 engine features an in-line six-cylinder and four-stroke diesel engine. The C7 model sets up as a turbo-charged engine, and the official compression ratio comes in at an impressive 16.5:1. The cooling system holds 3.5 gallons, while the lube oil system holds 5.5 gallons to ensure everything runs smoothly. These heavy engines weigh over half a ton with the flywheel, coming in at 1,295 pounds according to company specifications.

The air intake system uses traditional wastegated turbochargers to boost air intake pressures. The medium-duty engines uses a single turbocharger, and the heavy-duty engines use two turbochargers working in series. Cat uses variable valve actuation controlled by the engine electronics to adjust the amount of air that enters the cylinders for optimum combustion. The variable valve actuation will also allow Cat to offer an optional integral compression brake on two of their heavy-duty engines.

The electronic controls use the same hardware found on previous Cat engines, but they have re-programmed software to control the various new components and systems.

Finally, the exhaust aftertreatment package consists of a diesel oxidation catalyst to reduce particulates. This device has been used on certain Cat engines for several years with great success. It is incorporated into the muffler and requires no maintenance or cleaning. Cat says the expected life of the aftertreatment unit is equal to the life of the engine itself.

Special thanks to Bill Wessel, Brad Boeglin, Chip Helderman, Jimmy Corbin and Mike Pfau from Jasper for their assistance with this article.

Understanding and Profiting From the Caterpillar C7