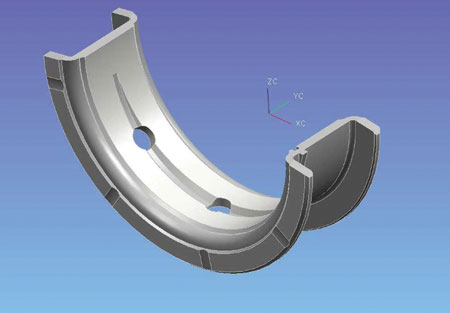 Engine bearing design and development have become more important in the quest for increased efficiency and performance. (Photo from ACL)

Engine bearings have a tough job to do for such a small component. They must support big loads on a thin film of oil (between .0001-.0004? thick) between themselves and the crankshaft journals to prevent metal-to-metal contact.

One of the biggest causes of bearing failures is dirt and debris that enters into the oil pan and gets sucked between the bearing surface and the crankshaft, interrupting that thin film of oil, creating a metal-on-metal contact. From that moment, various engine applications and bearing materials may react differently but the end result is usually still the same – a wiped bearing. And no engine builder or bearing manufacturer wants that.

We spoke to bearing manufacturers to find out what direction technology is heading regarding bearing materials and design, as well as how engine builders can better understand which bearings to use in specific applications.

The result, according to Scott, has been generally decreasing oil film thicknesses between journal and bearing. “As minimum oil film thicknesses can be less than .0004?, the shape (design) and manufacturing precision are key to assisting the generation of stable oil films and ensuring shaft-to-bearing separation under all operating conditions,” he explains.

Although quality bearings have inherent properties that compensate for a degree of misalignment (what bearing engineers refer to as conformability) and provide protection from hard contaminants within the oil (embeddability), engine builders can do a lot to ensure bearing durability by paying close attention to crankshaft preparation and overall cleanliness of the build. In fact, a significant percentage of bearing failures can be traced back directly to the assembly process, so it is a good idea to keep it as clean as possible.

“What is most important for installers is cleanliness in the assembly,” says Federal Mogul’s Bob Sturk. “Everything must be as spotless as possible. Dirt is the number one killer of bearings. When we have failures it’s always, by a vast majority, from debris and embedded dirt.
Echoing Sturk’s cleanliness comments, MAHLE Clevite’s Brett Dayringer says that thoroughly cleaning the block after machining is the best way to prevent dirt and debris getting into the oil system after a rebuild.

“Using hot soapy water and a good selection of bristle brushes is the best method for cleaning cylinder blocks, crankshafts and other engine parts before reassembling the engine,” says Dayringer. “Remember, any debris remaining after a rebuild will be picked up by the oil system and make its way to the bearings.”

Another important consideration when working with your engine bearings to pay attention to is that the wall sizes are consistent so that you can set the clearances without having to go through and measure several bearings for the right fit.

From a manufacturer’s perspective, King’s Ron Sledge says they recognize that bearing sizes and application-matched materials are very important to the installer and end user. “The installer wants very consistent bearing wall sizes to easily zero in on his desired clearance,” says Sledge. “His cranks are supplied with a consistent size, so he wants the bearings to measure consistently also. He can also save time and money not having to measure different bearing shells to get the correct one to achieve his clearance.”

ACL’s Scott says that his company’s solution, similar to King’s, has been to enhance their precision in the manufacturing process. “We have a portfolio of bearing materials with proven robustness across the range of engine applications,” he says.

The selection of the right bearing material is vital to a trouble free performance with any application. The most commonly used materials in crankshaft bearings are aluminum, copper, lead and tin. Obviously there are others, say experts, but these are the primary elements that are used. And they are all, on a comparative basis, much softer than the iron and steel crankshafts that run against them.

“Bearing materials are called on to satisfy many different conditions in the engine including load, embeddability and seizure resistance, just to name a few obstacles that they must overcome,” says Sledge.

Luckily, say manufacturers, years of research and testing have developed different material solutions for everything from street duty use to ultra high performance to optimize bearing performance in the aftermarket.

As most engine builders know, modern engines (late ’90s and newer) use bi-metal aluminum bearings, but each manufacturer has its own recipe for the construction and characteristics they are looking for. The basic construction is a steel back with a layer of silicone-aluminum facing the crankshaft.

If you are doing a stock rebuild, Federal-Mogul’s Matt Barkhaus says that it is very simple to choose the right bearing from the catalog, which will list all the specs and various sizes available.

Barkhaus says that on their bi-metal bearings the IDs are bored so the debris is flushed out instead of being embedded. “That’s one of the real benefits of it,” he says. “The other benefit of bi-metal is the wearability. They will last virtually forever, as long as you keep the oil changed and the engine is run in a fairly normal operating condition.”

Aluminum bearings can last much longer in mild load applications because of the wearability and the hardness of the silicon composite that actually polishes the crankshaft and wipes any nodes or debris out of the way or flushes it out, Barkhaus continues.

“OEMs have moved to bi-metal bearings because they are lead-free, economical to manufacture, and are extremely hard, which allows them to perform a very long time in passenger car applications,” says MAHLE Clevite’s Dayringer.  “As we’ve all seen, it is not uncommon for modern engines to run 150,000 miles or more on the original bearings.”

Virtually all performance bearings today are constructed using a tri-metal construction. Tri-metal bearings have the same steel back as a bi-metal bearing, a copper-lead intermediate layer, and a surface layer of soft material like Babbitt

“Tri-metal bearings work very well on race and performance engines because they are more forgiving, which allows for better embeddability than a harder bi-metal bearing,” says Dayringer.

Bearing materials are, in some ways, the hidden secret of bearing design, according to our experts. The “hidden” aspect of bearing material capability is in the design of the metallurgical properties embodied in the alloys. So, while all tri-metals and all bi-metals might look alike their properties and abilities can be significantly different.

“While proper fitment provides the basis for bearing system operation the materials provide the basis for system durability,” says ACL’s Scott. “To operate successfully, bearings require a range of attributes that, in terms of material properties, require a degree of compromise. For instance, the strength required to transmit high cyclic loads has to be moderated in order to provide good seizure resistance. How this balance is achieved is different for each bearing’s material/alloy combination. The clearest example is the comparison of properties between aluminum base ‘bi-metals’ and copper-lead based ‘tri-metals.’”

What are the primary differences in hardness, strength and embeddability between today’s aluminum and tri-metal bearings?

“Generally aluminum bearings offer greater embeddability and conformability while tri-metal bearings offer greater fatigue strength and hardness,” says Sledge. “The aluminum alloy layer on top of a steel back is a minimum .012? thick and can embed particles larger than .0005? in dia. The overlay thickness on tri-metal bearings range from .0005?-.0008? therefore allowing less embeddability.”

Federal-Mogul’s Sturk says there are basic differences in the hardnesses of the two bearings as well as some other differences in strength and embeddability. “In my view, embeddability isn’t really that big of a problem. I think today’s aluminum bi-metal bearings can handle a reasonable amount of debris. But if there are excessive amounts, that’s where the tri-metal bearings are better. The over-plate embeddability allows them to handle debris a bit better. If it’s a reasonable amount, if oil has been properly maintained, I don’t really worry about the aluminum’s embeddability.”

If you are looking to extract more power, experts say the copper/lead bearings are likely the optimal choice. Sturk explains that bearing engineers are primarily concerned with unit load as opposed to horsepower numbers in order to rate the strength of a specific bearing or material. Unit loads come from the cylinder pressures that are developed above the bearings in the combustion chamber.

It’s hard for an engine builder to estimate combustion pressure without a lot of expensive testing equipment that an OEM or bearing manufacturer would have, so Sturk says it’s probably best to go with a tri-metal bearing for any upgrade, just to be safe.

There is just a big difference in the wear rates of the copper/lead trimetals and aluminum bimetal bearings, say experts.

The copper lead tri-metal bearings are still the strongest materials available today, says Sturk. He says if you are upgrading or adding a supercharger or using other methods to extract more horsepower, it usually puts higher loads on the bearings. “In that case,” he says, “the tri-metal bearings will handle much higher loads. Our H14 materials (copper/lead) will handle unit loads up around 15,000 psi. The aluminum will handle much less, around 8,000-9,000 psi. It’s a big difference in strength characteristics,” he notes.

The attributes that a bearing needs to have can be compared to a tightrope because on the one hand you need hard fatigue strength components for durability and load carrying capacity, but on the other hand you need soft phase characteristics for conformability (when things are out of alignment), embeddability and sliding properties. When manufacturers select a bearing material, they look at the engine application and try to determine the most important thing the engine needs and then design the bearing around that.

Today’s bimetals contain a mix of other materials such as silicon, which is a hard particle that is added for increased durability. They have tin which is considered a soft face metal that is for the embeddability and conformability aspect, so today’s aluminum bi-metals have alloying elements in them to address those issues. But still, not all alloys are the same.

While all tri-metals and all bi-metals might look alike their properties and abilities can be significantly different. Bearing material capability is in the “hidden” part of the design of the metallurgical properties embodied in the alloys.

All these factors give the bearing manufacturers a great deal of freedom to tailor materials, and it can be confusing for engine builders trying to understand how appropriate the materials are for their specific application. Because the quality of the material may not be clearly apparent it is also hard for engine builders to make a judgment between competing products.

Different suppliers materials do behave differently, and within each family of materials there is a substantial range of capability. It is nearly impossible for a rebuilder to judge, on face value, how any brand of bearing is going to perform across a broad range of characteristics, so experts say it is best to rely on bearings from reputable, established brands.

When bearings are found to be damaged or show unusual or uneven wear, it typically indicates other problems that need correcting, problems that if left uncorrected may cause the replacement bearings to suffer the same fate.

Special thanks to MAHLE Clevite, King Engine Bearings, ACL and Federal-Mogul for their input into this article.