What does it take to put a top-notch Sportsman drag racing engine in the winner’s bracket? Obviously, parts selection, assembly expertise and a talented driver are key.

Over the years, Engine Builder has been an advocate of mastering the first two – the last one is always a gamble. But in some cases for that driver, winning begets winning. The 2012 IHRA?Summit Racing SuperSeries Top Class champion, Tim Butler of Sarasota, FL, received as part of his prize package, a brand new American Racing Cars dragster with a 565 cid Big Block Chevy engine build by Trick Flow Specialties.

While Trick Flow may be best known for developing cylinder heads for high performance street and racing applications, the company also knows a thing or two about building engines. Over the years they have put together hundreds of engines, ranging from docile small block Chevys to blown LS?motors, torque monster big block Fords and Chevys, and everything in between. Simply put, they know how to build solid, reliable horspower when it counts.

The complete package we outline here was developed to be a prize package – so we’re happy to present the “recipe” to you. Follow the plan to the letter or make adjustments to parts and components to see how your results differ.

According to Trick Flow manager Mike Downs, with a large 4.600? bore, 4.250?stroke, and a 6.535? rod, the 565 can make large amounts of horsepower and torque, yet uses readily available parts and requires minimal machine work. Better, yet, the 565 is adaptable to many IHRA sportsman and bracket classes.

Here are the building blocks for the engine:

Connecting Rods: Manley 6.535? H-beam rods are made from forged 4340 steel alloy and are fully machined, stress relieved, and magnafluxed. Each rod set is weight-matched to within 2 grams and come with ARP cap screw rod bolts.

Main and Rod Bearings: The Clevite main bearings have an exclusive TriArmor coating that offers extraordinary protection and lubricity. The bearings have enlarged chamfers at the sides for greater crank-fillet clearance and are made without flash plating for better seating.

Timing System: The two-piece Jesel Belt Drive system reduces the amount of harmonics being transferred to the camshaft. That means solid cam timing compared to some other types of timing setups. It also has an external cam timing adjustment feature that allows you to accurately set cam timing.

There are no special tricks or double-secret procedures to building a reliable race engine. It’s all about taking your time, keeping things clean and well lubricated, and most importantly, measuring everything – twice, if you have to. The steps followed by Trick Flow’s engine builder and tuner Todd Hodges are probably the same as you would follow when assembling an engine…or should be.

With a large 4.600? bore, 4.250? stroke, and a 6.535? rod, the 565 can make large amounts of horsepower and torque, yet uses readily available parts and requires minimal machine work. Better, yet, the 565 is adaptable to many IHRA sportsman and bracket classes.

Downs said that the PowerPort 360 head needed some enhancements to feed 565 cubic inches of race engine, so they turned to someone who knows his way around cylinder heads – current NHRA Pro Stock Champion Jason Line.

He made some revisions to the intake ports and did a bit of work on the combustion chambers to help give the incoming air and fuel a more direct shot at the valves – no trickery or fancy port work involved.

The Last of the Bolt-Ons

Along with the installation of the Trick Flow PowerPort 360 cylinder heads, which had been massaged by drag racer and diehard engine guy Jason Line, we also bolted on the Trick Flow R-Series intake manifold for photo purposes; it was removed for a trip to the porting and polishing room for some airflow enhancements. The rest of the bolt-ons included the following:

After assembling the cylinder head and valvetrain assembly for the 565, it became time to find out what this conglomeration of parts was worth on the dyno. Without giving up the results in the first paragraph, let’s just say those parts are worth a lot of horsepower.

With the engine all buttoned up, it was rolled into Trick Flow’s Superflow dyno room for some power pulls. Engine builder and dyno operator Todd Hodges added a set of Hedman Husler 2-3/8? to 2-1/2? stepped headers and hooked the distributor to the dyno’s MSD 6AL ignition system.

After making the break-in pull, Todd and Trick Flow’s resident tuning expert Cory Roth made a several power pulls on VP C-12 racing fuel, making incremental timing and carburetor jetting changes. Todd also tried a power pull with Q16, a 116 octane fuel that is highly oxygenated, allowing more aggressive tuning. With no other changes, the Q16 was worth an extra 13 horsepower.

Unfortunately, Todd and Cory ran out of Q16 before he could make tuning changes to take advantage of the fuel’s power potential. They switched back to C-12, reduced carburetor jetting from 106 to 102, added a carburetor spacer, and increased engine vacuum in a final attempt to break the 1,000 horsepower mark. The changes worked, netting 1,013 peak horsepower at 7,400 rpm and 770 lbs.-ft. peak torque at 6,100 rpm.

The 565 is proof positive of what kind of power you can make with the proper selection of parts and some well-thought-out airflow enhancements. For more information, visit www.trickflow.com. 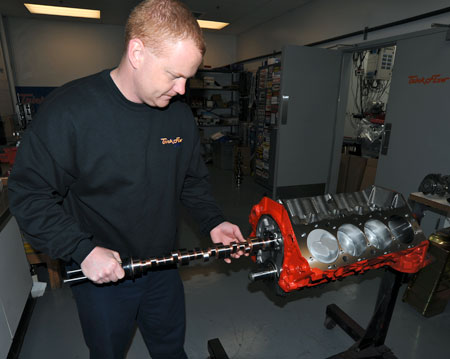