In October, you learned about the teachers at Sinclair Community College
in Dayton, OH, involved in the school’s High Performance program. This
one-year certification program provides hands-on, certified automotive
training for skilled entry-level positions in automotive dealerships,
independent garages and motorsports and other auto-related industries.

Its auto department is recognized as a leader in training and provides a
substantial advantage to its graduates in seeking employment, as well
as the independent shops hiring them.

Last month we talked about the instructors – program developer Professor
Mike Garblic, teaching Profession Blaine Heeter and his assistants
Kevin Smith and Jim Butts – this month we’ll focus on some students and
the engines they have chosen to build.

Kasey King, from Coshocton, OH, started the course when he was only 19.
He came with experience though, having two years of automotive
vocational training in high school.

Since his interest was performance engines, King took the opportunity of using a technical school to hone his skills. The starting point of his effort was a trashed 454 engine from a ’73 GMC pickup. The plan was to bore and stoke the block to 489 cubic inches with a capability of 500 horsepower. It took awhile, but the mission was accomplished – actually
528 horses and 500 ft.-lbs. of torque on the dyno. After tuning and refinement, he figures that 600 hp is possible.

That 454 GMC block was the main component used in the build-up, with most of the remainder being aftermarket parts and pieces.

King explained that he line-honed, de-burred, square-decked and did a  0.030? overbore, which added about 35 cubic inches. Finally, he balanced it at 850 rpm on a Sunnen crankshaft balancer. The heads selected were 454 LS-6 versions, which also required work.

“I did some porting to take off some rough edges from the casting, which helped the air flow,” King said. “I also port-matched the gaskets between the intake manifold and head.” The compression ratio achieved was 10.5-1.

Also, the valves needed attention and King cleaned up the facings. The gas-fuel mixture is provided by a monster 1100 cfm Demon four-barrel. The cam was initially planned to be a moderate flat-tappet,but he later decided on a more-aggressive mechanical roller type. The crank is aftermarket Eagle.

Coming from a drag racing family, it’s not surprising the planned
purpose of this engine isn’t a shock. “I have a 1991 rail dragster that I
run on a 1/8-mile strip,” King said. “I’m hoping I can get into the
mid-fives with this engine powering it.”

At 42 years of age, Dave Lemke of Dayton, OH, describes himself as an
“old school” mechanic. Lemke, who owns an auto repair and towing
business in Michigan, said his new quest is to ­concentrate on his hobby
and establish himself as a high-performance builder.

“With this build-up, I wanted to learn about upgrading the Chevy LS engines.”

The block received the initial attention when it was shot-peened and
measured. Next, it was punched out 0.125”, plus the addition of an
aftermarket stroker cam provided an additional 61 cubic inches of
displacement. That produced a 396 cid engine.

Lemke also wanted better engine oiling and cut channel on both the front and back of the block to open up a galley.

The next procedure was to balance the rotating mass of the engine that
included the pistons, rods, pins and clips. Aftermarket parts were used
internally with ADP Performance rods and moly pistons. Also, a GM LS7
cam was installed.

The stock intake was retained although it was ported and polished and was custom fabricated into a tunnel-ram configuration.

The heads received huge attention as Lemke figures he spent about 200 hours of machining on each of them. “I ground off everything that would hurt the flow. I then tested the heads on a Super Flow 1020 Bench and it recorded 278 cfm,” he said.

After the headwork was completed, the engine showed a huge increase in compression ratio from initially at 9.5-to-1 to an impressive 12.2-1.

The injection system was acquired from an 8.1L Chevy Vortec engine, which produced an injection pressure of 42 lbs. compared to the 5.3’s 29 lbs. of pressure.

For 65-year-old Jim Rose, his engine build project started at the lowest
of starting points with a rusty 1967 440 block that had been sitting in
a field for a long time. He also had an ultimate location for the
engine on completion — the engine compartment of a ’69 Dodge A-12
replica drag car and providing about 600 hp, which was accomplished.

Jim’s motivation for the build-up came from his longtime fascination of
big block Mopars. During the process, he found that there was a lot more
to do than he had expected. But he found help through Sinclair
Community College.

“The Sinclair instructors were always right there keeping me going in
the right direction,” he said. In all, there was about $6,000 invested
and “a whole bunch of hours of work.”

The first goal was to increase the displacement to 496, which was done
with an overbore. And there was also a lot of precision work required
including line honing and decking.

Jim decided that Edelbrock aluminum heads would be required to achieve the 600-horse figure he desired.

“I wanted them to be the best, so I carefully smoothed the intake and
exhaust passages,” he explained. “I also used larger 2.20? valves.”

Other upgrades included increasing the oil pan volume to contain eight
quarts of 20-weight oil. The fuel is 115 octane Turbo Blue with the
final compression ratio about 15-1.

Fifty-three-year-old Al Christian, retired from the Air Force, had the
strong desire to build up a 421 Stoker engine to serve as a street car
engine with about 500 hp and 550 lb.-ft. of torque.

It was a long journey as he started with a bare Bowtie racing block. The
increased displacement was accomplished by a significant boring to
4.155”. The block was honed and the deck was squared. All the galleries
were chamfered and the valleys smoothed.

To produce the power he required, he installed a potent rotating mass consisting of SRP aluminum pistons and Eagle rods.

Next, AFP aluminum heads were selected. Due to the fact that the valve
springs were gauged for racing, it was necessary substitute softer units
for street driving. “I had received good comments from builders who had
used these heads and they sure worked for me,” Al said.

Other engine parts that were selected were a Comp Cams roller cam and an
aluminum Edelbrock intake. The carb selected was an 850 cfm Demon.
Finally, the exhaust was expelled by 1-7/8” full-length Hooker Headers.

Al got a 10.5-1 compression ratio, which was what he had been hoping
for. What he also got that he desired was excellent dyno readings of 503
horses and 565 lb.-ft. of torque.

All of these examples are simply that – examples of people who are
actively involved in this industry and a positive sign that despite the
fear of technician shortages good, trained help is out there.
Investigate with your local community college or university about
students they have graduated from a machinist or engine building
program. Your next great employee may be waiting.

Or visit Engine Builder’s sister website, aftermarketjobs.com
to place an ad seeking employees. Aftermarket Jobs is the only
comprehensive job board serving the automotive aftermarket. Aftermarket
Jobs is the best way to expose qualified candidates to job opportunities
at companies large and small. Pulling open jobs from the collision,
distribution, executive, tire and service and repair segments,
Aftermarket Jobs effectively targets prospective employees in your
field. 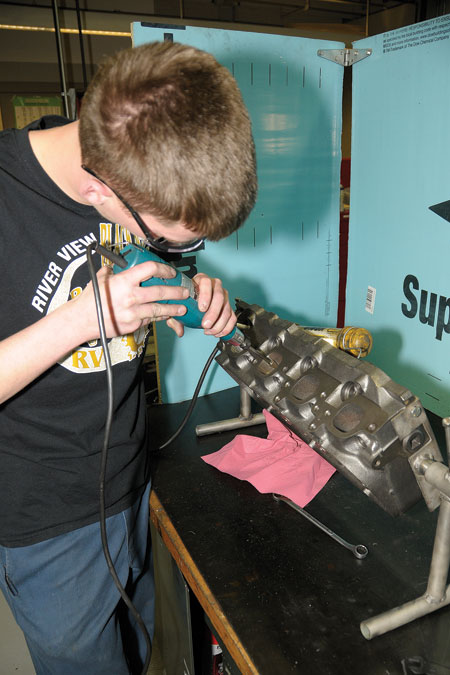 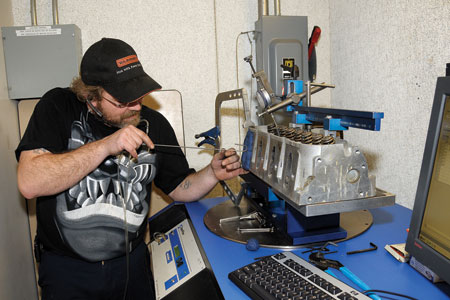