Keep in mind, however, that most of these engines are purpose-built engines that are machined with exacting tolerances. Crankshaft journals are precision ground to be as round, flat and true as possible, the journals are micropolished to a mirror-like finish of a couple microinches Ra or less, the bearings are precision fit to exact tolerances using a bore gauge and micrometer (not deformable plastic gauge), and the engines are run on high quality synthetic racing oil, not ordinary motor oil.

Reducing the oil clearance between the rod and main bearings and the crankshaft has a number of advantages. A smaller gap spreads the load over a wider area of the bearing surface and distributes pressure more uniformly across the bearing. That’s good, provided the bearing is strong enough to handle it. A smaller gap also decreases the volume of oil that has to flow into the bearing to maintain the oil film between the bearing and shaft.

That’s also good, provided the oil is thin enough (low viscosity) to flow well into the bearing. This also reduces the amount of oil pressure the engine needs, so some extra horsepower is gained by reducing the load on the oil pump.

In a NASCAR engine, rules limit the minimum diameters of the rod and main journals on the crankshaft. The rods are 1.850? in diameter while the mains are 1.999?. Most of these engines are running rod and main bearing clearances of .001? or less, and they are doing it with low viscosity racing oils such as 0W5, 0W30 and 0W50. These racing oils are as thin as water and are highly friction modified.

They also contain extra anti-wear additives such as ZDDP (phosphorus levels up to 1,850 ppm or higher) to protect the cam lobes and flat tappet lifters. These are race-only oils and are not recommended for street use because they do not contain the same detergents, dispersants and corrosion inhibitors as ordinary motor oils. Ordinary motors have to handle extended oil drain intervals while racing oils do not. Also, the level of ZDDP is too high for late model vehicles equipped with catalytic converters.

With fuel injection, many NASCAR engines are now making close to 900 horsepower without a restrictor plate, and are turning 9,500 rpms for 500 miles. The bearings take quite a pounding but hold up extremely well (when was the last time you heard of a NASCAR engine blowing because of a bearing failure?). But what works great for NASCAR may not work in other forms or racing or on the street.

One of the disadvantages of closer bearing clearances is that it can increase both bearing and oil temperatures. That’s no problem as long as the bearings and oil can handle the heat, but if they can’t it increases the risk of lubrication breakdown and bearing failure. That’s why high quality synthetic motor oil is absolutely essential if you are building an engine with tighter than normal clearances.

The old rule of thumb is to provide .0007? to .001? of bearing clearance for every inch of shaft diameter in a stock engine. Consequently, if the crankshaft has two-inch diameter journals, the rod and main bearings should be assembled with about .0015? to .002? of clearance.

For performance applications, some bearing manufacturers recommend adding an extra half a thousandth of clearance. Why? Because the rod bores don’t stay round in a performance engine at high rpm. When the piston reaches top dead center on the exhaust stroke, inertia stretches the rod and elongates the bore on the big end of the rod. This, in turn, deforms the bearings and reduces bearing clearances on the lower rod bearing while increasing it on the upper rod bearing.

For high revving performance engines, some bearing manufacturers recommend rod bearing clearances of .002? to .003?, with an absolute minimum clearance of no less than .0015?. The tighter the clearances, the tighter the geometry requirements are for the crank journals (as round, straight and smooth as possible with little or no taper).

Street engines can benefit from tighter tolerances and thinner oils for everyday driving. But when power adders such as nitrous oxide, turbocharging or supercharging are used, or the engine’s power output gets up in the 450 to 500 plus horsepower range, looser bearing clearances are probably safer to accommodate crankshaft flexing, main bore and rod bore distortion.

The same reasoning applies to drag motors, truck pull engines and other performance engines that produce serious horsepower. Many of these engines are built with rod and main bearing clearances in the .0025? to .003? range.

For the Saturday night dirt track racer, clearance is your friend because of the contaminants that often get into the crankcase. Looser is usually safer.

Rod and main bores should be as round as possible with no more than plus or minus .0005? of variation for a performance engine (.001? is close enough for stock). You also have to take into account the fact that the bearings themselves may not be perfect. Manufacturing tolerances of up to plus or minus .00025? are not unusual in some bearings, while others may vary only .00015? or less.

One of the advantages of looser bearing clearances is that it allows more room for “slop,” which is important if the crankshaft isn’t machined to near perfection or there is some misalignment in the main bores. Wider bearing clearances do require a heavier viscosity oil (such as a 20W50 multi-viscosity oil or a straight 30, 40 or 50 oil). The heavier viscosity oil is absolutely necessary with wider clearances to maintain the oil film between the bearing and shaft so the bearing isn’t starved for lubrication. This also requires more oil pressure from the oil pump and/or more oil volume.

If a crankshaft grinder wobbles while a crankshaft is being ground, it can leave lobes around the circumference of the journal. These may be invisible to the naked eye and very difficult to detect with a micrometer. But if there’s any distortion on the surface, it may interfere with the formation of the oil wedge under the shaft if the bearing clearances in the engine are too tight. Polishing the crank can reduce surface roughness on the journal but it won’t get rid of the lobes or ribbing.

Another factor to consider is that the upper Babbitt layer on a tri-metal bearing is very thin, typically .0005? to .0008? thick. The top layer of Babbitt acts as a dry film lubricant when there is no oil between the shaft and bearing. That’s fine for a dry start that may only last a couple revolutions of the crankshaft, but it is quickly wiped away if the engine starves for oil when it is running under heavy load or at high rpm.

And once the protective upper layer of Babbitt has been destroyed, the intermediate layer of copper/lead alloy will quickly seize if there’s no oil film to keep it separated from the shaft.

Aluminum bi-metal bearings, by comparison, have high wear and corrosion resistance. With harder aluminum/silicon alloys, they can also handle higher loads while providing good anti-seize properties. Aluminum bearings are often recommended for cast iron cranks because they have a polishing effect on the journal surface. What’s more, according to some bearing manufacturers, a high silicon alloy aluminum bi-metal bearing will actually resist seizure longer than a tri-metal bearing if the protective oil film goes away.

That brings us back to the oil and bearing clearances. The oil doesn’t care what kind of bearing and shaft it is lubricating. It only needs to maintain enough oil film between the two surfaces to provide hydrodynamic lubrication and prevent metal-to-metal contact. There has to be enough oil pressure and flow to keep the bearings lubricated and cooled, and the oil itself has to have enough shear strength so it isn’t pushed out of the gap between the bearing and shaft at the point where the load is greatest.

Multi-viscosity synthetic motor oils flow more easily than conventional straight weight oils at both low and high temperatures. So they can handle cold starts as well as elevated operating temperatures (which is really important with turbochargers). To reduce friction and improve fuel economy, most late model stock engines are factory-filled with 5W20 or even 0W20 oil. Combined with tighter engine assembly tolerances, these oil and bearing combinations work relatively well for everyday driving and even mild performance use. For racing applications, though, the oil needs to be formulated specifically for racing – especially if the engine has a flat tappet cam that requires plenty of ZDDP in the additive package.

You can get oil viscosities ranging from 0W5 to 120W60, with 15W40 being a popular viscosity for stock car racing, road racing and spring cars. For wider bearing clearances, some prefer to use a heavier 15W50 or 20W50 oil. In drag racing Top Alcohol and Pro Mod classes, AHDRA Nitro Bikes and blown alcohol tractor pulling, 20W60 may be the lubricant of choice. For NHRA Top Fuel dragsters and Funny Cars, a 70WT oil might be used. So the type of oil that’s used will depend on the application and the bearing clearances inside the motor.

An additional layer of protection can be achieved by installing coated bearings. Various types of proprietary coatings are available that provide scuff resistance where there is no oil between the bearing and shaft. Such coatings cost extra, but are good insurance against dry starts and may save a crank if the engine loses oil pressure in a race.

Finally, regardless of what type of bearings you put in an engine or how close you set the bearing clearances, always use plenty of assembly lube to coat the bearings. Also, use the proper break-in oil when the engine is run for the first time. Break-in oils are typically a straight 30W oil without friction modifiers for fast ring seating. But they also contain extra ZDDP anti-wear additives to protect the cam and lifters. The break-in oil can then be drained and replaced with the type of oil (conventional or synthetic) that will be used from that point on. Be sure to tell your engine customer how important it is to use a high quality oil and that it has the correct viscosity to match the bearing clearances and lubrication requirements of the engine and application. 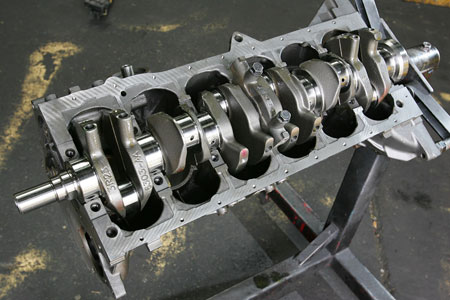 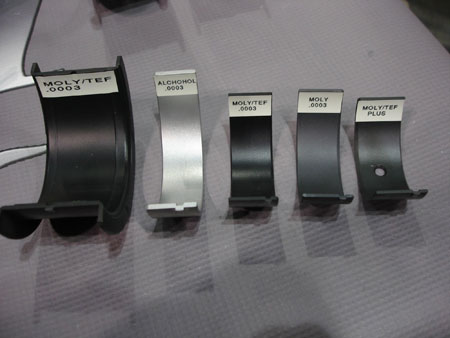 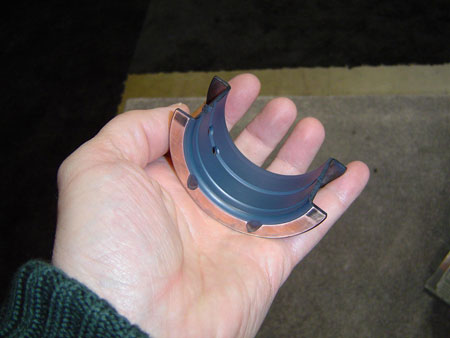 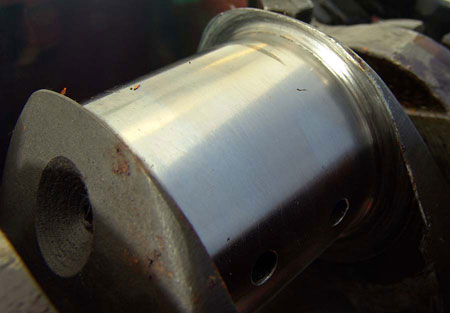 Racing Transmissions
Connect with us