There are many variables that need to be calculated and calibrated when it comes to electronic fuel injection (EFI), but simple fuel flow is just the beginning.

EFI goes far beyond a replacement for a carburetor, and the electronic part of the equation is where these systems seem so complicated. Many EFI systems give you the ability to control a wide range of parameters of the vehicle, so it’s more involved than simply controlling fuel flow. It comes down to being able to completely control the engine and the vehicle’s systems by carefully calibrating fuel and timing at specific load levels.

While there are several self-tuning systems on the market today, the ability to accurately map an engine and make it driveable in your customer’s application is becoming increasingly important. Self-tuning has come a long way, according to industry experts we surveyed for this article, but a good engine tuner or, as some prefer “calibrator,” will always be in demand.

A competent tuner should be able to improve the engine’s characteristics, making it more powerful or more efficient, depending on the customer’s needs. For instance, a street tune with its calibrations and many different load points will be a much different looking map than a race tune, in which the vehicle is mostly run at WOT (wide open throttle).

Without enough space or time to discuss everything you need to know about tuning EFI systems, we highly recommend reading up on the subject. A variety of books are available through online bookstores (e.g., Engine Management: Advanced Tuning, by Greg Banish; Performance Fuel Injection Systems, by Matt Cramer and Jerry Hoffmann; Building & Tuning High-Performance Electronic Fuel Injection, by Ben Strader – just to name a few).

But for a more hands on approach, some manufacturers offer classes and training as it applies to their specific systems. There is also a school dedicated to teaching the ins and outs of tuning called EFI University, that will take you from theory to practice in a matter of a few days. You don’t need to have any experience with calibrating, and there’s something to learn for everyone, no matter what your experience level is.

We talked to top EFI suppliers and manufacturers to get to their thoughts on these ever evolving engine management systems.

Matt Wright of Haltech says they design and manufacture all of their own ECU’s and wiring harnesses as well as supply fuel injection hardware such as fuel injectors, sensors and fuel system components – in addition to the fuel system they also supply ignition components such as coils, igniters and CDI’s.

Wright says that he’s seen a definite evolution of EFI over the past 3-5 years, “We have started to see a lot more direct injection engines hit the market (where fuel is injected directly into the combustion chamber similar to a diesel engine), we are seeing a lot more variable cam timing engines and of course emissions control components are becoming more and more restrictive.

On the performance side of things we are starting to see a lot more electronic integration over the whole vehicle. Data acquisition systems are linking into engine management systems and powertrain control systems – with the myriad of electronic controls on a modern engine all the systems have to start talking and working together.”

Holley Performance Products’ Blane Burnett says a wide range of EFI systems is available, depending on what the engine builder/tuner needs. “We offer self-learning EFI systems for those who want to upgrade from carburetors to EFI, units for street performance, and we also have units capable of full race setups. These units are better known as our Avenger, HP,  Dominator EFI and Terminator EFI systems (soon to be released in 2013).”

The largest difference with EFI in the last 3-5 years, according to Burnett, has been with the utilization of the wide band O2 sensor and the faster processor that Holley has in its ECU. He says you can now target the air/fuel ratio and that cuts your tuning time in half.

Matt Cramer of DIYAutoTune.com, says they sell the MegaSquirt line of engine management systems. These are available in everything from the old-school solder it yourself kits to polished plug and play systems. The latest addition to the company’s lineup is the MS3-Pro, a sealed control unit aimed at a somewhat higher end market than its previous version. Cramer says that these systems can be used with either throttle body injection or multi-port systems.

The biggest changes Cramer says he has seen in the past few years is that the OEM systems continue to grow in complexity, driven primarily by emissions and CAFE standards. But he says the aftermarket tends to catch up pretty quickly. “The biggest change I’ve seen in the aftermarket world is price,” says Cramer. “Our MS3-Pro sells for $1,199 with a wiring harness, and even a year ago you would’ve had to spend around three times that to get the sort of features it offers.”

Our experts say that for old-school carburetor guys, there can be some perceived challenges at first dealing with the intricacies of an electronic fuel injection system but if you have a good understanding of how a carb and engine work, the transition will actually be seamless.

“Like anything, learning a new skill takes time,” says Wright. “If a guy genuinely understands how an engine works and how to tune a performance carb then the transition to EFI is a lightbulb moment in their career and it’s really quite a joy to experience. On other hand, if your knowledge of carbs is limited to  ‘look up what the manufacturer suggests and bolt it on,’ then the transition to EFI will be more turbulent.”

Some experts suggest that the biggest obstacle a “carb guy” may face is the fear he’s installed in his own mind. “I break the EFI system into three parts,” says Andrew Starr of Hilborn Injection. “The fuel system requires the correct placement of the components, which is detailed in our supplied schematic. The electronics are supplied with a schematic while the wiring is easily modified to fit the vehicle and, yes, a solder gun is mandatory (no butt-connectors, please).

And if you’re installing an individual runner (IR) intake manifold the technique of tuning the butterflies is presented in video form on our website. So any old school carburetor guy can do EFI once they get over their initial anxiety. Most people find tuning an EFI system easier than a carburetor when they’ve had a chance to work with it.”

Erik Brock of MSD Performance says instructional videos can help answer basic installation and setup questions. “We also make it a point to visit many engine builders in order to answer questions and take feedback.”

Eric Blakely of Edelbrock says they have made it a priority to get their customers more comfortable with EFI by eliminating the computer from the equation and offering EFI systems with a simple-to-use handheld calibration module.

“Our E-Street system has a simple to use E-Tuner. These handheld modules simplify the setup process by asking basic questions in order to get the right information for the system. They also make it convenient to tune right at the vehicle, instead of using a laptop computer and loading a modified tune,” Blakely says. “Our new E-Street EFI system will take this one step further by eliminating the cables and will communicate directly with the ECU wirelessly.”

Aftermarket EFI systems are available in many formats from throttle body TBI to multiport, but it depends on what your customer needs to determine which system is best for your application, say our experts.

Cramer says that DIYAutoTune’s control units can be used with both types of setups, although most of the fuel delivery hardware they sell is geared to multi-port. “Throttle body injection is cheap and straightforward to install and we’ve had thousands of customers go that route and they’re very happy.

At the same time however, it will never perform to the level that a good MPFI setup will, which is exactly why OEMs quit using it. Multi-port injection tends to get better fuel distribution from the start, and sequential systems let you tune the fuel on each individual cylinder as well if you want to get it perfect. There’s a reason OEM throttle body injection seldom showed up in high performance applications.”

When NASCAR switched to EFI at the start of the 2012 season, some said that it wouldn’t offer fuel savings because a carb atomizes the fuel better than EFI. Our experts pointed out that the carb may make more peak power but it is not as efficient throughout the whole rpm range. The carburetor, with its booster, is a much more efficient mixer of the air and fuel than the typical EFI system.

According to Brock, in some cases, a carburetor may atomize fuel better than EFI. “Across a wide range, port fuel injection will have better cylinder-to-cylinder distribution and atomization at much less development cost,” he says.

“The problem with carburetors is tuning fuel use efficiently throughout the operating range,” says Hilborn’s Starr. “NASCAR engines spend most of their time at WOT and are tuned accordingly.”

Cramer says the biggest disadvantage of EFI is that all those features can give you enough rope to hang yourself if you don’t know what an engine needs and just start smacking buttons. The power to tune the engine perfectly also gives you the power to tune it imperfectly.

Still, Cramer says horsepower and torque are easy enough to see in a dyno pull. And with EFI engines, all else being equal, will generally make more power all across the rpm range on average, where carbs tend to be a little peakier.

Holley’s Burnett says that while basically getting the same job done, the carburetor and EFI units do so a bit differently. “Some racing classes only allow carburetors to be used and will continue to do so for many years to come. Other types of car restoration professionals will continue to put what came on the car originally on their vehicles and that will sustain the carburetor in the same manner. Our EFI systems allow a customer to control many different functions all within one unit and to do so easily.”

Tuning an EFI system REALLY does require the engine tuner know about engines, say our experts. “That’s a big challenge these days in the EFI world actually,” explains Haltech’s Wright “You have a bunch of tech-savvy computer geeks tuning engines that they know very little about.”

The best tuners have a foot in both camps, say our EFI experts.

“No doubt, the guys who you’re looking for as a tuner know cars and computers,” Wright concludes. “As far as computer skills are concerned, if you can use Windows you can probably learn most EFI systems. The true professionals understand engines and they can operate a laptop.” 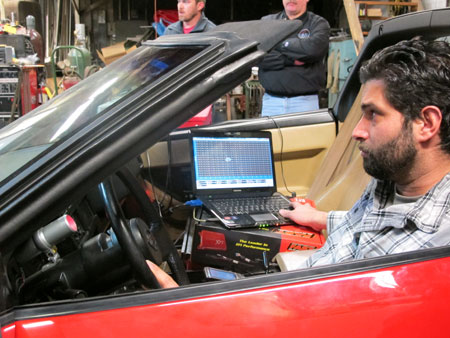 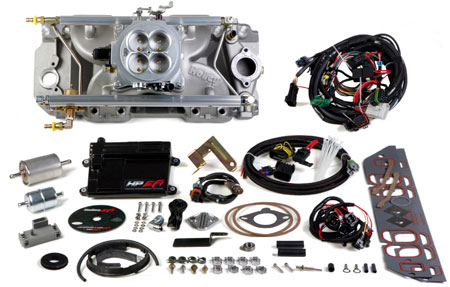 Tuning In To The EFI Market