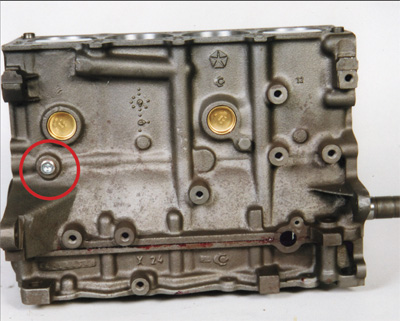 Chrysler replaced its old SOHC four cylinders with an all-new family of SOHC and DOHC engines in 1995. There were 2.0L SOHC and DOHC versions, along with a 2.4L DOHC that was installed in the FWD cars and minivans.

Over the years, this engine has been used in several other applications including the PT Cruiser, the RWD Liberty and Wrangler, and the SRT4 Neon. It has evolved over the years, too, so there are seven short blocks that use six block castings. So, let’s take a look and see if we can make some sense out of all the changes Chrysler made from ’95 up through ’06, before the 2.4L engine was replaced by
another all new family of “world class” four-cylinders.

The hole for the oil pressure sender on the passenger side was moved back about 6? in 2001 so it was much closer to the bell housing. It’s a 4621443AB casting.

There were some other changes made to accommodate the turbo motor, too, including a boss on the passenger side that can be drilled for the oil return from the turbo and an additional oil galley inside the block that’s machined for the four “oil squirters” that are used to help cool the pistons on the turbo motors. Look for a 4781632AA/AB casting.

Chrysler installed the 2.4L motor in both the RWD Jeep Wrangler and Liberty beginning in 2003. The RWD block is a unique casting
(53010502AA) that doesn’t have the “ear” that sticks out from the front of the block down by the pan rail on the passenger side of the FWD blocks. These blocks have “RWD” cast on the passenger side so they’re easy to spot. The Catch-22 is that this block was used for both the Wrangler and Liberty in ’03, but only for the Wrangler in ’04 because the Wrangler platform continued to use the old style computer and crankshaft (without “NGC”) through ’04 even though the Liberty got the “NGC” computer along with a new block and crank in ’04.