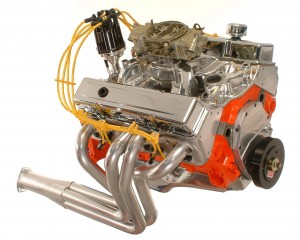 A 4-cycle engine is far from being a simple air pump. The principle reason turning apparent simplicity into real world complexity is the dynamic ‘stop – start’ nature of the flow through the engine and the fact that air is very much heavier than is often supposed. Rapidly changing rates of pressure and suction bring strongly into play both the momentum and the pressure wave effects that can be used to boost cylinder filling. At the end of the day this means that for a given displacement and rpm band there is a set of ports that are right for the job. Anything more than a few percent bigger or smaller is not.  The following tests will demonstrate the difference delivered by a range of port sizes.

The test engine, a 383 Scat cranked stroker, is typical of the majority of small block Chevy’s built these days. Intended for use with 89 octane fuel this engine is well within the budget of most serious hot rodders.

For this test a Scat 3.75 inch stroker (budget cast steel series 9000 crank was teamed with Scat’s budget 6 inch I beam pro-comp rods. Pistons were forged Silvolite ICON items. These in conjunction with the “as-cast” 72 cc combustion chamber Dart heads, delivered 9.8/1 CR. Had the 64 cc Dart heads been used the CR would have been bumped to 10.7/1 for use with 93 octane.

For what it is worth the torque and horsepower jump by about 15 numbers with the CR increase. For this engine the cam used was a custom 276 hydraulic roller grind done to precisely cater for the cylinder head characteristics, CR and displacement involved. If the saving of about $250 is of interest then it’s worth noting that a hot street hydraulic flat tappet cam with a 280 duration will deliver very comparable results.

Headers used were a set of street Hookers with 1- 5/8? primaries and a 2-1/2? secondary (collector) 18 inches long. The carb was a entry level 750 cfm AED unit mounted on a Dart two plane intake. It is worth mentioning here that it is, for this test to be valid, important for the intake manifold is capable of servicing the needs of the engine at both low and high speed. This means a manifold that flow well by virtue of with efficient ports not big ones. The Dart two plane item met those needs. At each cylinder head change, which ran small to large, the intake manifold was re- matched to the bigger ports at the manifold face. Ignition was via a Pertronix contactless unit. These are low cost and get the job done well.

The intent here is to run four pairs of the Dart Platinum Pro 1 heads having  intake port volumes of 180, 200, 215, and 230 cc. Regardless of port volume all these heads flow about the same cfm until some  0.400 inches of valve lift have taken place (see Fig 1). Even at 0.600? were the test engines valve train tops out there are measurable flow differences. Because of these differences are the result of a port size increase they are a legitimate component in our bid to investigate the overall effect on the engines torque/power curve.

Check out the flow curves in Fig 1. and you will see that the majority of the flow increases with increasing port volume occurs at the higher lift value. So much so that any test that did not put enough lift into the valve to access the extra flow at high lift would be totally skewed in favor of the smaller port heads…

We talk port size in cc’c but the reality is that it is the port cross sectional area that is the factor we wish to control. So why is port cross sectional area important? If the area is bigger the flow surely goes up and that’s what we want is it not?  Sure the engine wants as much airflow as possible but much of the flow through-put depends on port velocity and the generation of pressure pulses. This means an overly large port can hurt power even though it may, on the flow bench at least, flow better. The question is how does this work out on the dyno?

So you can better see what’s going on here the torque and hp graphs have been separated. The effect any particular head has on low speed output can be more clearly seen by considering the curves shown on the low end of the torque graph. To see the effects on the top end check out  the curves from mid to high rpm  on the hp graph.

Inspection of  the torque curves in  Fig 2 show the 180 cc ports (black)  turned in the best numbers up to 3400 rpm with a peak of 482 lbs-ft. The 200 cc port (red ) though marginally  lagging initially proved stronger from 3400 rpm up where it ran up with, or close too, the bigger ports.

As for the 230 cc port runner heads these, on our 383, failed to deliver any advantage anywhere in the rpm range. The smaller 215 cc port heads actually outperformed  the 230’s everywhere! If the test engine was capable of more rpm or was  of a larger displacement the bigger port heads would have paid off.

So how do you decide what port volume your small block Chevy should have for best results? Check out the chart Fig 4. This will give a good starting point for port volume selection for a 23 degree headed small block Chevy. A word of caution here. Do not overestimate the power you are likely to see. All that will do is lead you into a bigger port than would be optimal. This leads to less power than you had hoped for.  At the end of the day a little too small is better than a little too big!

What You Need To Know About SBC Port Volumes