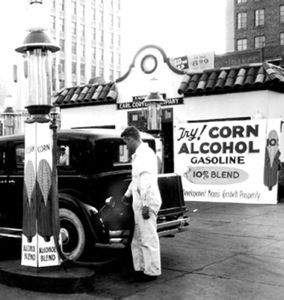 In the 1930s, new engines were being designed that would compress the fuel/air charge, resulting in a higher compression ratio. However, the greater the compression, the greater the engine knock, which lead to changes in automotive fuels offered in those days.

With all of the current controversy about alcohol being added to gasoline, I thought it would be fun to take you back to the 1930s where an almost exact situation was taking place, and there were some big players involved.

After revolutionizing the auto industry with his electric self-starter,Charles Kettering (below) turned to another problem that he himself had a personal stake in.

However, Kettering suspected it was a problem with the gasoline. New engines were being designed that would compress the fuel/air charge, resulting in a higher compression ratio.

The more efficient high-compression engines were necessary not only to make cars run faster, but also because the “experts” had determined in 1915, that the world’s oil supply would be depleted by 1940.

Many popular cars of the day, such as the Ford Model T, had low compression engines that used an adjustable carburetor and a mechanical spark advance that made it possible to switch from gasoline to alcohol to kerosene as needed.

Despite Henry Ford’s later support for alcohol fuel in the 1920s and 1930s, the only fuel the Ford Motor Company actually offered for sale was “Fordsol,” which was a mixture of benzene (from Ford ­factory coking operations) and regular gasoline.

Some early auto manufacturers, such as the Olds Gas Power Company, offered a simple mixer attachment for alcohol and claimed in their advertising that “under actual operating conditions… the fuel consumption per horsepower is about the same, pound for pound, whether using alcohol or gasoline.”

Kettering, who had become General Motor’s vice president of research and the president of the Society of Automotive Engineers (SAE), noted two directions in fuel research in a 1919 speech to the society.

There was, he said, a “strong move in the direction of blended fuels, with blends of up to 20% or more of benzene or alcohol added to gasoline; the other was a ‘low percentage’ additive, such as iodine, which was too expensive to be practical but points to the possibility of other additives…”

In a report on the war research committee, Midgley wrote: “Engineers have heretofore believed knocking to be the unavoidable result of too high a compression, and while the fact that (ethyl) alcohol did not knock at extremely high compressions was well known, it was (erroneously) attributed to its extremely high ignition point.”

Around 1920, Kettering came to believe that alcohol fuel from renewable resources would be the answer to the compression problem and the possibility of an oil shortage. “Ethanol (ethyl alcohol) never knocked, it could be produced by distilling waste vegetable material, and it was almost pollution-free.” (Remember, this is 1920.)

At Kettering’s urging, General Motors began to consider just what would be involved in a total switch from petroleum to alcohol fuel. One GM researcher determined that some 46% of all foodstuffs would have to be converted to alcohol to replace gasoline on a BTU-for-BTU basis.

Advertisement
In this article:Ford, Fuels, vintage

Blast From the Past — Alcohol-Based Fuels From Automotives Early Years