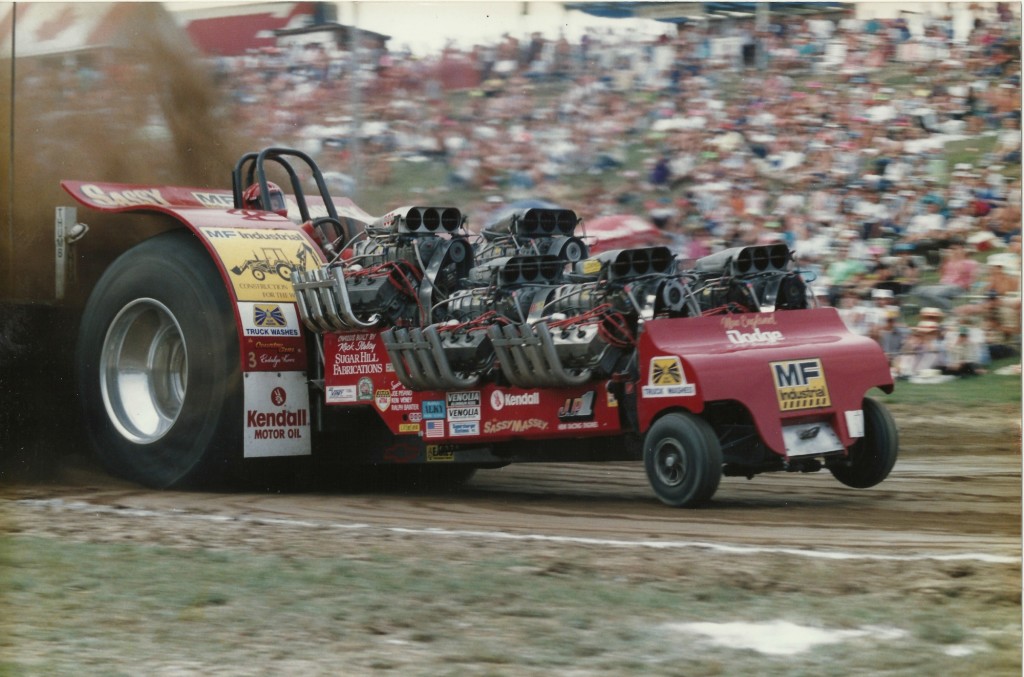 Located in the quiet countryside of Weare, NH, is an engine shop that for over 30 years has been building some of the most powerful Hemi engines in the competitive world of truck and tractor pulling. Sassy Racing Engines is run by John Knox, his son Brian and crew, dispensing gobs of Mopar horsepower and torque from various supercharged alcohol burning configurations. Rest assured that “Sassy”power is highly respected by both customers and competitors alike.

Hemi power started for the Knox family 45 years ago with a ’66 Belvedere II that was drag raced in the Super Stock class. In 1972 that car was replaced by a flip top B/FC ‘Cuda, powered by an alcohol injected Hemi whose diet was changed to nitro, pushing into the A/FC ranks in 1973.

The following year, a BB/FC ’Cuda hit the strip utilizing one of Milidon’s newly introduced cast aluminum blocks, struck with Serial No. 008, which was the genesis for the Knox’s supercharged pulling engine exploits. The final drag vehicle was a nitro guzzling Olds Starfire running in the top of the food chain class, AA/FC in 1978 with a best pass of 6.40 seconds at 228 mph.

All of the above mentioned hot rods were named “Country Girl” and driven by John’s wife Rodalyn, who was one of the first ladies to earn her competition license as she drove in all four divisions of Funny Car, Blown and Injected Alcohol and Nitromethane. ”The time needed to properly wrench a nitro car and run our family farm equipment business was quite overwhelming,” John Knox explains. “So we quit drag racing, which broke Brian’s 14-year-old heart.” That family business sold and serviced Massey Furgeson tractors.

Enter truck and tractor pulling, drag racing’s country cousin. “With pulling, it’s pretty much a laid back activity, often with a friends-before-customer attitude,” John recalls. “I had gone to a couple of pulls with my good friend Eldon Townes, liked what I saw and soon after that, Brian, Eldon and I were partners in a single engine modified pulling tractor powered by the reconfigured Hemi that was removed from the Funny Car.”

In the early ’90s Rodalyn would once again be behind the wheel, only this time focusing her driving chores on the “Unlimited” class of the National Tractor Pulling Association (NPTA). Their “Rookie Driver of the Year” award was hers in 1990, then she drove the “Sassy Massey” to three World Championships in 1995, 1997 and 1998. At one time, Rodalyn had the power of six supercharged Hemis under her control.

Having their own engines in competition provided a great R&D platform, also winning events and championships was an excellent way to highlight John and Brian’s engine building prowess to future customers. “We let our customers know what we were testing on our house tractor and let them try it, too,” Brian Knox says.

Calling on over 20 years of experience building and racing their own Hemis, the Knox family opened the doors of Sassy Racing Engines in 1981 with John and Brian doing the wrenching and Rodalyn managing the office. “The 426 Hemi engines were the best match with the supercharging we did,” John explains. “They fit together perfectly, and could easily accept modifications that other brands couldn’t.”

Initially the cast aluminum blocks were utilized from Milodon, Keith Black and Joe Pisano’s infamous JP-1. And in the supercharged pulling classes, the largest displacement allowed is 575 cid. “With our blown alcohol engines, the standard is 526 cid for reliability reasons,” says John. “In effect, this is a stroker, since it increases the stock 426 stroke length by .750˝. Through the years, as horsepower and torque numbers increased, the cast blocks have taken a backseat to the ultra-strong forged pieces out of Brad Andersen’s shop. “They are stronger and easier to repair,” says John. “That’s why all the top fuel teams use them today.”

Another component utilized in a Sassy engine is the billet aluminum cylinder heads crafted by Ken Veney’s team in Wadsworth, OH. One aspect of Sassy Racing Engines is the lack of major fabrication equipment. “We purchase most of our engine parts from other manufacturers who build them to our specs and we are able to make minor adjustments in house if necessary,” Brian says. John explained that SRE sometimes sell the various pieces unassembled to a few customers that choose to build their own power plant. John adds, “We also sell used Sassy engines and will repair any that were previously sold out of our shop.”

The father and son duo will tell you that even though their pulling Hemi engines are somewhat the same component-wise as ones used in drag racing, there are significant differences in the power and torque curves. “With a heavier load at the starting line for a pulling vehicle, torque is very important,”  Brian explains. “We try to get the vehicle to hook up around 50-75 feet down the track, at which time the engine should be putting out full torque. He also mentions that pulling is much harder on the engine than drag racing.