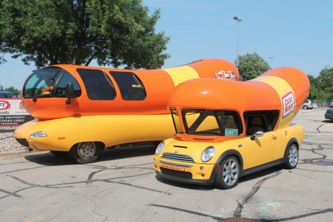 Most of the Wienermobiles you see on the road today are powered with a Vortec V8, 6.0L, 300 hp engine.

“Oh, I wish I were an Oscar Mayer Wiener, that is what I’d truly like to be…”

I’ll stop there because I know how easy it is to get that catchy tune stuck in your head, and besides, you already know the rest of the words.

One would be hard pressed to find a person of any age in America who couldn’t complete that jingle.

Sure, you may know the song – but do you know the history behind the Wienermobiles?

It all started in 1936 when Carl Mayer presented the crazy idea to his Uncle Oscar to transport the company spokesperson, “Little Oscar,” by way of a 13-foot-long hot dog car.

Fortunately, Oscar Mayer liked the idea of a giant hot dog roaming the streets of Chicago to promote his product and the Wienermobile is not only still around, but it is truly a treasured American icon.
It’s time now for a behind-the-bun journey to ketch-u-up on the history of the beloved Wienermobile.

Designed by the General Body Company of Chicago, the Wienermobile was originally created with open cockpits to be driven exclusively in Chicago.

Then in the 1940s, the vehicle was revamped to include a glass enclosure and expanded its scope to include the East and Midwest.

These 22-foot-long vehicles were built on a Dodge chassis, complete with a sunroof and sound system.

The next design was built on a Willys Jeep chassis and begins to look more like how you and I know the Wienermobile, because for the first time, this hotdog had buns!

The next couple models were built on a Chevy motor home chassis, complete with V6 engines and included franktastic features like Ford T-Bird taillights.

Disappointed Americans were forced to say sorrowful goodbyes to the retired Wienermobiles in 1977. But this anguish didn’t last for long! Only 11 years later, due to the enthusiastic response of multitudes of dedicated fans, a six-vehicle fleet of brand-new, 23-foot-long, fiberglass Wienermobiles was born.

In addition to happily resting on a Chevy van chassis powered by V6 engines, a stereo system was included that joyfully played over 20 versions of the Oscar Mayer Wiener jingle.

Bigger is better, reasoned California automotive designer Harry Bradley when he devised the design plan for the 1995 Wienermobiles.

Most of the Wienermobiles you see on the road today were built in 2004 at Prototype Source in California.

These dogs have evolved quite a bit from their original 1936 form with seating for six, a hot dog-shaped dashboard, a Gull-wing door with automatic retractable steps, a removable bunroof, an exterior back-up camera, condiment-splattered carpet, blue sky ceiling art, a smiling front grill, a control panel and storage space for 11,000 Wiener Whistles.

The two new models were released to the road in 2012 and even include state-of-the-art solar panels so the playing of the beloved jingle isn’t dependent on battery power.

Oscar Mayer made its 125th anniversary more celebratory by introducing a Mini Wienermobile!

Appropriately sporting the name LTL LINK, it’s built on a BMW MINI Cooper “S” chassis. Even though it’s referred to as “Mini,” it still weighs 3,600 pounds and is a whopping 15 feet long and 8 feet high!

Because there are only six Wienermobiles currently roaming the open American roads, make sure to relish those times that you’re lucky enough to run into a Wienermobile. Also, don’t be too bashful to sing along with the jingle — you know you want to.

“…’cause if I were an Oscar Mayer Wiener, everyone would be in love with me.”

What's Under the Bun of the Wienermobile

Boring & Honing in the Digital Age
Connect with us