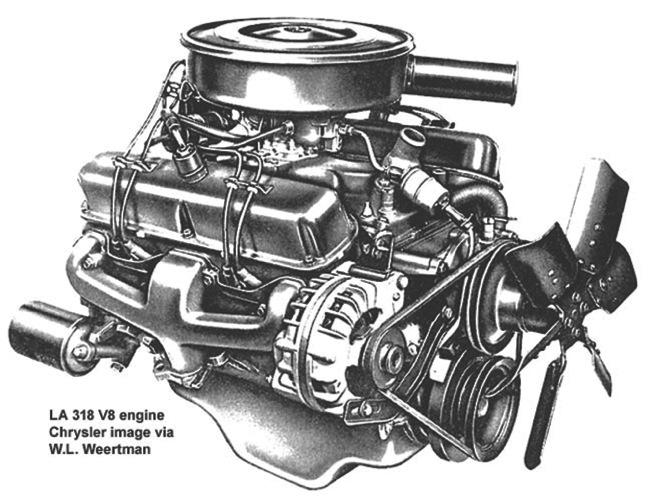 The LA 318 was a 318 cu in (5.2 L) relative of the A 318 and predecessor to the Magnum engine released in 1992. Like the A 318, it has a larger smog bore at 3.91 in, as well as a stroke of 3.31 in. Appearing shortly after the 273 in 1967, this engine proved tremendously successful in the 1970s and continued its run until 1991. It used hydraulic lifters and a two barrel carburetor for most of its production, though performance carburetors were used in police applications in the late 1970s. In the mid-1980s, the 318 received roller lifters and a fast-burn cylinder head.
Photo courtesy of Chrysler

Ever since the column I did in about stroker motors a few years ago (“Love the One You’re With,” Engine Builder, March 2010), the idea of building one of these engines, a less than everyday stroker combination, has been on my mind.

To recap, the premise of the article was simple — Look at the potential of building a small displacement, non-performance V8 into a bored and stroked tire blazer.

Instead of searching out a rebuildable muscle motor to swap in it’s place, use the money you save your customer by not getting a second engine, and all that it might take to put it in their vehicle. Instead, purchase a stroker crank, a more expensive set of pistons (possibly custom) and a good set of heads.

It’s done everyday, I know. A 302 Ford becomes a 347cid stroker. A 350 Chevy becomes the ever popular 383, and so on. Nothing new here.
But what if you aren’t starting out with an engine that has multiple stroker kits waiting to be purchased right off the shelf?
In my 2010 column, I proposed many combinations that wouldn’t take much imagination or break the bank.

Examples you say?  If you have a 360 Ford, the building blocks are no different than if it were a more muscular 390. With the right crankshaft and a bore cleanup, we easily surpass the legendary 427 and 428 cubic inch marks with a 434 cid engine. That’s a massive 74 cubic inch increase and a perfect candidate for a Cobra kit car or a Thunderbolt clone.

Now we come to our project. I’ve been toying with the idea of two ­different Mopar engine builds for years.

There’s something about your first love, and your first car that you never forget. Mine, car that is, was a 1963 Plymouth Savoy that had spent most of it’s life on the drag strip. It had a 383 in the car when I got it, and maybe we can tackle a project like that someday, but for now, we’re building a big inch small block.

To set this up, your customer has a 70s-something Dart, Demon, ­Challenger or any one of many midsize Mopars.

Their plan is to remove the tired old 318 and find one of the more popular muscle car V8s — like a 340, 383 or 440 to fit in it’s place.
Maybe he or someone else has played with the motor a little over the years and it’s now running an aluminum manifold and a 4bbl carb. But it’s tired and he wants more power.

Mopar Magic
What if instead of searching out a good rebuildable core for one of these motors, he’s interested in having it rebuilt?
And, you offer to meet his needs with the iron we have right here?

Besides, with its slightly smaller bore size, the short block of your 318 isn’t that much different from its coveted 340 big brother.
Add a small overbore and a 4-inch stroke crankshaft and we’ll now have a small block package that’s displacing more cubic inches than a 383, weighs less and with the help of a set aftermarket late model Magnum heads, will make power like the big block.

However, it’s a durable lightweight engine that has proved it had more than enough strength to grow another 42 cubic inches in the factory 360 form.

Plus, there’s a good amount of aftermarket parts available for this engine. But what I believe is the best bonus about this engine is that after so many years of production there are still plenty around waiting to test their potential and their relatively ­inexpensive.

With a few upgrades we’ll not only increase its power potential, we’ll have a very durable street rod motor.

Game Plan
So this is what we plan to do. With the help of our good friends at Grawmonbeck’s Machine, their dynamometer and a mix of stock and performance parts we’ll build a 6.4L, 392 cubic inch Dodge Magnum. It even sounds like a factory motor, and that is more or less how I see us building it.

We’re building the muscle car engine Chrysler never did. And muscle it should have. With a 4˝ stroke, a medium length rod and the Magnum heads this motor will make good torque numbers and enough horsepower to thrill a former 318 owner and should have a fairly flat torque curve.

And like Dirty Harry and his Magnum Force, we’re begging to ask the question, “Are you feelin’ lucky?” ­Because this engine could be yours following its auction. Bid on it, and you’ll be serving others who have ­sacrificed a great deal for our country in the process. 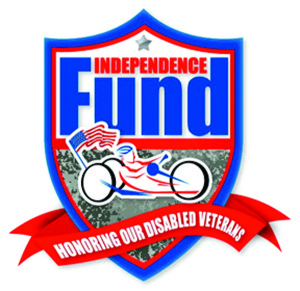 The Independence Fund is an entirely 100%, all-volunteer, non-profit whose board of directors is comprised entirely of combat veterans. The organization’s administrative costs are less than 1% each year! That means that more than 99% of every dollar that it receives goes directly to a veteran – thanks to amazing people and communities like YOU!

We have decided to choose the 392 Magnum for our first Charity Engine Build.

We’re all conscious that there are a lot things happening in this world that are a lot more important than building horsepower. After all, we are still at war.
And, we at Engine Builder plan to honor some of the brave and wounded men and women returning back to civilian life.

I was recently introduced to the Independence Fund and learned about its “missions.”

One of this fine charity’s goals is to supply hi-tech motorized wheelchairs (shown here) for our wounded veterans.

So far they’ve raised several million dollars to buy these off-road capable hi-tech machines to try to help restore some since of mobility and freedom for these heroes.

And I for one get very excited just to think I can be a part of this noble endeavor. And so can you.

During the next year we’ll continue to discuss the premise of building the less popular motors to meet the need, options for our Magnum and the steps and parts we use to complete it.

We’ll run it on the dyno and see just how well we’ve done at proving the point. But that’s not where it ends. After completion and dyno testing we plan to ship our street rod-worthy-and-ready creation to PRI 2014.

It will be featured in the Engine Builder booth, and we hope to give you a chance to win it, with a small donation in the form of raffle tickets. Proceeds will be donated to the ­Independence Fund (www.independencefund.org) where they’ll go towards a portion of the cost of one of these wheelchairs.

Building a 392 Magnum for the Independence Fund

Social Distancing Out on the Open Water
Connect with us