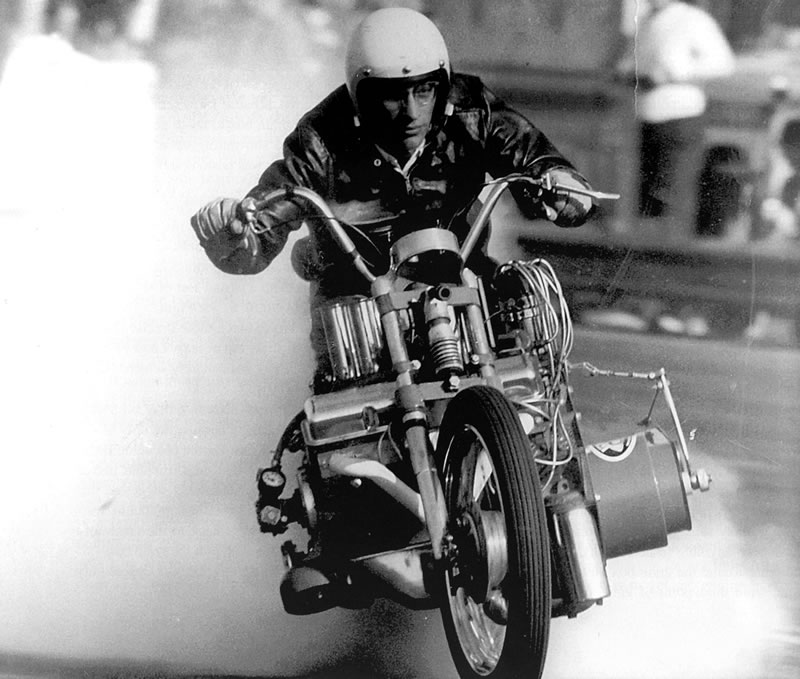 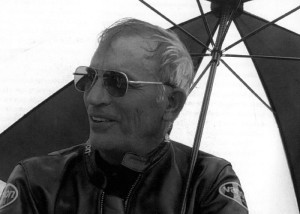 There seems to be one in every neighborhood. You know – the kid who takes his experimenting a little too far. Growing up, you probably knew that kid – or may even have been that kid.

Here is one of those true stories of “the kid” who’s love of machines and inventing got him into ­Guinness Book of World Records in the early 1970s.

Things began innocently enough as things always do with one Elon Jack “E.J.” Potter (April 24, 1941-April 30, 2012). While growing up in Michigan, he began tinkering with anything with a motor at an early age.

That lead to a hard lesson learned when he lost the tip of a finger to a motor scooter. E.J. promptly spent his recovery time reading books about engines prior to graduating from Ithaca High School with the class of 1959.

A few years later, he tried motorcycle racing and street riding, which would lead to his most famous misadventure, mounting a small block Chevrolet engine sideways into a Harley-Davidson frame

His V8 motorcycle was far from an overnight engineering success. He and his ride were way beyond street attempts and when he tried it out at the local drag strip, he was laughed at and not taken serious. That only made E.J. more determined. Finally, the local track promoter offered E.J. $1 for each mile over 100 mph E.J. could turn.

After a blazing 136 mph run that left a thick black tire track in the shape of a long, shallow “S” the whole length of the track, the local promoter said, “no more,” and sent E.J. packing to look for another place “to play.” 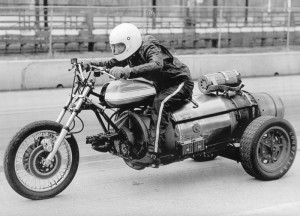 It took a verbal push from Art Arfons (of The Green Monster fame) to put E.J. on the exhibition trail. That push was a little less subtle than the one E.J. got from his friends each time he ran his bike – the engine was hooked directly to the rear tire via a ­series of roller chains and was run up to 6000 RPM before being literally shoved off its kickstand!

E.J. could not find a clutch to work in his ­application, so he decided direct-drive was the next best thing. With thoughts of nationwide touring, E.J. began to clean up his act and came up with a self-start system.

As an exhibitionist drag strip performer in the late 1960s and early ‘70s, E.J. became commonly known as the “Michigan Madman.”

During the next 13 years, E.J. Potter crisscrossed the U.S. with a series of improved V8 motorcycles that became known as the “Widowmakers” that easily lived up to their name.

Other home-built machines became part of his repertoire, including a jet-powered trike and an Allison-powered ‘57 Plymouth.

But most of his reputation came from the drag bike, which eventually put E.J. into the mid-eights at 180 mph!

But of all the antics E.J. pulled, I think my favorite is when he fired up a J-79 jet engine while still attached to its ­shipping pallet – in his carport!

The fuel system consisted of a small tank of kerosene and a hose, and E.J. operated the throttle with a pair of vise grips while he lay on his back under the engine.

When E.J. reduced power, then quickly opened the throttle of the 17,000-horsepower engine up again, the resulting “BOOM” blew out part of the windows in his house and those of his neighbors. 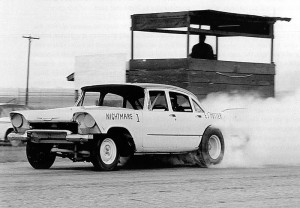 E.J. decided the Widowmaker project was getting a little out of hand so he decided to build something a little safer with four wheels.

He purchased an old Dodge Dart station wagon and promptly put an Allison 1700 CID V12 airplane engine in the back, hooked up to a Borg-Warner truck transmission.

There were some problems with the new machine, noise inside the car being the big one. The engine was deathly loud – but it ­certainly was a crowd pleaser, and it turned fairly good elapsed times.

Soon after the engine blew apart during a run, he felt himself in a bit of deja vu, sliding down a drag strip at 100+ mph on his rear! This time, however, he was wearing a Nomex suit, and had a racing seat still strapped to his rear, but the somersaults at the end were just as hard on his body!

E.J. would spend 13 years making exhibition runs at tracks across the U.S., with trips to England and Australia thrown in for good measure…E.J. decided early on he was never going to work for anyone but himself, and he never did. You could say that E.J. was self-taught in many areas of engine and performance interest. 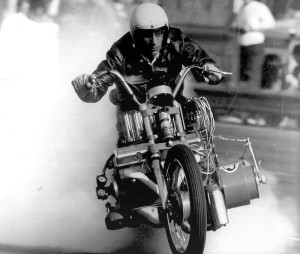 And it seemed his favorite way to learn was usually trial and error.

In 1992, E.J. was inducted into the Michigan Motor Sports Hall of Fame for holding his many racing and ­tractor pulling records.

Seems all that is left to the story is… “what ever happed to the last example of the Widomaker?”

Glad you asked. It resides proudly in the Museum of Speed at Speedway Motors in Lincoln, NB.

I have gone there and sat on that bike with museum owner “Speedy” Bill Smith looking on and offering to fire it up in the parking lot for my benefit.

I declined. Some things are ­better left to the imagination.

*Randy Rundle is the owner of Fifth Avenue Antique Auto Parts, Clay Center, KS, and services antique and classic vehicles for a living. He has prepared vehicles for movie studios, The Great Race, the 10,000-mile “Peking to Paris Motor Car Challenge” and other similar events. Rundle, an author of six automotive technical books, has spent 20-plus years solving electrical, cooling and fuel-related problems on all types of antique vehicles. Visit www.fifthaveinternetgarage.com.

Advertisement
In this article:Elon Jack Potter, The Michigan Madman, The Widowmaker

The Michigan Madman Meets The Widowmaker