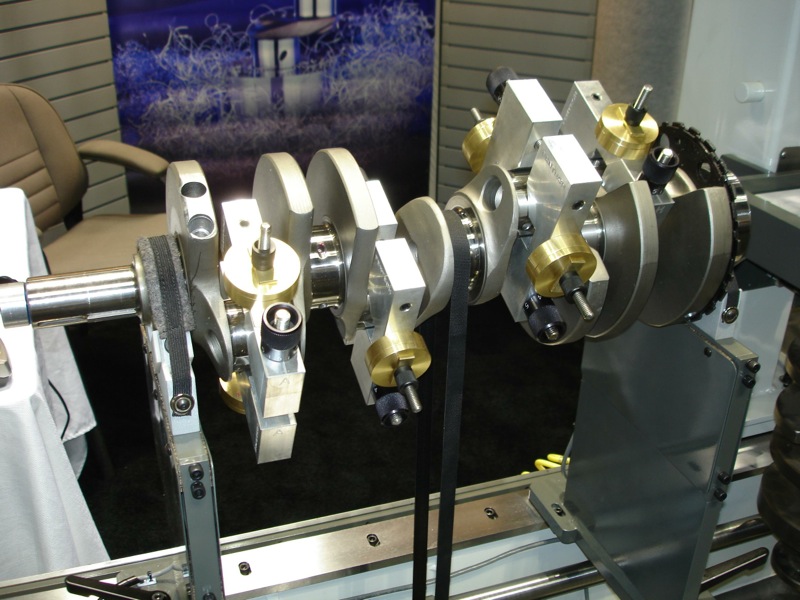 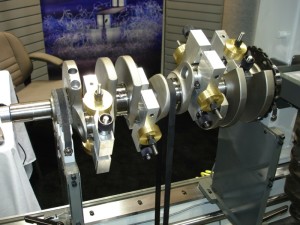 Some well-known engine builders have expressed that proper balancing can add 20 horsepower to an engine.

Whether you’re building a stock engine, a high-revving performance engine or a slow-turning diesel engine, you can’t overlook the importance of balance.  Every time the pistons in a reciprocating internal combustion engine change direction, they generate a force. That force is created by the reciprocating and rotating mass of the piston and rod assembly. If this force is not balanced by an equal and opposite force, it will create a vibration.

In a low revving engine, a little vibration may seem hardly noticeable. But over many miles and millions of cycles, even a small vibration can take a toll on the crankshaft and bearings.

In a high-revving engine, any imbalance multiplies exponentially as the RPMs go up. A small imbalance at 1000 RPM becomes a huge imbalance at 8,000 RPM. An imbalance of only a few ounces can generate a force of over 200 lbs. at 8,000 RPM! That’s a lot of shaking and stress on the engine’s bottom end.

Most race car drivers don’t care that much about NVH (Noise Vibration Harshness) but they do like to finish races. An engine with a severe imbalance can literally shake itself to death. The forces generated by imbalance can cause fatigue cracks in crankshafts and fretting in bearings. So if something breaks as a result of imbalanced forces inside the engine, the race is over for our unfortunate competitor.

Passenger car and light truck owners do care about NVH, and they also want their engine to last as many miles as possible. An engine that isn’t properly balanced can produce annoying vibrations and harmonics that can be felt throughout the drivetrain and chassis. And even though the engine may never be pushed that hard, the forces generated by imbalance will, over time, shorten the life of the engine and other drivetrain components (including the motor mounts).

With slow turning diesel engines, balance may not seem that important.  But most diesels are hard working engines, so even a small imbalance over a long period of time can shorten the life of the crankshaft and bearings. Over-the-road truck drivers also appreciate a smooth running diesel engine with minimal NVH.

Balance not only reduces NVH for a smoother running engine, it also improves engine reliability and durability by minimizing forces inside the engine that could do it harm.

The basic idea behind engine balancing is to equalize reciprocating forces as much as possible, and to make sure all rotating mass (the crankshaft and the lower half of the connecting rods) are in balance so the crank spins smoothly about its center axis.

When a rotating object such as a crankshaft, flywheel or tire is out of balance, it wobbles because its center of mass does not align with its axis of rotation. The heavy spot wants to pull the object off-center as it rotates.

The centripetal force generated by the imbalance multiplies exponentially with the speed of rotation (doubling the speed quadruples the force), creating a shake or vibration.

Balancing a rotating object requires placing it in a spin balancer so the heavy spot can be pinpointed. In the case of a tire balancer, a weight equal to the imbalance is then attached to the wheel rim opposite the heavy spot to equalize the forces.

With a crankshaft or flywheel, it’s much easier to lighten the heavy spot than it is to add weight, so the balancer pinpoints the heavy spot so a hole or holes can be drilled into the component to reduce the imbalance. It usually takes several spins and corrections before balance is achieved.

In a single-cylinder engine, there is nothing to counter these forces except the counterweight on the crankshaft.

If the mass of the counterweight equals the weight of the upper half of the rod, piston, wrist pin and rings, the forces will be balanced and the engine will run smoothly.

If not, the engine will shake. 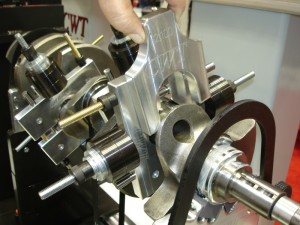 Balance between the crankshaft and its related components is critical to providing a smooth, trouble-free powerplant.

Things get much more complicated when we start talking about V6 and V8 engines, because one bank of pistons is moving at an angle to the other bank of pistons.

This creates force interactions that need to be offset by carefully positioned counterweights on the crankshaft.

A few extra grams also needs to be added to compensate for oil in the bearings and clinging to the parts. The total mass you end up with is what the counterweights have to equal to balance the engine.

For example, if each piston weighs 680 grams, the wrist pins weigh 190 grams, the ring set weighs 60 grams, and the small end of the rod weighs 290 grams, the total reciprocating weight for each piston and upper rod assembly is 1220 grams. Take half of that amount (610 grams), then multiply by two and we end up with 1220 grams of reciprocating weight that needs to be offset by counterweights on the crankshaft. To that, we have to add the rotating weight of the big end of each connecting rod and bearing (650 grams), also times two because there are two rods per journal. What we end up with is a combined weight of 2520 grams that the counterweights have to offset to balance the engine. This is referred to as the “bobweight” to which the crankshaft is balanced using bolt-on weights.

When a 90-degree V6 or V8 crankshaft is balanced, bobweights that equal 50% of the reciprocating mass and 100% of the rotating mass are assembled and attached to each rod journal on the crankshaft to simulate the rods and pistons. The crank is then balanced to the bobweights, usually by drilling the counterweights to equalize the forces.

With 60-degree V6 engines, the angle between the pistons is less so a different value must be used when calculating the reciprocating mass for the bobweights. This will vary depending on the application, and may range from 35% to 40 or 45%. The value may also vary depending on whether or not the engine has balance shafts.

The balance shafts have offset weights that help counter both engine dynamic vibrations and vibrations caused by uneven firing orders. Balance shafts must be correctly timed to the crankshaft, otherwise the forces won’t cancel each other resulting in unwanted vibrations.

In some cases, weight may have to be added to a crankshaft to offset heavier pistons/rods. This can be done by drilling holes in the counterweights and installing heavy metal tungsten (Mallory) plugs.

If the counterweights are not heavy enough to completely balance the engine internally, additional weights can be added to the flywheel, flexplate and/or harmonic balancer to offset any residual imbalance. This is called externally balancing the engine. Externally balancing an engine requires mounting the flywheel, flexplate and/or harmonic balancer on the crankshaft when it is spun in the balancing machine.

Internal balance is always best because it keeps the offsetting weight closer to the reciprocating forces that need to be balanced. Moving the weight out to either end of the crankshaft can sometimes create additional dynamic forces that cause vibrations of their own. Also, changing the index position of the flywheel or harmonic balancer on an externally balanced engine (or replacing either component) will upset the balance.

On most V8 cranks, there are only six counterweights to save cost and reduce weight. The counterweights are positioned in such a way that they offset not only the piston and rod assemblies on their own journals but also the adjacent journals. Some racing cranks are available with eight counterweights (two for each pair of pistons), which often helps reduce high RPM vibrations even better, especially on long stroke cranks.

Crankshaft counterweights are typically made to a specific target bobweight. In other words, the size, positioning and mass of the counterweights is designed to offset a specific piston and rod weight, (plus or minus a couple percentage points). With stock cranks, the bobweight is more or less equal to the weight of the stock pistons and rods. With performance cranks, various bobweights are available depending on the rod/piston combination you want to use. If the rods and pistons are lighter than the crankshaft target bobweight, the counterweights will have to be drilled or milled to balance the engine. Likewise, if the pistons/rods are heavier than the target bobweight of the crank, heavy metal and/or external balancing will be required to achieve proper balance.

Speaking of balance, most 90-degree V6 and V8 engines are “neutral” balanced, meaning they are balanced using 100 percent of the rotating weight and 50 percent of the reciprocating weight of the pistons and rods. Neutral balance works best in most applications because all the forces are offset and equal. But in some high-revving performance applications such as NASCAR where an engine may be running at 8,000 to 9,500 RPM or higher for most of a race, this may not be enough. The side effects of combustion at such speeds can create additional forces that may have to be offset by “overbalancing” the engine.

Some engine builders say they have found additional horsepower and smoothness at high RPM when they slightly overbalance an engine. Instead of using the standard 50% reciprocating weight when calculating their bobweights, they use 51 or 52% or whatever to achieve a certain overbalance.

This will obviously upset normal engine balance at lower RPMs, but may provide some performance advantages at high RPMs. The only way to know for sure whether or not overbalancing produces any significant gains is to test the engine on a dyno.

How close should an engine be balanced? It depends on the application, but the closer you can get to neutral balance the better — especially for high-revving engines.

Several crankshaft manufacturers we interviewed for this article said performance cranks should be balanced to plus or minus 2 grams or less.

Many electronic crank balancers are accurate to 0.1 grams (0.004 oz) so it is possible to shoot for near zero balance. But the closer you get to near zero, the more spins and corrections it takes to achieve such near perfect balance.

Realistically, an engine doesn’t have to be that close to be good enough. Most stock street engines will run smooth enough if they are balanced to 1 oz. (28 grams), although many late model engines have much tighter factory specifications (as little as 4 to 6 grams). For a high-revving performance application, aim for the recommended 2 grams or less.

If you are buying a rotating assembly (crank, rods and pistons) from a supplier, buying a pre-balanced assembly will save you time and trouble and assure a smooth running engine.

If you are buying a crank from one supplier, and pistons and rods from other suppliers, find out the exact weights of the parts to determine the target bobweight for the crank BEFORE you buy the crank.

This will simplify the balancing process and minimize the amount of drilling or milling that needs to be done on the crank to balance the engine.

Suppliers of performance pistons and rods are doing a much better job these days of accurately matching weights between parts. Even so, you should still weigh all the parts, and equalize to the lightest in the set when calculating a target bobweight for the crankshaft.

If you are doing your own engine balancing, one of the keys to achieving reliable repeatability is to make sure your equipment is accurately calibrated.

This includes not only the balancer, but also the scale you use to weigh individual parts. You should also follow the same procedures consistently.

When you’re mounting bobweights on the crank, make sure the weights are installed in the exact same position every time. Also, make sure the nuts that hold the bobweights together are tight and don’t come loose while the crank is spinning.

Advertisement
In this article:balancing, engines

Weighing in on Balancing Work

Motorcycle & Powersports Opportunities
Connect with us