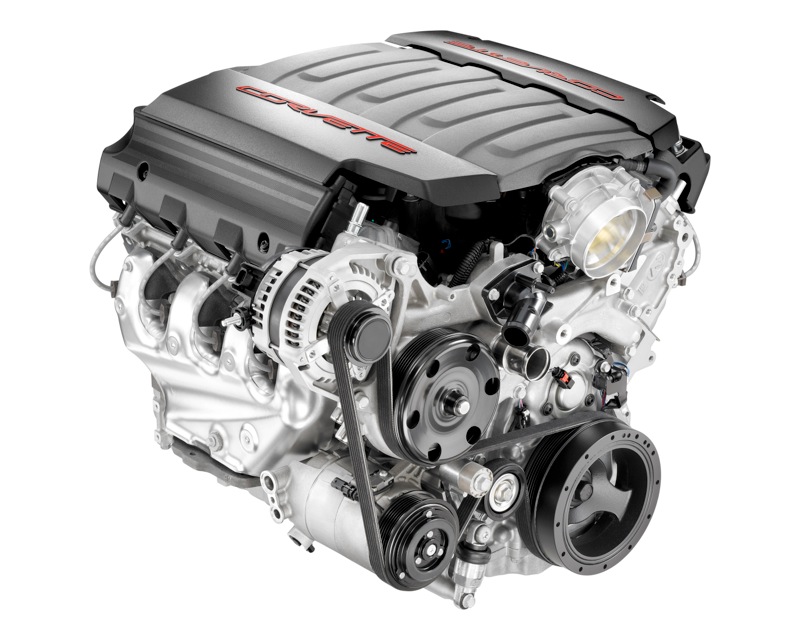 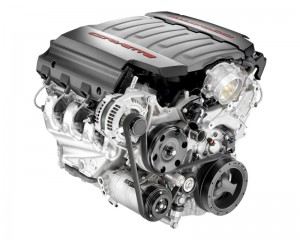 For the past several years, word on the street was that GM would be bringing back the highly recognized RPO code LT1 for 2014. The reason for the comeback was due to more power and efficiency with fewer emissions. At the time of hearing the rumor, thoughts of the 1992 through 1996 ill-fated “Optispark” seemed to dance around in my head.

Confusion set in, as it was hard to grasp as to why GM would abandon the LS series engines, and how the previous generation of small block could be better than the technology that shaped GM engines of today.

As time passed, the rumor deemed to be true and later revealed that the engine design would be taken from the LS family. The new LT1 revision consists of a 6.2 liter (376 cu.in) package weighing in at 465 pounds delivering 450 horsepower and 450 ft.lbs of torque and offering 26 mpg. The new LT1 is more efficient, more powerful, and offers more response than a smaller V8. Also, the new LT1 is faster than a twin-turbo V6.

LT-1 Gets its Start

GM first introduced the 350 cubic inch LT-1 RPO code for the 1970 Corvette. The RPO code stands for Regular Production Option. The RPO code is used by GM as a ­standard for vehicle configuration ­options. The RPO code consists of a combination of three alphanumeric characters that refer to a specific ­option or modification to a vehicle.

The LT-1 option was all about change, to raise the bar for performance.

Since the first Corvette in 1953, change in performance was always a quest for Chevrolet. The need for change and performance brought about the first V8, which was introduced in 1955. It was 265 cubic inches with a 4-barrel carburetor that produced 195 horsepower. Later through the years, more engines followed such as the 283, 327, 350, 427, and 454. In 1970, the base Corvette was offered with a 350 cubic inch ­engine that produced 300 hp.

The LT-1 option, which cost $447.00, offered 370 horsepower. But, it just wasn’t the 70 extra ponies; it was the sound of the racy special solid flat tappet camshaft and lifters in a small block that let the engine turn to 6,000 rpm. The engine was outfitted with 11:1 TRW pistons, four-bolt mains, high-volume oil pump, and 2 ½” exhaust that would propel the Corvette from 0-60 in 5.7 seconds and run the quarter mile in 14.2 seconds. After 1970, tighter emission standards were starting to creep in (which I often call the dark ages) that took a toll on performance engine development. In the following year, 1971, the same LT-1 option was produced with 9:1 compression and offered only 330 horsepower.

In 1974, the LT-1 had dwindled down to 250 hp and would not be offered for another 18 years. In 1992, it would return in the Corvette without the hyphen and be known as LT1. This time, it was all about change and trying to raise the bar in performance again. We were trying to come out of the dark ages and manufacturers were taking small steps in technological advances.

The new LT1 would be reverse cooled which meant that coolant would be circulated through the cylinder heads first and then to the engine block. The reverse cooling design utilized a new engine block and aluminum cylinder head design along with water pump, front cover, and intake manifold that would not interchange with the traditional small block. The crankshaft, connecting rods, ­pistons, and valvetrain assembly remained the same. The purpose of the reverse cooling was to keep the cylinder heads cool so the ­compression ratio along with the timing advance could be increased. The water pump and distributor was both cam driven from the front cover of the engine. The LT1 also featured a unique harmonic damper design, which also incorporated a drive belt pulley.

Under Other GM Hoods

The LT1 package produced 300 hp at 5000 rpm. Later in 1996, a high performance version of the LT1 was introduced for the Corvette known as the RPO code LT4. The LT4 featured a more aggressive camshaft, 1.6:1 rocker ratio, and higher flowing cylinder heads which produced 330 horsepower and 340 ft.lbs of torque.

Out of the Shadows

The LT1 would go into hiding again for another 18 years. Now, for the 2015 Corvette, the LT1 returns without a hyphen to bring about change and to raise the bar in performance again and be known as the GEN 5 small block. Even though the engine design is derived from the LS platform, there are several variables of the new engine design that separate it from the LS family.

The new LT1 features an aluminum block with a 4.060” bore and a 3.62” stroke to yield 376 cubic inches. The LT1 now features direct injection, AFM (Active Fuel Management), Continuous Variable Valve Timing, and a new combustion system that incorporates 11.5:1 compression ratio. The new LT1 has underwent many hours of research and development (over 6 million) and incorporates features from major advances in state of the art technology such as 3-D fluid dynamics, flame propagation analysis, and multi-cylinder combustion testing. The LT1 combustion system is the most intensely analyzed, developed, and optimized system in GM history.

In simple terms, direct injection is where highly pressurized gasoline is injected into the combustion chamber of each cylinder instead of conventional muti-port injection that takes place in the intake tract. The advantages of direct injection are increased fuel efficiency and power output along with lower emissions. The direct injection system for the LT1 utilizes a high-pressure fuel pump that is feed by the in-tank fuel pump and driven by the camshaft. The camshaft of the LT1 is in the same position as the GEN 4(LS3) small block and features a “tri-lobe” design at the rear cam bearing journal that drives the high pressure pump. Because of the “tri-lobe” design being at the rear of the camshaft, the high pressure pump is mounted in the rear of the engine valley between the cylinder heads and underneath the intake manifold. Pressure by the direct injection pump can reach as high as 150 bar (2175 psi).

With the direct injection pump mounted in the rear of the valley of the engine between the cylinder heads below the intake manifold. The intake manifold is a “runners in a box” design where individual runners inside the manifold feed a plenum box which offers efficient high velocity airflow.

Acoustic foam is then wrapped around the outside of the intake manifold which helps suppress noise from the direct injection pump. Bolted to the intake manifold is an electronically controlled 87 mm throttle body with “contactless” throttle position sensor for more accurate throttle control.

AFM (Active Fuel Management) will be the first ever offered for the Corvette.

AFM saves fuel by shutting down half the engines cylinders. Two stage hydraulic lifters deactivate cylinders during light engine load operation and will reactivate when driving conditions demand full power. ­Firing order of the engine is 1-8-7-2-6-5-4-3. The deactivating lifters are placed on cylinders 1-4-6-7. So at light load conditions, the firing cylinders are 2-3-5-8 with a V4 firing order of 8-2-5-3. Working with AFM is the continuous variable valve timing feature. ­Attached to the front of the camshaft is an oil driven cam phaser rotating with the ­timing chain.

The phaser has the ability to control 62° crank degrees of cam phasing. At base timing position the cam timing is locked. Under different driving conditions, the PCM controls the oil driven cam phaser to a retard the camshaft timing. The continuous variable valve timing in relation to AFM works to get intake gases in and exhaust gases out to optimize performance.

The new advanced combustion system is where many of the research and development hours were spent. The cylinder heads have smaller combustion chambers and with the use of the unique design sculpted pistons yields 11.5:1 compression. The design of the piston tops where optimized extensively to precisely direct fuel spray for complete combustion.

This is why the intake ports are large and straight with a slight twist to enhance the swirl. Even though the cylinder heads look the same as the LS3, the intake and exhaust valve positions are reversed.

The spark plug angle and depth have changed also to protrude the spark plug closer to the center of the combustion chamber. Intake valve size is 54 mm hollow stem and the angle has changed from 15* on the GEN 3 and 4 to 12.5*. The exhaust valve 40.4 mm sodium filled with an angle of 12°.

At higher engine speeds, the oil pump can deliver more pressure to sustain engine operation. For further protection, the cylinder block incorporates piston cooling jets which spray oil to the underside of the pistons and cylinder walls with cooling oil.

The new LT1 has an aluminum block with cast in place liners; nodular iron main caps compared to powered metal of GEN 4, new water jacket design, and crankcase revisions for optimized windage. The crankshaft is steel forged that has been induction hardened.

The piston tops are sculpted with a valve relief for clearance of variable valve timing operation.

A bowl in the center of the piston is used for fuel optimization for use of direct injection.

The main and rod bearings are polymer coated and the main bearings have a narrower oil groove than the GEN 4 for more bearing surface. The valve covers contain baffles, which separate oil and air from the crankcase gases. The integrated PCV system enhances oil life and longevity while reducing oil consumption that contributes to lower emissions.

The headers are similar to the four-into-one design used on the LS7 and LS9.

For now, the engine has sparked interest by aftermarket suppliers to come up with more ways to bring a more powerful showing from this engine.

And, you can expect upcoming performances to be playing in your shop in the not too distant future. So stay tuned, as we expect an award-winning performance from this engine — until is disappears from the racing stage, once again.