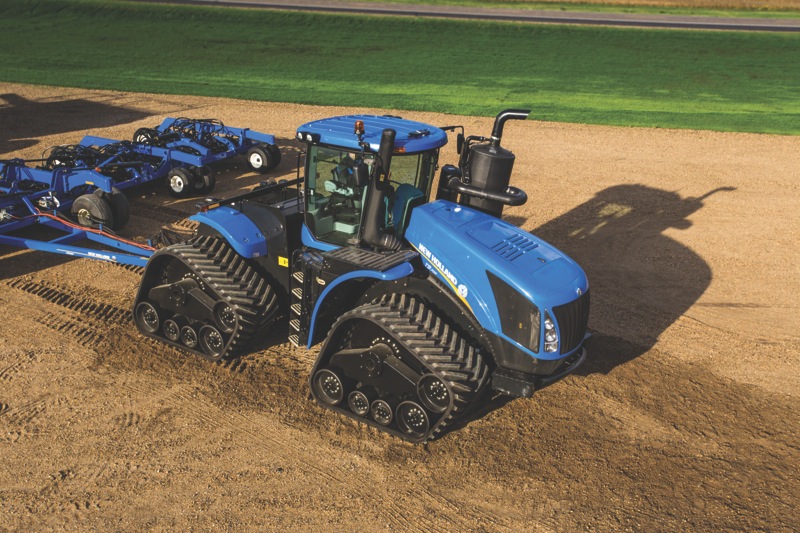 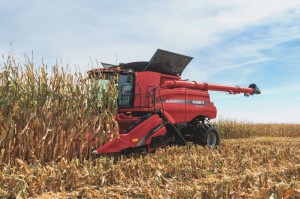 New tractors, ranging in size from compact to 4- and 6-cylinder engines, can cost $30,000 all the way up to several hundred thousand dollars. According to the Association of Equipment Manufacturers, 184,000 tractors were sold in 2013, up 10% from the prior year. The biggest jump in sales last year, however, was in tractors with less than 40 hp.

Despite the fact that new tractor sales were up in 2013, industry experts report that the business of rebuilding and remanufacturing older tractor engines and ag equipment was still very prevalent. In fact, most ag equipment doesn’t need rebuilding or remanufacturing for 10 to 15 years, so the increased number of new tractors being sold today means good news down the line for engine rebuilders and parts suppliers.

Due to the prohibitive expense of buying a new tractor or piece of ag equipment, many people, when their machines see engine issues, will opt for rebuilding the engine to get longer life out of their equipment. 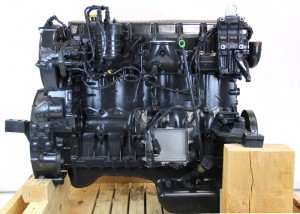 The biggest reason being the cost of these new engines – a Tier 4 engine is twice the cost of its predecessor. OEs such as John Deere and Massey are being required to use Tier 4 engines for emissions purposes. These engines are complicated due to selective catalytic reducers to reduce emissions and more electronic components.

“People are not only scared of the price, they are scared of the equipment because they don’t know it,” Kelly says. “We think people are going to be rebuilding their engines and giving them a longer life than they would have done in the past. I think it’s going to be a positive impact on the engine rebuilding world.”

Just as with classic car models, certain makes of tractors are beloved for their durability and their engines. John Deere, International, Case, Ford, Massey Ferguson, Perkins, Allis-Chalmers, Oliver and Cummins are just a few tractor engines that have stood the test of time. But it seems to be a unanimous fact that John Deere and International lead the rest of the pack when it comes to rebuilding.

Larry Scott, president of Scott Diesel and Farm Service in Fort Lupton, CO, rebuilds John Deere, International, Case, Ford and all the major brands of tractors. “The most popular engine I’ve seen come into the shop is both the John Deere and International 466 engine,” he says. “People tend to keep them because of the tractor’s reputation and the longevity of the tractors themselves, so they rebuild the engines.” 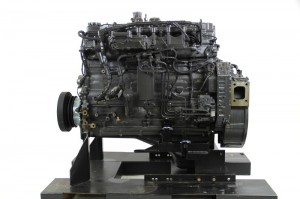 In the late ‘90s FTP formed an important, strategic alliance with Cummins to develop NEF (New Engine Family). Some of the most popular of these engines in Case/New Holland equipment is the 6-cylinder (6.72L) engine like this one. Photo courtesy of CNH Reman.

Charles Carey, owner of Carey Tractor and Tire Service in Ionia, IA, echoes Scott’s thoughts on the most common tractor engines, saying he works on International 466 engines a lot. “The 466 International engine is a hard engine to beat,” Carey says. “There are more Internationals around than anything else.”

No matter what kind of tractor a farmer owns, the fate of it relies on how well it’s taken care of and the level of regular maintenance performed on it.

Most of the issues seen are general wear and tear, but some of the reasons to rebuild an engine can range from a burnt valve, drop valve, blown head gaskets, low oil pressure, drop rod or spin rod bearings, burnt piston, liner leaks, and more.

“It all depends on whether they change oil filters and oil,” Carey says. “That’s the cheapest thing you can put in an engine.”

Whether a new tractor is purchased or the tractor’s engine gets rebuilt or remanufactured depends upon the farmer and his resources.

“The bigger guys are rolling in the new equipment, and the littler guys are rebuilding what they’ve got,” says Aaron Roth, an instructor at the College of Applied Technologies at the University of Northwestern Ohio. “It depends on the acreage that they are farming as to how often they roll a piece of equipment. If they’re trading equipment, then they are ending up with the new Tier 4 equipment with all the fancy emissions stuff on them. But the smaller guys are rebuilding what they’ve got and reusing them.” 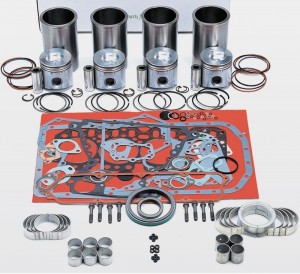 Engine builders interested in taking on diesel farm and agriculture equipment are better prepared these days, as more companies are offering aftermarket rebuilding kits, giving the engine owner a cost-effective rebuild as an alternative to buying a new engine. Photo courtesy of Maxiforce.

When it comes to rebuilding an engine, in most cases, it’s a third the cost of what you could go out and buy a new one for.

“These guys put an investment out of hundreds of thousands of dollars, and even something like a compact tractor is $35,000 to $45,000,” Roth says. “They’ll trade a car every couple of years, but they’ll keep their tractor forever.”

To keep these tractors running well, rebuilders rely on part suppliers. Companies like Maxiforce and Howard Enterprises specialize in overhaul kits and parts to rebuild these engines.

“Our overhaul kit, which is pistons, cylinder liners, piston rings, rod bearings, main bearings and a complete gasket set with crank seals, is probably 50% to 55% of our business,” McCoy says.

The price varies per application, but the average cost for an overhaul kit from Howard is around $300.

For a 4020 John Deere the kit costs about $960, and $930 for a 1066 International. McCoy says John Deere PowerTech engines and Cummins B and C series engines are also popular.

Maxiforce does very well with its overhaul kits as well, which basically include everything in a box to rebuild an engine, according to Kelly.

“The other popular products are the oil pump, water pump, injectors and thermostat, what they call the wear parts,” Kelly says. “Our bread and butter is the John Deere PowerTech engine line. The PowerTech engine is the most popular ag engine out there and covers the last 15 years of John Deere engines.”

Aside from John Deere’s, Kelly says Perkins are also popular engines that he sees getting rebuilt. 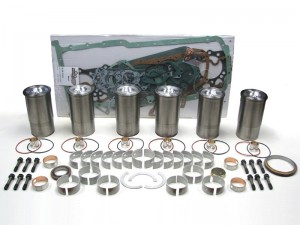 Not all engine rebuilding business goes to local engine shops, however. If the tractors are newer, many people will bring them back into the dealers for repairs and remanufacturing.

Tony Mitchell, a manufacturing engineer in the engine division of CNH Reman, a joint venture between SCR Holdings Corp. and CNH Industrial, says remanufacturing business has been booming.

The future of tractor engines

Aside from newer technology slipping into tractor engines, the other piece of equipment engine rebuilders are starting to see more of are compact tractors. 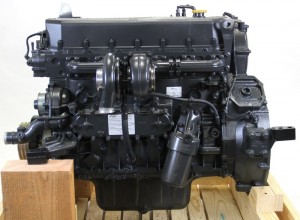 Another Cursor 13 liter engine, these are used in several configurations for different applications. Photo courtesy of CNH Reman.

That’s becoming a very important segment for companies like Maxiforce because there were no parts for these compact tractors. So farmers and engine rebuilders didn’t have an outlet to get parts to rebuild these.

“In the last five years we’ve introduced a line for Yanmar and these small Perkins engines,” Kelly says. “That has taken off big time, and has been the hottest launch we’ve ever done because there wasn’t an outlet for parts for these small-board diesel engines found in these compact utility tractors that every farmer has gotten.”

Compact tractors are going to open up a new opportunity for engine rebuilders because previously it didn’t exist. The engines in small tractors were considered throwaway engines. You sent the core in and they sent you a rebuilt one or a new one. Engine rebuilders want to be able to rebuild customer’s engines and offer a cheaper option than having to buy a whole new engine.

“Compact tractor rebuilding has become a bigger part of the rebuilding business simply due to the fact that instead of having the larger acre farms of 200 to 2,000 acres, now you see people with 20 acres and less and they have a mini tractor,” Scott says. “The newer little tractors are definitely taking over.”

“Those are some of our highest volume engines – the little 25 to 45 hp engines,” Mitchell says. “People are definitely fixing those little tractors as they tear up.”

As with any piece of machinery, sooner or later it’s going to need to be replaced with a new piece of equipment. As technology continues to influence newer models of tractors, the agriculture industry is going to have to upgrade equipment and use the new Tier 4 engines. 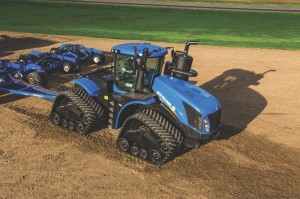 “I think you’ll see the new engines stay around just as long as the older engines,” Mitchell says. “There’s no doubt they can have some expensive repairs, but the newer equipment is like the newer cars – its so much more capable than the older stuff was, has so many more options on it and the ability to do so many different things that the older units wouldn’t, and that makes them a lot more productive tractors.”

While the newer engines are creating a lot of talk, much of it hasn’t been out long enough to really know how it is going to stand up to the test of time like the older equipment has.

“Let them get four or five years on them and then we’ll see,” Carey says.