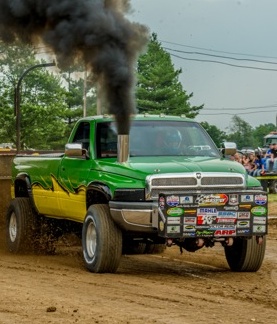 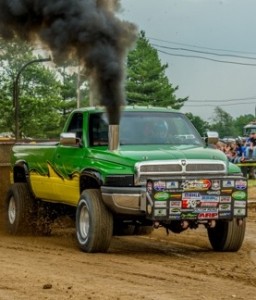 The clouds of black smoke along with the whistling of the turbo bring out a new wave of spectators. It’s all about the rumble and feel from the massive foot pounds of torque, not the horsepower. Who would have ever thought that a diesel engine would gain respect in the world of performance?

Now, it’s not uncommon to see a diesel powered dragster travel the quarter-mile in 8 seconds or an everyday work truck enter the Saturday night sled pull. The diesel engine, which was once considered a clanking bucket of bolts, has brought about a new era of drag racing and sled pulling. As diesel engines have become more technologically advanced, efficient and reliable, they are loved by members of all generations. Whether the enjoyment is from the ease at which we pull our camper or the fact that we can take our work truck to the dragstrip on the weekend, diesel performance is in full swing.

With the help of the aftermarket, more performance can be gained from simple add-ons such as ­programmers, cold-air intake ­systems, exhaust systems and turbochargers, to all out hardcore engine internals.

Torque is what you feel in the seat of your pants on the take off. Or, the low down grunt when pulling loads up steep grades at a low RPM. There are several factors as to why the diesel produces that low down RPM torque. There is a combination between the long stroke, boost and compression ratio. The 6.7L Cummins has a bore of 4.21”, but has a stroke of 4.88”. Longer stroke means that the pistons and connecting rods create more leverage on the crankshaft. When the intake valve opens, air is pushed into the engine from the turbo directly into the cylinders. There is no throttle blade as in a gasoline engine. There are no restrictions to cylinder filling other than the intake valve itself. The compression ratio of the 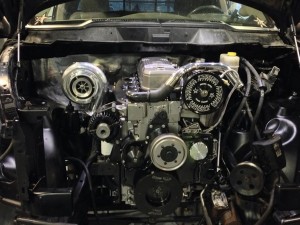 Here’s a sneak peak under the hood of a mid-sized Cummins powered sled pulling truck that is under construction. With the growing popularity of the mid-size diesel, specialized companies are catering to the growing demand for more power.

Then, right before Top Dead Center, fuel is injected into the cylinder. The atomized droplets of diesel fuel are vaporized and start to burn rapidly which pushes on the piston causing the crankshaft to rotate.

The diesel fuel being vaporized by the heat and pressure becomes very efficient since the heat generated was used for ignition. A diesel engine can run on very lean air fuel ratios (referred to as stoiciometry) as high as 50:1 under cruising conditions compared to 14.7:1 of gasoline. The increased compression ratio of the diesel engine along with the longer stroke of the crankshaft calls for a heavy-duty rotating assembly made to withstand extreme cylinder pressures. The heavy internals also limit the amount of engine speed. The engine usually reaches peak torque around 1700 RPM and maximum horsepower at 2800 RPM.

The Cummins diesel engine has ­become extremely popular as the choice for performance. Even though there are other diesel engines such as the ­Duramax and Powerstroke (which can make power also), the Cummins has always been one of the founding forefathers of diesel power. Cummins gained a lot of notoriety in 1989 with the introduction into the Dodge truck with a 5.9L, inline six cylinder, and turbocharged diesel engine. From there, the 5.9L and the later 6.7L, have proven reliable and dependable, giving them more favor to consumers. The love of the Cummins engines by consumers has opened up the ­opportunity for niche markets in the growing demand for more Cummins 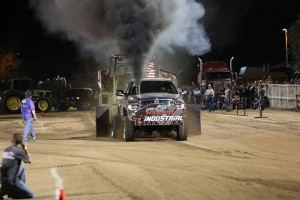 A mid-size Cummins diesel power display on a Saturday night sled pull, producing more than 1,300 reliable horsepower “at the wheels.”

One common place that Cummins performance can be found would be sled pull competitions. Sled pull competitions are divided into classes that are limited to the turbo inlet size. For instance, if you were pulling in a 3.0 class, then the turbo inlet size of your combination would be limited to 3.00”. It is often wondered as to what modifications are done in order to reach the amount of power output along with engine RPM that is seen at these competitions. A lot of modifications can be seen on the outside, but there are rare opportunities given to see the actual working internals of the power plant. There are several Cummins builds that can be found in the media, but the question is often asked as to what works and what is truly needed. Of course, that depends on the application, but we wanted to see what Cummins build is on the track and what combination seems to be working for them.

We were invited in by Industrial Injection, a diesel parts supplier based in Salt lake City, UT, to get a sneak peak at some modifications that are used for their sled pulling applications.

The engine build starts with a stock 6.7L block. The factory blocks are very strong and if the combination is right, structural integrity is not the problem. The blocks are usually bored no more than .020” (yielding a 4.230 bore) and then deck plate honed. Deck plate honing is very important to any engine build for proper cylinder surface. Even though the Cummins block is very rigid, the cylinders can distort as much as .003” when the cylinder head is torqued down. If the block is not properly honed, .003” cylinder 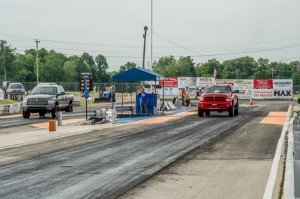 Across much of the Midwest, diesel drag races have become a popular event in the rural areas. Photo courtesy DIESEL Motorsports/Eric Sullivan

distortion can lead to serious piston scuffing especially with the amount of cylinder heat along with major blow-by.

The block is then decked and fitted with custom billet freeze plugs. (Check out YouTube video Blueprint Cummins)

The surprise for the rotating assembly was the use of the factory 6.7L crankshaft, which yields a stroke of 4.88”.

Remember, in a Cummins engine, the lifters go in from the bottom. So the lifters and camshaft are fitted in the block before the rotating assembly.

After the rotating assembly has been placed into the block, a 5/8” thick main bearing cap Gorilla Girdle made by Industrial Injection is installed. The purpose of the main bearing girdle is to increase block rigidity and torsional stiffness by tying the main caps and oil pan rails together. The Gorilla Girdle is CNC machined and when installed it stabilizes and strengthens the bottom of the block and evenly distributes crank load across the main caps eliminating main cap walk. 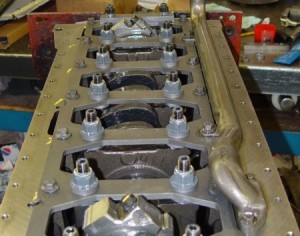 The “Gorilla Girdle” is a proprietary machined piece used to prevent main bearing cap walk by linking all of the main bearing caps together and to strengthen the block by being bolted to the oil pan rails.

Various valve angles are used on the valve seats and custom valves, but the ports still utilize the stock diameter valve sizes. Custom valve springs are installed but the stock retainers and factory rocker arms are still used.

On the deck surface of the cylinder heads, .105” fire rings are milled and special head gaskets are installed for extreme cylinder pressures. The pushrods are a forged one piece design and increased in diameter to 10.90 mm.

When the cylinder head modifications were performed, the intake manifold was milled off for access to machine the intake ports. The cylinder head was then machined to accept a ZZ Fabrications intake, which was designed specifically for this sled pulling application for their engine build and boost application. They also custom build aluminum intake manifolds machined to accept the factory common rail fuel system, sensors and heater grid for the 5.9L and 6.7L applications. 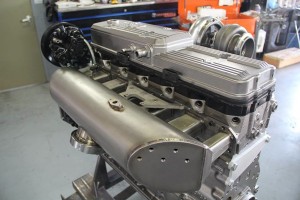 The new intake manifold is being fitted where the old one was milled off. ZZ Fabrications developed this Cummins intake for this particular sled pulling application.

To feed the 1300 horsepower 6.7L engine, a rail injection system known as Double Dragons is used. The Double Dragons are twin Bosch CP-3 common rail pumps that have been modified to pump 120% more than stock. This amount of fuel is needed because the injectors are rated at 500cc’s. These injectors are for high horsepower applications also known as Industrial Injection “Cobra” injectors.

The induction system consists of a 91mm custom single turbo for the 3.0 sled pull class. The turbo is mounted to a custom fabricated exhaust manifold which is pulse tuned for maximum turbine speed for this RPM application.

Compressed air from the turbo is directed through a custom-built water to air intercooler manufactured by a company called Frozen Boost. One thing to absorb when you see the pieces of this Cummins build with the modifications to the cylinder head, block and fuel system, is that you get an idea of what goes on to achieve incredible amounts of torque and power.

For a relatively small displacement in-line six cylinder diesel, this engine cranks out more than 1,300 horsepower and will turn 5,200 RPM. This power is seen on the chassis dyno being made at the rear wheels. That places the torque output of the engine in the 2,000 ft. lb. range.

If you own a Cummins powered truck with an automatic transmission, there is one thing to think about when doing any modifications. 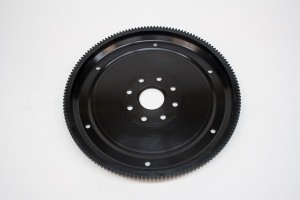 For highly-modified Cummins engines, PRW offers a Signature series flexplate that is CNC-machined from 5140 billet steel that has an SFI rating of 29.3 that can handle over 1500 ft. lbs of torque.

Take for instance the 2013 6.7L engine. The factory horsepower rating is 385 @ 2800 RPM. If you begin upgrading your engine with some performance bolt-ons, that engine can produce well over 500 horsepower. Something to consider would be also upgrading the flexplate.

When reaching the 500 hp mark, the factory flexplate tends to crack and come apart. An easy solution is to replace the factory steel flexplate with an upgraded steel or machined billet flexplate.

To remedy the on-going problem of a broken factory flexplate occurring to many of these sled pullers and drag racers, as well as everyday work loads, PRW has introduced two versions of flexplates for different performance applications of the 5.9L and 6.7L engines. One version, the Platinum Series, is cost effective and machined from cold rolled steel and manufactured for the everyday driver needing some insurance. The Platinum Series is designed for stock replacement where the engines have been fitted with performance add-ons and upgrades that propel the engine to over 500 horsepower. This flexplate has a 4mm thick center plate with double welded starter ring gears and is SFI 29.1 certified.

The other version, known as the Signature Series, is a one-piece billet steel forging made to withstand over 1,500 ft. lbs. of torque. This flexplate is CNC-lathe machined from 5140 billet steel that is SFI 29.3 certified and coated with a long lasting black oxide finish for rust prevention. The Signature Series flexplates are precision balanced and offered for 5.9L and 6.7L applications also. 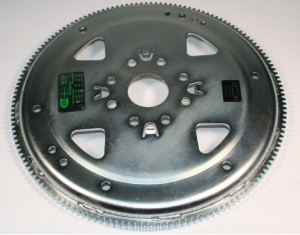 So whether you are a sled pulling fan or just getting into this side of the performance market, keep on the lookout for the latest Cummins-powered engine from Industrial Injection known as the “Black Pearl.” This custom Cummins power plant produces insane power levels reaching into the 2500 horsepower range. 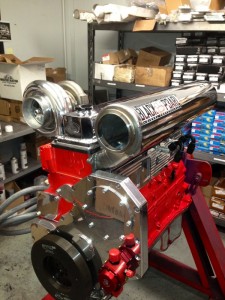 An upcoming Cummins Performance engine project that Industrial Injection (www.industrialinjection.com) is working on is labeled the Black Pearl. While the engine is still in the research and development phase, preliminary dyno testing has shown more than 2,500 horsepower. We will keep you posted with more details soon.