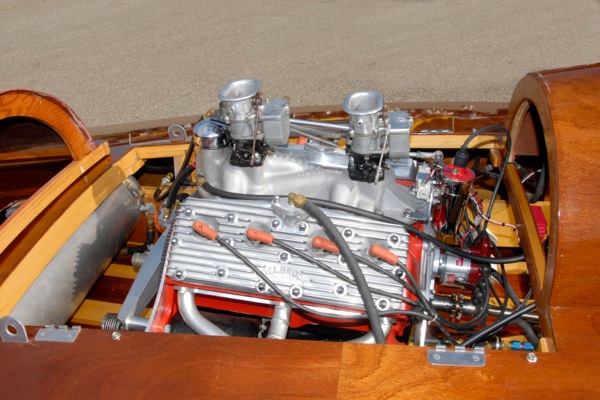 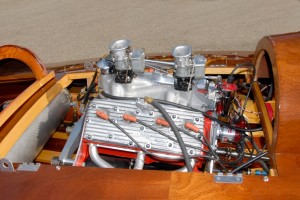 Aftermarket additions to this V8-60, which is mounted at a slight angle in a race hydroplane, include Edelbrock heads and intake and the ever-popular Stromberg carbs.

It was special in so many ways. First of all, it was the first V8 engine for the Ford line of cars. Nobody could imagine the effects it would have on the racing and hot rod world in the years to come. Even in its stock trim, it was a gutty little powerplant, but it would serve as a basis for many performance versions in the years to come.

There was so much that could be done to these engines, and since there were no professional engine builders at the time, the drawing board was a blank sheet of paper for thousands of creative minds to address. Just about everything was tried, including carburetors of varying numbers, fuel injection, supercharging, boring and stroking, relieving, and on and on.

And as surprising as it may seem, the engine still lives today and can be found in modern land speed, hot rods and other types of performance vehicles. A large number of aftermarket parts are available for the flathead. The magnetism is still in place, maybe it’s all those stud bolts peering out from the heads that gets the attention of modern engine builders.

But it must be noted that the flathead term does not just signify one single engine. There were actually initially several versions of the Flathead, but only three that attracted period engine builders who would modify them for motorsports endeavors. The smallest was the so-called V8-60 with the 60 indicating the stock horsepower it acquired from its 136 cubic inches of displacement. There were two later versions displacing 239.4 and 255.4 cubic inches, with 85 and 100 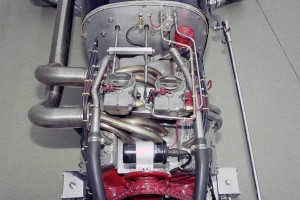 This V8-60 shows its upgrades in the form of aftermarket heads and intake manifold and a pair of Stromberg two-barrel carbs. According to Greg Silveira of Silveira’s Machine Shop in San Jose, CA., what’s interesting with this setup is that it was made to run in reverse. So, the intake is the exhaust and the exhaust is the intake. You can see the header’s on top. Normally they would be on the lower part of the engine. This was done to the large Flathead V-8’s and later on even in overhead engines. The purpose was to apply more torque to the left wheel since it is running in reverse and the rear end was flipped.

horse ratings. There was also a little-used flathead, a 221cid V8. It was forgotten in racing, but in 1935 it would be on display at the world’s biggest race.

The V8-60 engine holds a special position in the history of midget racing. It was known as the “Poor Man’s Offy” referring to the pure-race Offenhouser four-cylinder powerhouse. It was originally planned to be a car engine, but it was just too small for that mission. But it was perfect for the small open wheel midgets, and was still a competitive machine on the racetrack into the 1960s. And also, It was a perfect fit for the A Modified and S Stock hydroplane classes.

The engine builders were often the guys that bought the engines. There were many available aftermarket parts while some 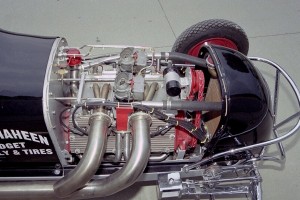 In post-war midget racing, a dual-carb, aftermarket heads V8-60 set-up like this was a common sight.

of the more skilled fabricated their own parts. The most common pieces that were added to the V8-60 included heads, cams, intakes, carbs, and exhausts.

Each of those engines had its individual touch of its engine builder.

The little V8-60 flathead engine had three main bearings, along with a 3.2 inch stroke and a 2.6 inch bore. Its compression ratio was only 5.61 with its twin water pumps placed in front of the block. It was introduced in the United States in 1937, and would continue to be improved through its years of production. Included were a new combustion chamber shape, aluminum heads, substitution of a Stromberg two-barrel carburetor, and the use of steel pistons instead of aluminum.

Longtime engine builder Rich Willim is one the masters on the modification of this smallest of the flatheads. He has been involved with the V8-60 for more than six decades, both as a builder, a competitor using a self-modified V8-60 in hydroplace racing, and the author of one of the V8-60 bibles with his book, “The V8-60 Ford’s Little Powerhouse.”

He explained that the actual horsepower of the V8-60 was not well known, but the word was out that an Edelbrock- 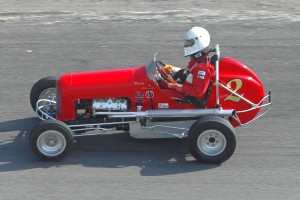 Engine builders often investigated different crankshafts for use on the engine. Willim explained, “There were some racing modifications made to cranks. Edelbrock, Claysmith and Eddie Meyer were the prime crank modifiers. The work involved providing extra clearance on bearing surfaces and reducing the  weight of the counter weight which resulted in better rotating-assembly balance. In addition, custom 180 degree cranks were produced by Norden which produced huge torque.”

Cams were abundant for the V8-60 engine builder, the most popular being the Winfield, Claysmith, Herman & Collins, Weber, and Isky. Willim explained that the Winfield had a pair of cams to be used with stock valve springs with performance gained in the valve timing. Claysmith had a pair of cams, one for midgets and one for race boats. The Isky cams appeared in great numbers with high torque, short track applications. The hottest of the Isky cams was the so-called 620BS, which could only be acquired as a part of a complete Edelbrock engine. 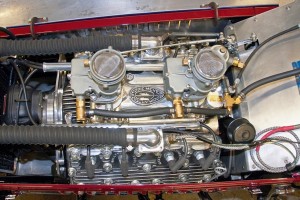 This V8-60 is garbed in Eddie Meyer aftermarket parts with both heads and intake, in addition to twin carbs.

Since drag racing was mostly restricted to the streets in the post-war period, the V8-60 was used in that application. But during the early 1950s, the best place to demonstrate speed was in high-speed racing on the Bonneville Salt Flats and other long, clean, desert surfaces. One of the smallest of those racers was formed by a WWII bomber belly tank. Inside, there was room for the driver and an upgraded V8-60 engine. With its clean aerodynamics and V8-60 power, these mini machines were rockets.

Willim indicated that, like the cams, there were also a number of aftermarket performance pistons which found their way into V8-60 race engines. “The most popular piston builder was by far the Jahns  brand, and few engine builders looked any further. Pistons came in sizes varying from stock to a 170-inch overbore, Also, Mickey Thompson produced aftermarket rods for the V8-60,” he said.

The aftermarket cylinder heads from Edelbrock, Offenhauser, Weiand Sharp and Eddie Meyer were the leaders of the pack. It was possible to considerably increase the  V8-60 compression ratio with all of them, up  to 10-1 in some cases.

The most visible indication of an upgraded 60 was the appearance of multi-carburetor intake manifolds. The key to this 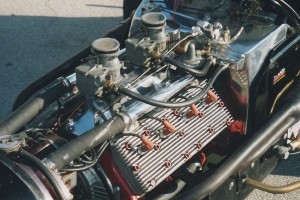 This nifty midget is fitted with aftermarket heads and and twin carbs.

modification were the intake manifolds. The two-carb Edelbrock intake had an excellent reputation. There was also a two-carb version built by Smith and Jones. But some other engine builders felt the more the merrier and built both three- and four-carb versions.

Without a doubt, the most popular carbs used with the V8-60 were the Stromberg two-barrel carbs which could easily convert to run methanol.

There was one other member of the flathead family, the 221 V8, which was the first of the flatheads to be produced. It appeared to have all the qualities to be modified for high ­performance and racing. It was first produced from 1935 to 1941.

With stock iron heads, it produced 94 horsepower and had 155 pound-feet of torque. But there was no place for it with stock cars or open wheel machines, which were monopolized by the 136 and the larger 239/255 family.

It was then that Henry Ford decided that it was time to go racing. He selected Indianapolis where he fielded a small 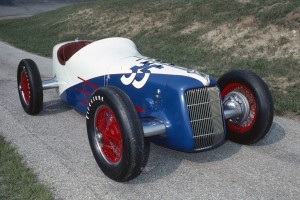 Surprisingly, the 221 flathead engine was ­selected to power 10 Indy Cars at the 1935 Indy 500. Each carried four carburetors, but the results were pitiful.

number of cars to compete in the Indy 500. The engine that was selected was the 221, which was equipped with an aftermarket block and four carburetors. The engine developed 150 horsepower, but the experiment failed miserably. Of the 10 cars that were entered, only four qualified and none of them finished the race. Granted, it was a late decision, but some of Fords finest engineers and engine builders tried to make it work.