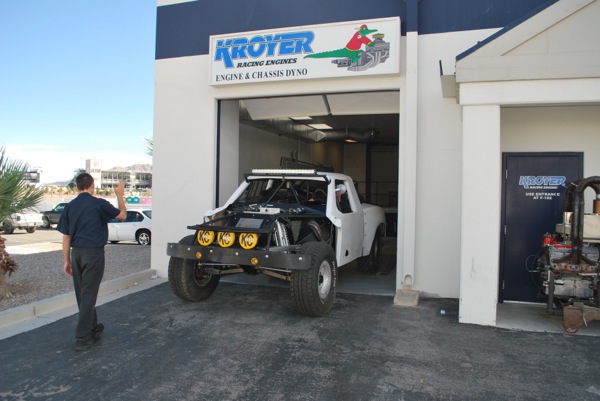 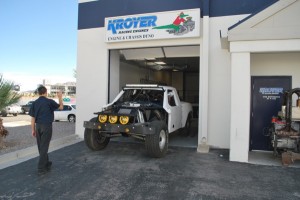 The staff of Engine Builder and a panel of industry professionals, including presenting sponsor Driven Racing Oil have selected Kroyer Racing Engines of Las Vegas as their choice for the “Performance Engine Builder of the Year” award for 2013.

Kroyer Racing Engines’ partner, Kevin Kroyer has been involved in racing since he was a kid. He got his start building engines after he answered an ad in a local off-road trade magazine for Walker Evans Racing.

He became a Walker Evans mechanic in 1989 and spent 10 years at Walker building various forms of small block and big block Dodges, doing V10 development for Chrysler, building V6 engines for the Dodge-Chrysler brand for off-road and helped Walker bring back one of the first Dodges to the NASCAR Super Truck Series.

Walker Evans actively retired from racing in 1999 and at that point Kroyer had the opportunity to move to Las Vegas and form a business building race engines for Brendan Gaughan. Brendan’s dad, Michael Gaughan, owns the South Point Hotel and Casino and was moving his NASCAR operation out of Walker’s shop into a facility in Las Vegas to start Brendan’s NASCAR ­driving career.

Michael asked Kroyer to come along and build the engines, and that partnership gave birth to Kroyer Racing ­Engines, which opened on January 1, 2000.

KRE started off as a pretty basic shop – although being well funded by Gaughan, the shop was able to put into place certain equipment that most other engine shops have to wait years for. KRE was set up across the street from the race team in a 5,000 sq. ft. building where Kroyer added a dyno, machine equipment and assembly bays to start building engines for Brendan’s career, which incorporated Winston West and became NASCAR Craftsman Truck ­Series racing.

Brendan went to Craftsman Truck full-time in 2002. In the meantime, KRE moved into 7,500 sq. ft. of space, added a chassis dyno and found its roots as a shop and as an engine business by taking care of the NASCAR stuff for ­Brendan and his teammates, but also by helping out Kroyer’s old friends in the off-road circles. 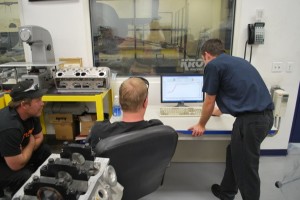 Kroyer Racing Engines, a leader in the off-road market, says its “Race Ready Complete ­Powertrain Packages” help elevate them in the performance industry.

A local Las Vegas off-road trophy truck racer named Brian Collins, who also helped build the shop Kroyer is in now, had KRE help him build some engines and transmissions, which brought the shop back into the off-road market. KRE balanced between NASCAR and off-road until Brendan’s NASCAR team closed down at the end of 2007 and he moved east where he is still racing Nationwide Series for Richard Childress Racing to this day.

Kroyer and his team were able to keep their off-road roots growing enough to where 98% of the shop’s business was off-road in either endurance off-road or short course off-road racing.

Today, KRE supports a half dozen off-road series in what they call short course or closed course off-road racing such as the Lucas Oil Off-Road Series, and endurance series like Best of the Desert and SCORE International ­Off-Road Racing.

In KRE’s 14-year history, the shop has done a lot out of its stable – from NASCAR Winston West series with Chevrolets, Fords and Dodges where KRE has three championships, roughly 28 victories and nine Craftsman Truck victories, to building 2-valve, 2-cylinder Polaris’, 4-valve carburetor injected Hondas and 2-valve V8 Fords, Chevrolets and Dodges for various off-road markets.

In 2003, KRE even did a program to help GM develop an ecotec for a Cavalier that was a turbocharged 2L in a pro front-wheel drive sport compact NHRA class that managed to win a championship by setting six national E.T. records and speed records in one season. Kroyer admits the shop has built a varied amount of racing engines, but a majority of the focus has been on off-road racing engines.

Kroyer’s determination to keep building better engines continued to allow the shop to grow its reputation and its size. In the last 14 years, KRE has added more square footage to the engine shop side and put in a second engine dyno, a spintron and most of the machinery to do any of the work that KRE needs to in house.

KRE also expanded to another building across the street where it has another 13,000 sq. ft. that encompasses manufacturing, four more CNC machines and its differential and transmission businesses. 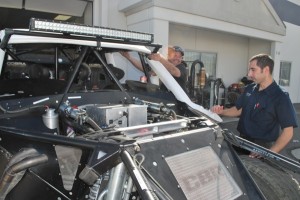 With its crew of experienced professionals and state-of-the-art equipment, KRE is able to develop, improve and build a variety of engine packages. Learn more about KRE at www.kroyerracingengines.com.

From the semi-humble beginnings of 5,000 sq. ft., KRE operates in 23,000 sq. ft. today, and Kroyer says its a big accomplishment that couldn’t have been achieved without the guys he has working for him and the talent and hard work they have given to help grow the business.

Today, that team focuses on bigger cubic inch small blocks. In the endurance off-road racing application, the engines are anywhere from 427 cu.in. – 480 cu.in. small blocks, all fuel injected that have to run 1,000-plus miles at a time in extreme conditions.

On the opposite side, the short course off-road series engines KRE builds for the Lucas Oil Off-Road Racing Series are 420 cu.in. – 440 cu.in. carbureted small block Fords and Chevrolets.

For Kroyer, a lot of the engines he’s built have been memorable because KRE has had a great deal of success. A lot of that success is due to what Kroyer calls crosspollination of technology.

By not pigeon holing themselves into building one particular brand or one particular kind of engine over the last 14 years, the team at KRE has been able to take elements of what they learn from one engine build to another. They might be working on some bigger cubic inch 2-valve motors and traditional V8 builds one day, and then smaller cubic inch 2- and 4-valve 2- or 4-cylinder engines another day.

Another point of separation for KRE is the complete powertrain package. What KRE figured out over the years in the off-road industry, especially in the higher dollar classes, is that the biggest thing you have to do is minimize failure. Not only does KRE want to build an engine, but it also wants to make sure that everything that surrounds that engine could go out and have the ability to win a race. 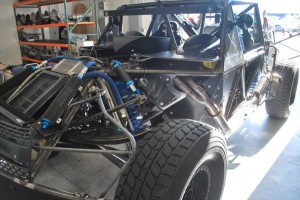 KRE decided a few years back to take on the responsibility of not just building long blocks, but build completely dressed out engines. KRE takes all of the carburetion and electronic fuel injection in house and does all its own programing and specifications for cooling systems, oiling systems and plumbing in the vehicle.

That evolved into a deal with some of KRE’s off-road customers who were having problems finishing races because they couldn’t get quality differential work or quality automatic transmission work. The mainstay of the market KRE is in is a highly modified turbo 400 manual-shift transmission.

So KRE partnered with a company called GearWorks to put out the best manual-shift turbo 400s it could, and that included differentials, making gears, spools, axels, all the way out to lug nuts if necessary for the build. The program has proved very successful for KRE and its partners.

To keep this kind of in-depth program running smoothly, it takes a great deal of effort and involvement. KRE supports 25 to 30 races a season and there’s usually at least two team members at each of the races making sure that everything is right.

KRE makes sure that everybody on the team understands how to best make its engines live as they go across the desert for 1,000-plus miles.

The key to those awards, Kroyer says, was building engines for really good teams. In more recent years, KRE has also won four Engine Builder of the Year awards for the SCORE International Off-Road Racing Series.

But no matter how much success Kroyer and his team see, the most important aspect of building an engine, Kroyer says, is watching your efforts translate into a win.

Advertisement
In this article:Performance Engine Builder of the Year, racing engine

Kroyer Racing Engines is 2013 Performance Engine Builder of the Year