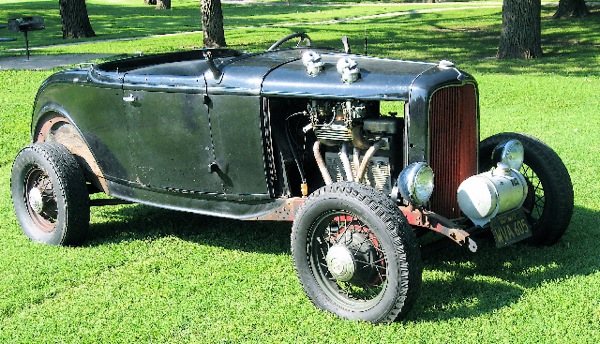 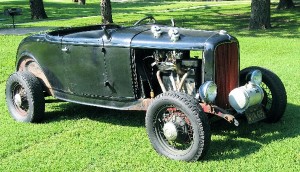 Every antique racecar has a past history. Sometimes that history is well documented, and other times, it gets lost over the years through a succession of owners and events.

In the latter case, you have to judge the car for what it is…what you see in front of you.

The roadster still has the factory four-banger engine with the Miller overhead valve conversion and a rare Thomas intake with two 94 carbs perched on top.

The motor was also converted to a full-pressure oiling system and has Lincoln Zephyr gears in the transmission, a common swap from the era. The car still has the original mechanical brakes and was never converted to hydraulic, as was common in the 1940’s and 1950’s.

There is an old-style Moon tank hanging out front on the spreader bar, the old time racing goggles and leather helmet hanging on the steering column, and the brass fire extinguisher mounted to the passenger kick panel, all things that are correct for the era.

The body is obviously an early ‘32 from the narrow lip on the inside of the top of the doorsill. The body itself is about as stock as Henry Ford built it, with none of the usual modifications found on a purpose built hot rod from the era. The frame is likewise, no cutting, welding, or grinding has been done to the frame, very unusual for a car from this era thus preserving what is now a very sought after body and frame.

There are some period updates, the sealed beam conversion, the vintage under dash gauges, the JC Whitney style interior, 1950 Pontiac taillights, and the 18”/16” big and little wheel combination.

The inside of the tires are cut like the old dirt track racers used to do with a razor knife to get a square corner for better traction. The cut side of the tire should be on the outside for dirt track use, but could have been reversed for the street.

Mike has spent hours and hours tracking down previous owners to gather as much history about the car as he can find. Here is what he knows so far… 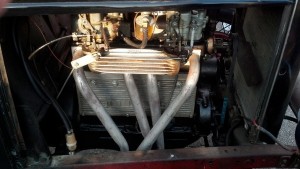 He then sold it to a car collector in Hutchinson, KS, who kept it in his collection for the next 38 years until August of 2012.

During that 38-year span nobody knew what happed to the roadster, it just disappeared and never showed up at any car events. That’s when the rumors and speculations started.

No one seems to know much of the history prior to 1972, either. For example no one knows if it was ever a California car as evident by the 1963 tag on the front of the car.

No one knows if the car has a racing history, or who, or where it was raced. The collector who had it the longest put less than 50 miles on it in the 38 years that he owned it.

One more thing… to add a little mystery to the car.

One Sunday afternoon, Mike was driving home from a car show and it began to rain. Mike pulled over to check the trailer and the car to make sure everything was secure. When he got to the side of the car he couldn’t believe his eyes.

“Miller Engineering” was printed there on the side of the car  — the letters spelled out just as plain as day.

Running around to the other side…the lettering was the same on that side too.

It had showed up when the car got wet, but couldn’t be seen when the car was dry. The now black lettering was clearly once a dark maroon color and looked to be professionally done, but had been painted over with a brush, allowing some of the maroon color to bleed through.

Who lettered the car and when, is yet another mystery surrounding this car.

Mike has been collecting cars for more than 40 years and he will tell you that once in your lifetime, you will get a chance to own a rare and unique car that is the car of your dreams.

He found his, as well as some new letters for the car — “NOT FOR SALE.”

Advertisement
In this article:Ford, historical vehicles

Looking for a Lost '32 Ford Roadster