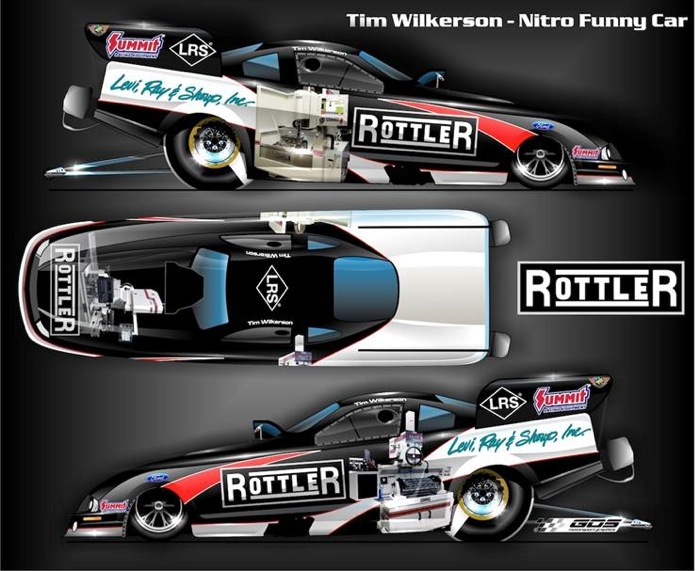 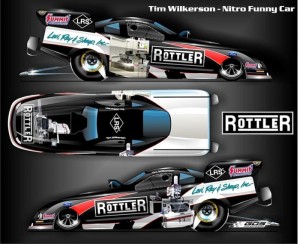 Rottler Manufacturing, a leading maker of machinery used in all facets of the performance engine-building arena, has joined Team Wilkerson Racing as a technology partner for the 2014 season. In addition, Rottler will be the featured focus on a special-edition Shelby Mustang body during the 2014 O’Reilly Auto Parts Northwest Nationals, at Pacific Raceways. The special wrap will include images of three Rottler machines, the company’s corporate logo, the Levi, Ray & Shoup logo, as well as that of Summit Racing Equipment. The company is located in Seattle.

Tim Wilkerson, owner/tuner/driver of the Levi, Ray & Shoup Funny Car, added a Rottler SG9M, a seat and guide machine for cylinder heads, to the team’s machine shop in 2013, as well as a VR7 mobile valve refacer in the team’s transporter. This year Wilk and his team will add a Rottler F79A, a multipurpose machine used in performance engine building and servicing. Wilk’s favorable impression of Rottler’s products led to further discussions which eventually led to this marketing and technology partnership.

“They make fantastic machines that we need in-house if we’re going to remain contenders on the NHRA Mello Yello tour,” Wilk said. “Our machine shop is a busy place, and we’re able to do our own work instead of having to ship our parts off to be serviced or rebuilt. It’s a really important asset for us, but the thing that impressed me the most was getting to know the Rottler story, which dates all the way back to 1923 when Clarence Rottler founded the company to make portable boring bars. It has remained in the Rottler family since that day, and it’s the largest facility in the USA that’s dedicated to making machines for the automotive aftermarket.

“Our team stopped at the Rottler shop last year, before the Seattle race, and our fascination with the machines they make was kind of mirrored by their fascination with our LRS Funny Car, which led to talking about how we could help them build more business in the racing world. Their customers are engine builders and racers, and the NHRA tour is full of exactly that group of people. This really is one of those mutually beneficial relationships we always talk about, and our goal is to help them build their business in our sport.”

Anthony Usher, Rottler’s Vice President of Sales, was the driving force behind creating this marketing partnership, and he considers it exactly that.

“We’ve never done anything quite like this before, but we’re very excited moving forward with Tim Wilkerson and his Funny Car team, and we have a great vision for this to be a longterm relationship,” Usher said. “We have a number of parallel goals for this partnership. One is to create new business opportunities with NHRA racers and high performance engine builders. Another is to utilize Tim’s car on the NHRA Mello Yello tour as a very big stage for proving and promoting our products. And finally, we aim to be a real contributor to Team Wilkerson’s success. Nothing would make us prouder than to be a part of this team when Tim wins a Mello Yello championship.”

The Rottler logo will be prominently featured on the LRS Funny Car throughout the season, in addition to the one-race special body that will run in Seattle.