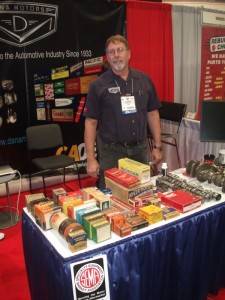 D.K. Kenmonth’s family has been in the engine business since 1933 and now he is selling the parts they saved and collected all those years.

D.K. Kenmonth says that all blocks listed are cleaned, magnafluxed and inspected. “They are guaranteed to a maximum .040 to .060 bore to available pistons,” he told Engine Builder magazine at the SEMA Show. “It’s our no hassles program: no core charge, no wasting time in wrecking yards, no chargebacks to your customer when his Internet-sourced core junks out.”

Kenmonth’s company has been providing professional automotive machine services for over 50 years. He says that he can even find collectors engines he doesn’t have listed and can sometimes supply “matching-numbers” engines for $200 above regular prices. If you have a car like a Corvette or Mustang where matching numbers increase the vehicle’s value, $200 is a song.

Kenmonth was at the November SEMA Show with a bunch of engine parts in cool-looking old-fashioned boxes. He has been collecting obsolete engine parts for as long as he can remember. He says that it took him decades to accumulate those boxes and the NOS (new old stock) and NORS (new old replacement stock) engine parts inside them. He has parts from the ‘30s, ‘40s, ‘50s, ‘60s and up.

“I spent a long time working as an engine parts specialist and I started keeping the parts that we never sold,” Kenmonth explained. “The parts manufacturers would discontinue an item and I just kept them, rather than throw them away. I moved them off the front line to an obsolete line code. Now, I have a lot of engine parts that collectors and restoration shops need to fix old motors.”

Kenmonth’s grandfather Alton S. “Kenny” Kenmonth worked as a wagon jobber in Los Angeles in the early years of the 20th Century. He sold Vitaloy pistons and Pacific piston rings out of the back of his car. He made face-to-face sales calls on the shop owners there who rebuilt engines. “Alton would pick up the piston/rod assemblies, take them to his garage for cleaning and rebushing, cut the ring grooves for G.I. spacers and return the ready-to-install assemblies.

“In those days the engines were built in the chassis,” D.K. emphasized. “Cylinder boring was done with the engine blocks still sitting in the chassis. The crankshafts were also turned in the chassis.” Alton Kenmonth built his business up during the Great Depression. At the start of World War II, Gen. George S. Patton asked him to be a consultant. He was asked to start up a rebuilding plant for the Army ordinance supply chain to rebuild Willys Jeep engines for the war.

­­­­After WWII, Kenny went back to engine rebuilding with his Piston Supply Co. He and Donald Kenmonth — D.K’s dad — ran things. In the early ‘50s, they linked up with the Dana family. “Dana didn’t want to build engines, so they asked my grandfather and my father to supply engines, crankshafts and cylinder heads for their Sacramento operation. By 1959, Piston Supply owned Dana Motors. “By the early ‘60s, we had nine branch facilities around California and Nevada,” D.K. recalled. “We stocked engines, cylinder heads and engine parts.”

In 1968, following Kenny’s passing, the company split and D.K. and his dad moved to Sacramento to operate as Motor Warehouse. In 1974, D.K got out of college and joined the business. “We continued building engines in Sacramento until 1981,” he recalled. “Then, we focused on machining parts and selling master kits — a kit being a crankshaft, bearings, pistons, rings, cam, lifters, timing, pump, gaskets — everything needed to put a short block together.”

When Donald retired in 1998, D.K. bought the company and ran it until 2012 when he sold distribution at Motor Warehouse and Commercial Warehouse Center (his factory warehouse) to National Performance Warehouse (NPW) of Miami. D.K. was NPW’s VP of Engine Components during the transition. He also kept the Dana Motors corporate. He now runs Kenmonth Engine Co. and California Obsolete Engine Parts (CAOEP). “We supply NPW locations with machine work and discontinued, hard to find internal engine parts,” he said.

D.K. also found another niche selling NOS import parts for vintage Datsuns, Toyotas, Mitsubishis and so on. “I started buying lots of NOS import parts and, with the help of our computer, we were able to catalog them,” he said. “We have designed and built a website to present them to the industry.”

D.K. says he has 165,000 obsolete part numbers in his computer. “We consider maybe 20,000 of those parts active (regular sellers),” he pointed out. “The other stuff is not very active. We may occasionally get a sale every two or three years, but it’s part of our service. With the Internet I’m hoping for exposure overseas. Maybe there are shops in Asia building old Datsun Roadsters?”

Kenmonth feels the Internet has broadened the purchasing power of the consumer. “If you go back 30 years somebody looking for a Fiat part had to visit a machine shop or store and go through distribution channels to reach us because only the store knew we had Fiat parts,” D.K. explained. “Now, all a customer has to do is Google Fiat parts. We couldn’t fight the Internet, so we joined it and designed a shopping cart website with 21st century search technology. You can type in ‘1955 331 Cadillac valves and the search engine will find those valves on my website because of the way we organized our parts.”

California Obsolete Engine Parts has valves reaching back into the 1910’s. “I don’t even have catalogs on some of that stuff,” D.K. admitted. “About the earliest catalog I have is a 1939 Federal-Mogul book that goes back to around 1928 or so. So some of it, believe it or not, is knowing what you’re looking at. There are times when I have to open the box, take the part out of the box and try to figure out what it is by the specs, because there’s no catalog that exists.”

D.K. says he tries to specialize in the “sweet range,” that tends to be 1928-1975 in terms of old parts. “That’s the sweet spot,” he says. “We don’t get very many ‘80s engine builds, but occasionally we do and we have parts for those, also. It’s more by accident that we sometimes get parts for earlier or later applications.” If someone has a current motor, D.K.’s relationship with National Performance Warehouse (NPW) allows him to offer newer parts, as well.

“I am best known as a West Coast distributor of engine parts,” said Kenmonth. “The California Obsolete Engine Parts end of it is very recent. Over the years, we’d see demand for obsolete parts and I found there was a big need for them. Suppliers like Egge Machine and Kanter have moved more into manufacturing, rather than buying lots of NOS engine parts. So, we’re in a good position in a not-so-crowded niche called the obsolete engine parts industry.”

Green-Lighting Safety in the Shop

Often, addressing green practices in the shop also make for better safety procedures. For example, using an environmental absorbant to address spills in the shop will result in safer floors and protect against accidents.

The following is a list of some shop-related Occupational Safety and Health Administration’s (OSHA) Violations for the fiscal year 2013 (Per its Law and Regulation number) and things to look over in your shop to prevent accidents/injuries:

Commonly violated requirements included failure to have a written program, inadequate employee education and training, improper or no labels on containers, and no MSDS’s (SDSs) or lack of access them.

Common violations were inadequate operator training and refresher training, and poor conditions of PITs when returned to service after repair.

Frequent violations were poor or no energy control procedures, inadequate worker training, and inspections not completed.

Common violations were related to electric shock and electrocution exposures.

Violations included point of operation exposures, inadequate or no anchoring of fixed machinery, and exposure to blades/drills.

Chassis vs Engine Dyno
Connect with us