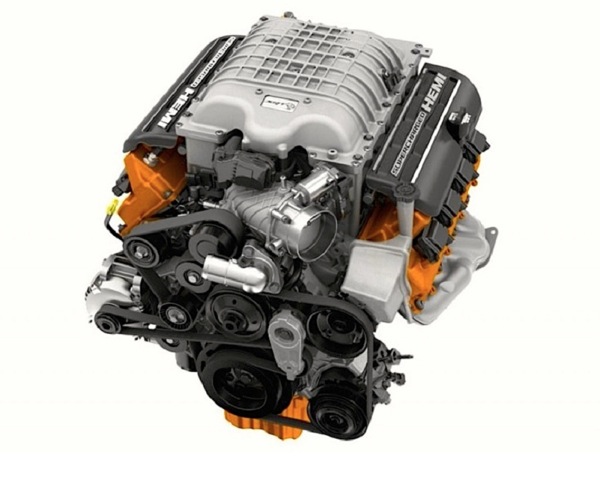 The much-anticipated HEMI Hellcat engine is Dodge and SRT’s first application of V8 supercharger technology, delivering an amazing 600-plus horsepower. 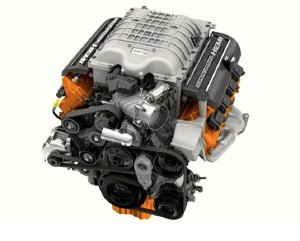 This supercharged 6.2-liter HEMI V8 Hellcat engine is the most powerful V8 engine ever produced by the Chrysler Group.

According to Chrysler, its breakthrough supercharged engine features a forged-steel crankshaft with induction-hardened bearing surfaces. The result is a crank so well-engineered it can withstand firing pressures of 110 bar (1,595 psi) – the equivalent of five family sedans standing on each piston, every two revolutions. And its unique, specially tuned crank damper has been tested to 13,000 rpm.

In May, the newly consolidated Dodge and SRT brands announced that they planned to launch a 2015 Dodge Challenger SRT with the Hellcat engine under the hood. Production is set for third quarter of this year.

“The new 2015 Dodge Challenger SRT Hellcat is the ultimate performance muscle car,” said Tim Kuniskis, President and CEO – Dodge Brand, Chrysler Group LLC. “Dodge is the Mainstream Performance brand, and now combined with SRT, we are able to unleash a true GT car with an all-new driver-focused interior and the TorqueFlite eight-speed transmission combined with the most powerful V-8 Chrysler has ever produced. The Challenger Hellcat has been released!”

The new Hellcat engine has already been extensively tested by the Dodge engineering team, logging over two million hours on the dyno and a series of 24 hour track endurance tests. While the Chrysler Group contends the engine will deliver 600-plus hp, many industry analysts are predicting an output in excess of 650 hp.

According to its engine designers, the blower used on the Hellcat is rated at 2,380 cc per rev, and spins at 14,600 rpm. The twin screw rotors have a special coating to reduce corrosion and to be conducive to higher tolerances and temperatures. Air enters through a port near the driver’s side marker light and is redirected through an 8-liter air box before reaching the blower. Two air to water intercoolers, mounted on the supercharger housing, offer supplemental cooling.

In addition to the supercharged HEMI V8 in the Challenger SRT Hellcat, the new 2015 Dodge Challenger SRT model also will get a power boost with upgrades to the 392 HEMI V8 engine. Horsepower on the updated 392 HEMI climbs to 485 from 470, while peak torque jumps to 475 lb.-ft. from 470 lb.-ft.

Driven by the five SRT performance hallmarks, the new 2015 Dodge Challenger SRT and Challenger SRT with the Hellcat engine are re-designed and totally re-engineered to be the most true-to-form muscle coupes on the market with performance-enhancing technologies inside and out.

Unlocking the Power
For the first time in Chrysler Group history, the 2015 Dodge Challenger SRT with a Hellcat engine will come standard with two key fobs – red and black. The red key fob is the only key that can unlock the full horsepower and torque potential of the Challenger SRT Hellcat engine; while the black key fob limits the driver to a reduced engine output.

When Valet Mode is activated, the following vehicle configurations are enabled:
• Engine is remapped to significantly reduce horsepower and torque; limited to 4,000 rpm
• Transmission locks out access to first gear and upshifts earlier than normal
• Transmission will treat the manual shifter position the same as the drive position
• Traction, steering and suspension are set to their “Street” settings
• Steering-wheel paddle shifters are disabled
• Drive Mode functions are disabled
• Electronic Stability Control (ESC) is enabled to Full-on
• Launch Control is disabled

The driver can activate and deactivate Valet Mode with a four-digit PIN code they create.