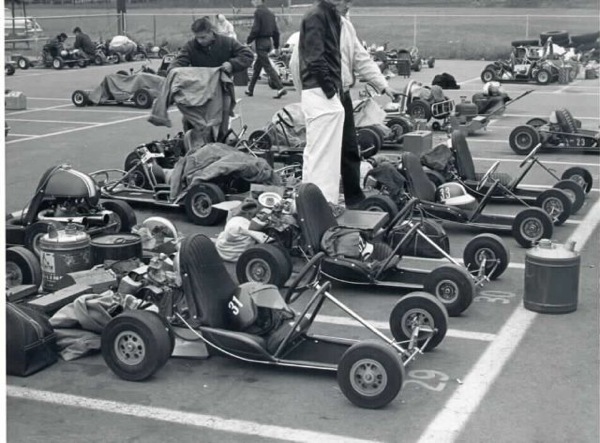 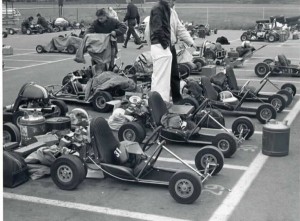 The year was 1956. Art Ingeles is a veteran Hot Rodder who spends his days working for the Kurtis Kraft Company.

The company was founded by Frank Kurtis who built his first midget car chassis in the late 1930s.

In his off hours, Art designed and built a lightweight tubular chassis that was strong enough to hold his 210-pound body. To that frame, he added a set of semi-pneumatic tires and a simple steering mechanism.

He then rounded up a surplus West Bend 2-cycle lawn mower engine and attached that behind the seat. Using a steel sprocket gear on the engine and another on the left rear wheel assembly, he connected the two using a bicycle chain. Adding a gas tank and some controls and Art had a car…of sorts. When Art drove his new creation in the back alleys and tennis courts in the neighborhood, crowds of people would gather wanting to know where they could get one of those little cars.

Fast forward…its 1958 and Duffy Livingstone and Roy Desbrow are partners in a muffler shop called GP Mufflers located in Monrovia, CA. Both Duff and Roy are quite handy at fabricating and building projects out of metal. 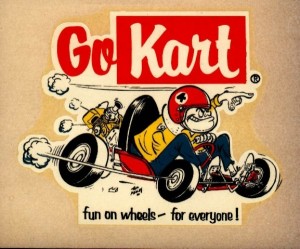 After seeing Art’s creation the two partners decide to build a “car” of their own.

They ended up building a couple of extras for friends including one for Bill Jeffery who in exchange did the upholstery for all of the cars.

Bill Rowles a local sales rep and a regular at the GP Muffler shop, found a source for cheap 2-cycle West Bend engines from a bankrupt rotary lawn mower company. The GP Muffler Company was officially in the “kart” business.

The GP-built karts were officially named “Go Karts” and were offered for sale via mail order for the modest sum of $129.00

Business was brisk so the three partners formed a loose partnership and continued to work out of the GP muffler shop for the next two years.

Soon, an average of 30 orders a day began arriving in the mailbox. It was time to get serious.

The partners formed an official corporation and rented a five-acre ­facility in Azusa, CA from the Aero Jet General Corporation.

A test track was built at the new facility and the company formed a factory race team to promote its product.

Marketed as a purchase that would be fun for the whole family, a typical kart would run about $130 in the 1960s, and ­provide some engine enthusiasts the opportunity to try and gain more power from an ­engine.

The company also had a converted bus that hauled the team to regional events throughout California.

Its closest competitor, the new upstart Bug Engineering Company, was located literally down the street from the Go Kart company.

Competition was intense between the two companies – both off and on the track. The teams would often race their transport buses between events.

According to one report, Bug Engineering was producing as many as 320 complete vehicles a day.

By 1962, (the peak of the karting craze), there were more than 30 manufacturers building karts.

The Go Kart was the original and soon attracted the attention of an unlikely buyer…Art Linkletter Enterprises (ALE).

The Go Kart Company partners ­declined the offer in part because the proposal gave immediate control, ­including the day-to-day management of the company to Art ­Linkletter Enterprises. 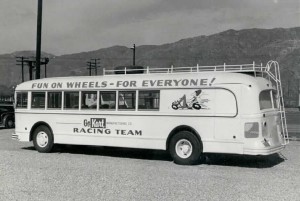 The Go Kart Company used a renovated bus to haul its race team around parts of California during the “kart craze” days.

The Go Kart company was convinced that ALE did not have the ability to properly manage the company.

Ironically, the Go Kart Manufacturing Co. would find itself in bankruptcy less than a year later, due in part to the recession and declining sales of the karts.

The karting craze was ending as fast as it began.

Meanwhile, the Go Kart company continued to spend money even though sales were steadily falling…which forced the company into bankruptcy. They would not be alone; many like companies would go down the same path.

One bit of irony concerning the Go Kart Manufacturing Company is that for a couple of years prior to its bankruptcy, the company was involved in a legal battle over the “Go Kart” name.

Fox in turn filed a motion in court to have the Go Kart trademark name dissolved, claiming the name was generic. The court battle continued, and remained undecided. 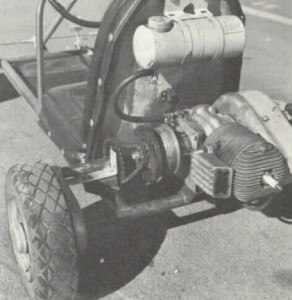 By the early 1960s, there were nearly 30 manufacturers building the popular, yet simple, kart racers.

When the Go Kart Manufacturing Company ended up in bankruptcy, the Fox Company bought the Go Kart name from the bankrupt estate for just a few hundred dollars.

A few years ago I was lucky enough to track down an owner of one of those early racing karts. It was well hidden in the rafters of his garage where it had been for close to 40 years.

I asked to buy it, but it was not for sale.

Lots of fond memories he says. “We took the stock motor milled down the head, stroked the crank and a few other things that everybody else had figured out and we were getting 8 to 10 horsepower from a once stock 5 horsepower engine…That was not good enough, so we decided to add a second engine on the other side.

During a test lap on a side street early on a Sunday morning, the local policeman clocked me at 77 miles an hour.

He was impressed at first, then we had a little talk.

“My buddies and I had a flash of guilt and common sense when we stopped to realize how fast that was when you are literally riding four inches off the ground,” the classic kart owner explained.

“All it would have taken was one pothole or a small rock to wipe me out for good, not to mention a car pulling out from a side street. I have kept the kart all of these years as a reminder of the fun we had, but also as a reminder of how lucky I was, and how things could have ended up a lot different…”

I still want one of those karts, even now that I am old enough to know better. I grew up riding dirt bike motorcycles instead.

Oddly enough, in my neighborhood, the parents considered dirt bikes to be safer than Go Karts because they did not go as fast. Little did they know!

Advertisement
In this article:Go Karts

Reflecting on the Go Kart Kraze