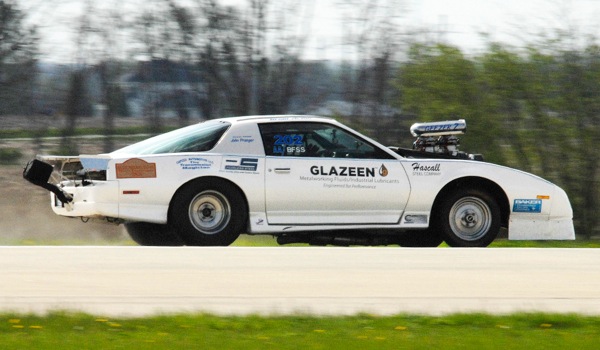 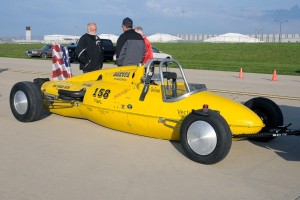 The engine for the Lakester machine is an LS-1 modified to make a thousand horsepower at the crank.

In the December issue of Engine Builder, our cover feature examined the unique one-of-one engine build-ups to maximize performance in all-out speed runs. The article also noted the presence of a new land-speed location at the former DHL facility at the Wilmington, Ohio airport.

The  super-smooth 9,000-foot runway is perfect for this high-speed activity and has garnered interest from all over the country. Since the first article just barely touched the innovation of these engine builders, it was decided to take another look at some more of these unique powerplants.

Owned by Don Gilmore of ­Pittsburg, PA, this machine was in the  158/BFL Class.

The 5.3L engine is mounted in a 2900# 2002 Chevy Avalanche pick-up. The engine is hyped up with a turbocharger from a Cummins Diesel pick-up which provides about 30 pounds of boost.

The engine carries stainless steel valves but a stock crank and produces about 750 on the dyno and 1,000 at the crank, and burns an E-85 methanol blend. Gilmore explained that the E-85 works well with the turbo.

This 3,600-pound Pontiac at speed at Wilmington where it has a best speed of 218+ miles per hour.

This AA/Blown Fuel ‘82 Firebird is owned by Grand Rapids, MI native John Planger, and its Bowtie 8-1 powerplant has been bored and stroked out to 550 cubic inches. It’s based on a Dart aluminum block, a Callies Crank, Oliver Rods, Weind Intake, Diamond Pistons, and  Brodex Heads. But the real power booster comes from the Bowers 8.71 blower 30% overdriven.

Although it’s putting out a big-time 1,050 horses, Planger indicates he could use more. ”I like the E-85 fuel we use as it acts like an intercooler with the supercharger,” Planger explained. Weighing in at a hefty 3,600 pounds, the swift Firebird’s best run came at Wilmington with a 218.47 mph jaunt. No improvements are planned for the powerplant in the near future., 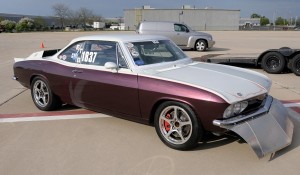 This ‘66 land speed Corvair looks stock from the outside, but that sure isn’t the case under the body.

New Yorker Jim Dunn has one interesting speed run machine with his Corvair, but under the skin it’s certainly not what it appears. It’s actually a mid-engine machine with the engine mounted about 36 inches in front of the rear axle.

The original Corvair design had its powerplant aft of the rear axle. But, we are not talking Corvair power here, rather a 2002 injected LS-1 350cid/350 horse engine, and the engine is kicked up with a 76mm turbo that provides 10-14 pounds of boost. The engine is hooked to a stock 4L60 automatic transmission with a 2.73 posi rear end which has provided a best run of 172 mph at Wilmington. It has yet to run on the sand, which should probably provide a significant increase in speed. The aspect of the spiffy machine that catches your eye is the significant front spoiler which provides needed downforce, as only 42% of the weight is on the front wheels.

By the way, the unique Corvair machine has also drag raced with a best of 126 mph/11.40 second run.

If you think this stock car has a NASCAR look about it, you would be completely correct.

This engine is a modified NASCAR 358 engine that has been modified to produce about 900 horsepower.

This is a former 2003 Busch Grand National car that was owned then by the same owner (Wayne Jessel), who is now running it in land speed racing. During its NASCAR days, it was driven by Casey Mears and Hank Parker Jr.

Jessel explained he started land speed racing in 2005. “It still carries the Busch engine, (Dodge R5 P7 engine), but it has been bored out to 380 cubic inches (from 358) and the compression ratio was raised from 12-1 to 15-1. It also carries a second Holley Dominator carb, a Bryant Crank and Tri-Y Headers which help push the HP to about 900 and 550 pounds of torque. It’s a rocket through the traps with a best time of 229 miles per hour,” Jessel said.

Needless to say, the aerodynamics of the machine which were done in wind tunnels during NASCAR days certainly pay big dividends during this later land speed application.

Another big block Chevy gets the job done with this A/GMS Class ‘54 Vette bodied machine.

The engine displaces 499 cubic inches, explained owner Dan Tackett from Mississippi, who is a retired state trooper. The engine makes 1,000 horsepower on gas. The engine innards include aluminum K-1 rods, a Profile aluminum intake, and a 1250 Dominator carburetor.

Tackett said future plans call for a pair of 1050 Dominators.

The tranny is a vintage Chevy Powerglide, and includes a Gear Bender Overdrive which can be engaged over 3000 RPM. He’s run the car at Bonneville with a top speed of 170, but that was when there was a fuel problem so he’s hoping for better in the future.

This vintage Ford roadster really gets bigtime attention when it hits the track.

Owner Steve Sturim of Grand Rapids, MI, explained that this unique machine carries its vintage look to the engine compartment where there is a tiny Ford Model B powerplant. Originally producing about 50 horsepower, it has been upgraded to about 125 HP.

Additions include a Wico Magneto, a Brierley Cam, and an aluminum flywheel. The engine has also had a .125 inch overbore. But probably most important, it’s been fitted with a Simmons performance cylinder head. Certainly an attention-getting feature is the pair of Weber side draft carbs which are mounted externally, which provide for better air intake. It is fueled by high-test pump gas. The engine is attached to a five-speed Chevy S-10 transmission. The 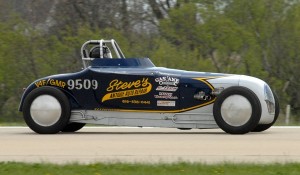 The Model B’s best run was a 113-mile per hour run through the traps.

vintage hauler made 113 mph through the lights with the engine turning at about 6,000 RPM.