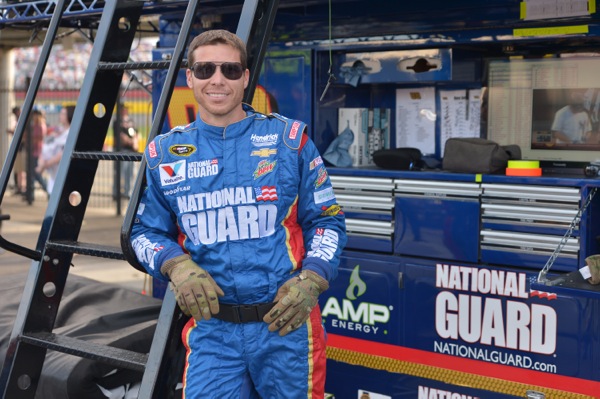 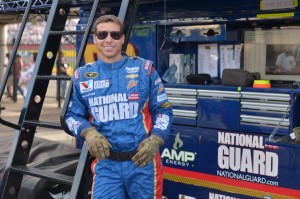 For Joe Slingerland, rear tire changer on the No. 88 Hendrick Motorsports team, the first quarter of the 2014 race season is bookended with special moments.

“It’s hard to put into words,” claimed Slingerland about the season-opening Daytona 500 win.  “It was my first Daytona 500 win and to get it with an Earnhardt made it extra special.  It was an awesome night.”

Equally as important for Slingerland occurred Memorial Day weekend when NASCAR kicked off its annual NASCAR: An American Salute program to honor active and retired service members and military families through July 4th.

The military tributes, for Slingerland, are cherished because of his family.

Slingerland and his younger brother enjoy exchanging tales about their trades.

“It’s pretty cool.  I talk about my brother all the time being the Black Hawk pilot. And, he talks about me with all his military buddies.”

And while there is a significant difference between active military duty and the role of a NASCAR rear tire changer, there are some parallels in the jobs.

“There is a lot of teamwork for both,” said Slingerland. “My brother used to be the crew chief on the Black Hawk before he became a pilot.  He worked with the pilot who had to entrust that he was fixing the helicopter right before each mission.”

“So, there are a lot of things we do on the racecar that correlate to what he does from the teamwork perspective.”

With competition in today’s NASCAR Sprint Cup Series racing so tight, the battle on pit road is critical to racing up front and winning races.

Teamwork is essential, and Slingerland believes the key to the 88 pit crew’s success is years in the making.

“This is my thirteenth season,” said the 35-year-old native of Inverness, FL. “And for most of our guys, it’s their fourth or fifth season.”

Today’s pit stops are so fast that pit crews have to jell pretty quickly.

The No. 88 Team captured the first quarter Mechanix Wear Most Valuable Pit Crew Award due in no small measure to proper training, technique and uniform selection.

“To have the 88 team together for these years and not have many changes is really important.  We all know what each other’s next move is going to be, so it’s seamless on the pit stops.”

Slingerland and the No. 88 over-the-wall crew’s performance so far this season is not going unrecognized.  The team was recently voted among crew chiefs as the first quarter winners of the Mechanix WearMost Valuable Pit Crew Award competition.

“It’s an honor to be voted on by all your peers as the best pit crew on pit road,” said Slingerland. “The gloves we use have come a long way to give us more protection from the heat of the tires during a race.”

In celebration of NASCAR: An American Salute, glove provider Mechanix Wear has outfitted the 88 crew and other teams with a brand new camouflage-pattern glove line called MultiCam®, which maintains the dexterity and ultimate hand protection today’s pit crews have become accustomed to.

Fittingly for Slingerland, he now has a new pair of military-inspired gloves to tell his brother about.

Advertisement
In this article:Hendrick's Motorsports, MASCAR, No. 88