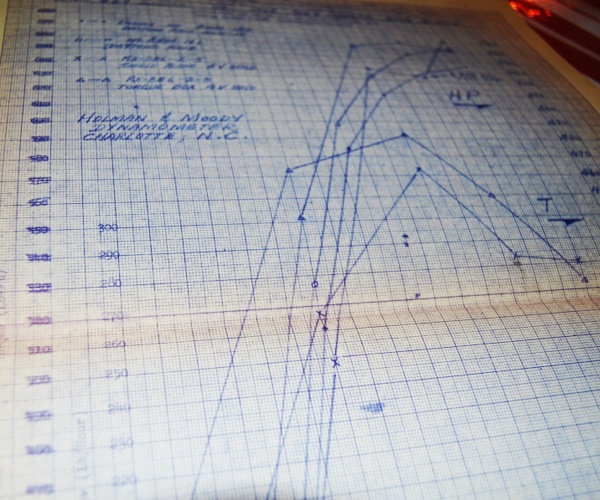 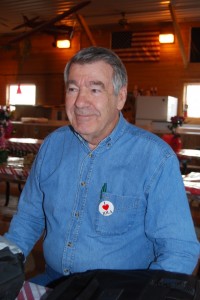 When the Central County Flyers meet for their fly-in lunches on Friday afternoons in the summer, Owen Russell and his friends plunk down $8 for a hearty meal and a shot at weekly bragging rights.

Owen could win the rights hands down week after week if he started telling tales from the six years he spent as an engine doctor in Ford Motor Co.’s mid-1960s “Total Performance” stock car racing program. Owen’s job was to make the NASCAR Boss 429 work better.

The lanky Wisconsinite remembers his 1963-1969 Ford years as a “very good time for someone who was interested in racing.”

He started at the company’s proving ground and moved to the Special Order Dept. In 1968, he worked his way up into the automaker’s NASCAR Racing Program. While there, he was the Power Plant Systems Group Engineer with responsibility for all of the moving and reciprocating parts in the competition version of the Boss 429 V8.

Russell says he worked on only the NASCAR 429 that developed 550-560 hp. A detuned version of this motor was used in the 500 Boss 429 Mustangs Ford built to make the engine race legal. The engines that Owen helped build were used in cars driven by David Pearson, Cale Yarborough, Richard Petty, Bobby Isaac, Bobby Allison and Lee Roy Yarbrough. “Ford never lost a race with that engine,” says Russell, with a real sense of pride in his voice.

Russell reminds one a lot of Shelby, not the Texas drawl, but the tall, blue-jeaned cowboy image. At 15, he knew he wanted to be an engineer. His dream was to design an engine to win the Indy 500. 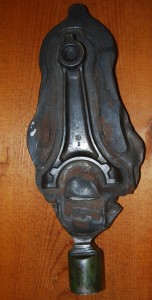 This casting for a Boss 429 connecting rod was never machined.

His first serious engineering job was with Ethyl Corp., between 1955-1963, where he served as a fuels specialist. But during that time, he also spent two years as a Marine Corps Heavy Equipment Officer.

Russell went to Ford after turning down a job offer from Neil Newman at Gorman-Rupp in Mansfield, OH.

Newman later went to Gorman-Rupp where he and Newman became good friends.

However, Russell had to give the Ford thing a try, since he heard that Ford was interested in adding Ferrari to its racing stable.

Between his stints at Ethyl and Ford, Owen built three sports racing cars. His first one, which wore No. 10, was constructed while he was living in Texas. It had a Crosley engine, a Fiat 500 transmission and frame and enough get up and go to start a serious interest in motor sports. Ford’s ”Total Performance” program was in full swing, and Russell wanted to be part of it. He sent a resume and was soon packing his bags. “By 1968, when I got into the NASCAR Racing Program, I had been racing my own sports cars, but Ford had a big, no-holds-barred, unlimited-budget program where not winning was not an option,” he says.

Russell’s work involved developing, creating, manufacturing, inspecting and monitoring the performance of the special connecting rods used in the NASCAR 429.

The special-for-racing rods were made at Ford’s forging plant in Buffalo, NY. Russell still has one of the unmachined forgings, as well as a collection of bits and pieces of pistons, con rods and other parts that broke in races.

Holding up one broken rod, Russell said, “This was an attempt to use a stock con rod in the NASCAR 429.” When the stock rod broke, he had to come up with a fix. “I had to work out a good radius for this piece and we broke a number of rods until we got the best radius. Unfortunately, I don’t have any good ones.” 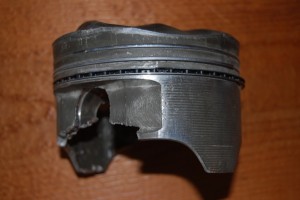 Determining why this piston broke was Owen Russell’s job.

Russell showed me one of the huge pistons from his engine that broke during a race. He had to find why things broke and correct the problem. “This failure was traced to a weakness in the wrist pin,” he said. “The wrist pin was flexing inside the motor and the piston broke. I had to stop the flexing.”

Although it was fun to be involved in Ford’s racing program, it was stressful. “I worked in Detroit, but on Friday night I had to get on an airliner to North Carolina, where I would work on cars at Holman & Moody to ready them for the race. Then, I took a plane to the race. Then, I had to fly to Detroit and be at work Monday morning.” Russell still has power curve graphs for the NASCAR 429 when it was tested on the Holman & Moody dyno in Charlotte in 1968-1969.

Eventually, Russell decided to move to Mansfield to work for Rupp, where he helped set up the company’s engine department.

He remembers that Mid Ohio in nearby Lexington, OH, was always his favorite track to race on. His Lister-English Special was once photographed in the pits there, and appeared in a sports car racing magazine. He also competed at the Waterford Hills course in Michigan. After Ohio, Owen went to Curtiss-Wright to help develop its first rotary engine. 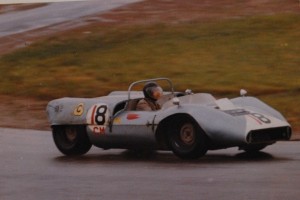 One of the many sports racing cars that Russell built and drove.

Owen built a Lotus 19-based car that raced with numbers 18 and 193. It was a new concept in sports cars and was featured in various racing magazines. The car got to be well known in the Midwest, but racing was starting to lose its appeal for Russell. “I quit racing like an alcoholic quits booze,” Russell said. “I stopped going to tracks, sold my car and cancelled my subscription to Competition Press.”

Russell’s friend Neil Newman had gone to work for Carl Kiekhaefer’s Mercury Marine Co., in Fond du Lac, WI. This opened an opportunity for Russell. Mercury Marine had long been involved in speedboat racing and had competed in NASCAR in the ‘50s. The president of the company flew to an F1 race in Detroit, where he met Russell and offered him a racing job. Ultimately, Russell came to Mercury as Director of Outboard Engineering. He would spend 20 years in Wisconsin working for Mercury Marine and later retired from that company.

In Wisconsin, Russell raced a car wearing No. 83 that was powered by a 3-cylinder Scott outboard motor that he obtained from Newman. Unfortunately, this car was destroyed in a garage fire. After retirement, Russell’s racing days were over, but he wasn’t finished building interesting machines to fly or drive. He put together a Mercury RV0 Rebel amphibious airplane, which he still has today. 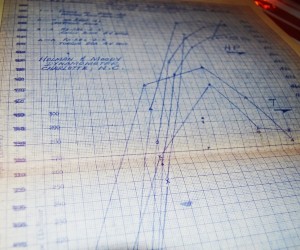 Another of Russell’s retirement projects was a replica of the Ford GT 40 that he built using a Fiero body and a Taurus SHO V6. He made one for himself and one for his brother-in-law. Using his mechanical mindset, Russell discovered that he had to engineer special axle half-shafts for both cars. Another challenge was mating the GM wiring harness to the Ford harness. After the cars were completed, they were sold.

It’s easy to see that over the years, Owen Russell has contributed his technological talents to a number of companies, as well as the field of racing — which we are all thankful for.