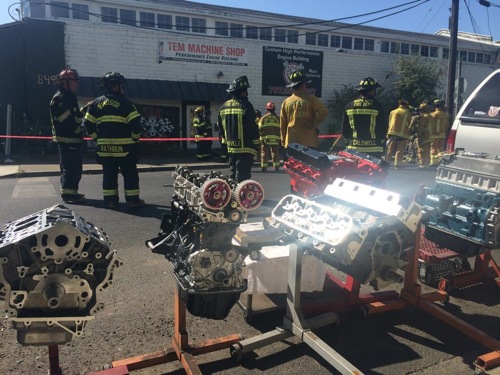 “Now we are in search of a light industrial commercial spot here in Napa. It’s a major challenge – but we won’t give up.” –Rich Oliver

While much of the damage attention from the South Napa Earthquake centered around Napa’s wineries and related business, the racing and performance industry did not escape unscathed.

According to news reports, the 6.0 earthquake in the early morning hours of August 24 caused about 200 injuries, knocked out power to tens of thousands of customers and caused heavy damage to at least 100 buildings.

One of those businesses suffering damage was TEM Performance Machine Shop located in the city of Napa.

TEM Performance Machine Shop, owned by Rich Oliver, was a runner up in the 2013 Performance Engine Builder of the Year award.

According to the TEM’s social media Facebook page, the shop suffered structural damage, but its staff are unhurt.

“As some of you saw on the news there were portions of the shop the collapsed. We are all okay and safe. We removed a lot of completed engines, blueprints, and office stuff before the state officials made us leave. I’ll keep you posted as we get more info,” the TEM Facebook post read.

TEM, which specializes in head porting, flow bench, cylinder head research and development, has been in operation since 1997.

“We are down. But we are not out,” Oliver said, adding that TEM has set up a temporary office at his wife’s Coldwell Banker office nearby.

“They have been extremely supportive of our family over all of the years she has been affiliated with them, so I am able to get some paperwork and such to customers,” Oliver said.

Oliver said following the quake, the building was recognized by city officials to be extremely dangerous. “The city fire marshal barricaded the door for safety reasons about two hours after the earthquake. Since then the building has not only been red tagged, it has been condemned,” he said.

Oliver said at this time, he does not have an official tally on the damage costs. “Thankfully, we do not own the building. However, as commercial tenants with an existing lease, I just don’t have an estimate on the damage right now. But I assume it’s in the multi millions due to the building being a total loss,” he said.

Oliver said TEM continues to focus on its customers. “We have a small operation up and running thanks to our business neighbors and do what we have to do to keep our customers going as much as possible,” he said. “Now we are in search of a light industrial commercial spot here in Napa. It’s a major challenge – but we won’t give up.”

“Unfortunately, the city we live in does not fancy industrial blue-collar shops. Tourist and wine boutiques are more up their alley. If we find a place, I am anticipating we will be back up and running in about two months,” he said.

Not only was the quake’s force disastrous, its timing was, too. “We are in the middle of race season and we were working on 42 long block jobs in the shop, as well as some R & D on several prototype heads,” Oliver explained, adding the shop also had the every day valve jobs for street racers, shops and dealers on their work schedule. “Unfortunately all these will be on hold or returned in various states until we find a new building.”

Oliver, who has been in the rebuilding industry for more than 20 years, will now be in the process of rebuilding his business. “Just know that we are not out of the game. We will be back even stronger, he said, adding the best place for updates it to follow TEM on Facebook. “That’s the easiest way we have found to keep everyone up to speed.”

Oliver said he also would like to thank the hundreds of people that stepped forward to help him and his family with food, shelter and other needs. “We had 40-plus people show up in a 45-minute notice with trailers, hand trucks and boxes,” he said. “These racers and customer did some amazing amount of work in a time their families were scared and needed these dads and husbands at home. I can’t even express my gratitude in words.”

And while no one can forecast an earthquake, Oliver cast out a positive prediction of his own. “I will tell you, we are going to have one BIG re-opening party at the new location,” he said.

No Crack at the Track
The quake also reportedly “shook up” some of the Verizon IndyCar Series drivers in the area for the GoPro Grand Prix of Sonoma. Some drivers reported to the media they were woke by the earthquakes’ rumblings, as well as emergency sirens and alarms.

According to IndyCar officials, no damage was reported Sunday morning at the racetrack – about 15 miles from American Canyon epicenter – or its main arteries, California Highways 37 and 121.

According to a track spokesman the 2.385-mile, 12-turn road course and buildings at the facility were inspected and appeared to be fine.

The spokesman also reported that no fans or campers were injured during the quake or its aftershocks.

The IndyCar Series race took place at 1:40 p.m. PT as scheduled and was won by Scott Dixon in his Target Chip Ganassi Racing Chevrolet. For race results from Sunday’s event, click here.