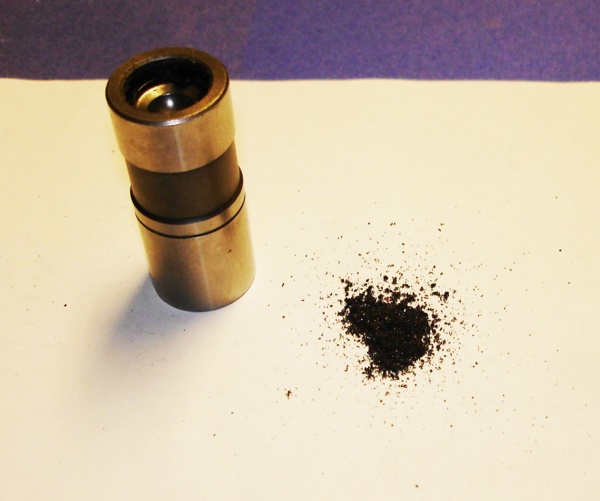 Flat tappet cams, with either solid or hydraulic lifters, are commonly used in many street and performance engines. It’s a simple design that works well, provided there’s adequate lubrication between the lifters and cam lobes to prevent wear that can wipe out a cam and/or lifters.

The problem is today’s motor oils contain much less ZDDP anti-wear additive than in years past. Most oils contain less than 800 parts per million (ppm) of ZDDP to comply with emission requirements, because ZDDP that finds its way into the exhaust can shorten the life of catalytic converters and O2 sensors.

Reducing ZDDP in motor oil does not create a wear problem for engines with roller cams or overhead cams because there is much less friction between the cam and lifters or valve followers than in a flat tappet engine. Oil companies say today’s low ZDDP motor oils also provide adequate protection in older engines with flat tappet cams – provided the engine has stock valve springs. But the lower ZDDP levels have often proven to be woefully inadequate in engines with flat tappet performance cams and stiffer valve springs.

One way to address this issue is to use a ZDDP crankcase additive to add extra anti-wear protection to the oil, or to use a diesel oil, street performance oil or racing oil that contains 1500 ppm or more of ZDDP.

The risk of flat tappet cam and lifter failure can also be minimized by using lifters that are made of high quality materials. The metallurgy in some low cost imported lifters won’t hold up over time.

Equally important is the crown finish on the bottoms of the lifters. The bottom of a flat tappet lifter isn’t perfectly flat. It has a slight crown that is .0015 to .0025 inches higher in the center than around the edges. The crown helps the lifter rotate as it rides on the cam lobe (which has a slight taper to one side).

On high revving engines with extremely stiff valve springs, a slightly lower crown (.0007 to .0012 inches) may be recommended. The bottom of the lifter also needs to be relatively smooth (but not polished) because a small amount of texture helps the oil spread across the surface. Hand polishing the bottom of lifters can often ruin the proper contour of the crown. 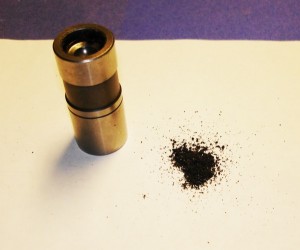 This pile of debris is what was found inside a brand new set of EDM lifters that were never disassembled or cleaned after the oil holes were burned in the bottoms of the lifters.

Another way to assure good lubrication between a flat tappet lifter and cam lobe is to create a small hole in the bottom center of the lifter. This allows oil inside the lifter to dribble through the hole to maintain a thin film of oil between the moving parts.

The size of the oil typically ranges from .015 to .026 inches in diameter, and is created by using an electric discharge machine (EDM) to burn the hole through the lifter.

When done right, EDM lifters can provide an extra measure of protection in demanding applications. But if done incorrectly, they can cause problems down the road.

The quick and dirty way to make an EDM lifter (which is the WRONG way) is to take an assembled lifter out of the box, burn the hole through the bottom of the lifter, buff it up a bit and stick it back in the box without disassembling or cleaning it.

The debris from the EDM hole burning process remains inside the lifter, which means the debris can migrate out of the lifter when the lifter is installed in the engine. The debris may travel up the pushrods and damage the rocker arms, it can exit the lifter and damage the cam lobes or bearings, or it may even plug up the oil hole itself negating the function of the hole that was created to improve lubrication.

One lifter supplier showed us the considerable amount of debris that came out of a set of EDM lifters that were made the wrong way. Engine builders who are buying and installing these improperly made EDM lifters have no way of knowing the lifters contain debris inside.

So, if you are not buying EDM lifters from a supplier who is making them the right way, you’d better disassemble, inspect and clean every lifter before you install them.

Finally, it goes without saying to always use a high pressure assembly lube on the cam lobes and lifters when building the engine. Assembly lube will stick to the parts much better than oil, and provide protection during the critical break-in time.

Advertisement
In this article:Flat Tappet Cam