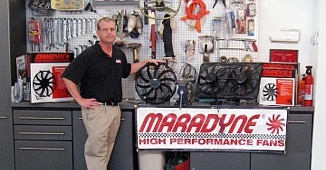 CJ Clayton, national sales manager for Maradyne High Performance Fans, has over 25 years of automotive industry experience and a passion for performance, from dragsters and hot rods to off-road vehicles. An electric fan and engine cooling expert, he has outlined some points to consider about the benefits and selection of an electric cooling fan.

Electric cooling fans can deliver a number of important benefits to a wide range of vehicles and driving situations. Optimizing the air movement across the fins of the radiator is essential to prevent overheating, a task that electric fans can often handle better than engine-driven fans.

If your vehicle was always in constant motion, you probably wouldn’t even need a fan. Moving down the road would create enough ambient air flow and would be enough to cool down the car’s coolant. However, when your car stops at lights and occasionally gets stuck in traffic, the air flow assist that cooling fans provide becomes a necessity.

A key advantage of electric fans is increased engine cooling and improved air conditioning cooling at idle, when it is most needed. In addition, replacing an engine-driven fan can increase horsepower and improve fuel economy as the engine drag from turning the fan is eliminated. Electric cooling fans operate like any other electrically-powered accessory on the car. Its source of energy is the electrical system of the vehicle as supplied through the battery in conjunction with the alternator.

The engineers at Maradyne High Performance Fans have been perfecting the science of electric fan cooling technology for over ten years. The company’s flagship fan can be found on the cars of several Nationwide and Cup Series teams, a demanding application where cooling is critical to winning performance. Maradyne fans offer a proven way to keep daily drivers, street rods, muscle cars and off-road vehicles cool.

What is the best fan choice for my vehicle? Enthusiasts who are redoing anything from a 1964 Comet to a 2006 Blazer contact Clayton for assistance in choosing the correct fan for their latest project. According to Clayton, “People often have already reached a conclusion based on a year/make/model lookup, and they want me to verify that they are on the right track. However, I have to tell them that it is virtually impossible for a year/make/model lookup to correctly factor in all of the variables that go into choosing the best fan for their application.”

The first thing to consider is how the body style of the vehicle affects air flow. For example, the wide design of a 1940 Buick is going to have more natural air flow than the narrow profile of a C3 Corvette.

Secondly, the core dimensions of the radiator (just the core measurement excluding the cooling tanks) lets us know if a single fan is needed, or if a dual fan shrouded unit could be considered, because fans must cover as much of the radiator as possible.

An important deciding factor in fan selection is the amount of air flow needed. Is the vehicle for racing (high performance application) or is it a “mild weekend cruiser”? Maradyne recommends matching the CFM (cubic feet per minute) of the fan to the performance level of the vehicle.

With a mild street motor, not as much heat is created, requiring lower CFM levels. Higher performance engines require more CFM to keep things cool.  But Clayton notes that “We have a saying here at Maradyne that “there is no such thing as too much CFM” – nobody ever complains about a radiator being too cool. The goal is to choose the correct fan to match each unique situation, but too much CFM is better than not enough.”

What about electric current demands? Take a look at the charging system’s specs to make sure the battery and alternator can handle the amp draw of an electric fan. 12 to 16 inch fans can range from 15 to 19 amps.  Some dual fan configurations can draw 22 to 35 amps.

How to choose between a pusher or puller fan? This all depends on the application, space and if you want to remove the engine-driven fan.  For most installations, Maradyne recommends a puller fan, which would be used on the backside of the radiator in the engine compartment to pull cool air through the radiator. Whenever possible, it is advised to always try to use the fan in a puller configuration to not obstruct the natural air/ram air the radiator will see from the grill opening. A pusher fan would be used on the front side of the radiator between the grill and radiator. Maradyne fans are reversible and ship as pullers.

Depending on the application, there can be a choice between a shrouded or non-shrouded fan. A shroud around the fan does improve cooling because it creates more focused airflow, and for that reason, if the application allows it, Maradyne recommends the use of a shroud.