In an era where even the once mighty V configuration seems to be giving way to the next generation of in-line fuel savers, many are wondering what this spells for the boxer engine. Going by many names, such as opposed, boxer, and flat, the engine configuration famous to such cars as the Porsche 911 has had a storied run throughout the decades. 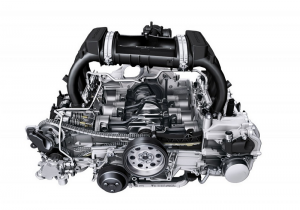 In an era where even the once mighty V configuration seems to be giving way to the next generation of in-line fuel savers, many are wondering what this spells for the boxer engine. Going by many names, such as opposed, boxer, and flat, the engine configuration famous to such cars as the Porsche 911 has had a storied run throughout the decades.

The hallmark of the opposed engine is the fact that the engine has two cylinder banks and each piston, directly horizontally opposed from another cylinder, does not share a crank pin with the opposing piston. The latter characteristic is essential to the engine being considered opposed; often times people confuse the boxer engine with the 180 degree V engine family, which is similar, yet attaches both pistons to the same crank pin.

Gaining the name ‘boxer’ from the appearance of two boxers going at each other from the synchronously reciprocating motions of the pistons, the opposed engine was first patented in 1896 by Karl Benz. Almost as old as the automobile itself, the opposed engine design has certainly had its run throughout the decades. Perhaps one of the earliest and most prolific uses was on the VW air cooled flat four, which became the staple of the Volkswagen Type 1(Beetle) and remained in production for almost 70 years before being discontinued; however, its appearance in road cars went on the wane much earlier, beginning in the mid 90s. Porsche has also been reputed for using flat engines, particularly on the 911 and succeeding model variants. For a time, some of the most prolific boxer engines were also air cooled, though this is no longer the case; Porsche shipped the last air cooled 911(badged as the 993) in 1998, and the air cooled Beetle ceased with the introduction of the New Beetle in 1997. Beyond Porsche, Subaru has also made extensive use of boxer engines, with the Impreza being a well known example. Ferrari experimented with the flat engine design in the 1980s, with the most prolific example being the Ferrari Testarossa, which sported a flat twelve.

Boxer engines derive several performance advantages inherent to their design, since the center of gravity on an opposed engine is much lower to the ground compared to an in-line or V design. This allows for better lateral acceleration. In addition, the benefits to handling are enormous. Better turning/cornering capability, decreased roll, and better grip of the roadway all come natural to the flat engine over its alternatives, due to its lower profile. The boxer engine also has a leg up in terms of balance; due to the fact that its pistons are directly opposed to each other, firing motions can cancel entirely. Consequently, the flat four is ideally balanced over the in-line four, due to the fact that second order vibrations can cancel; the in-line four is seen as imbalanced, hence the need for balancers and dampening mounts. Boxer engines also generally have better cooling system functionality after start-up, since, due to the horizontal nature of its profile, oil and coolant remains more evenly dispersed throughout, rather than sinking down as happens in in-line or V designs. Lower profile also makes power transmission more even, as the engine is on a plane closer to the rest of the drive-train. 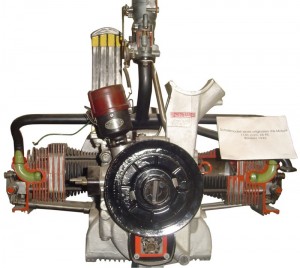 Despite all of the opposed engine’s benefits in terms of performance, however, it does have a few marked disadvantages which have largely precluded its rise over the decades. The flat configuration always catches flak for the fact that the wide profile makes the engine significantly harder to work on. With each cylinder head right up against the side of the engine bay, a simple task like swapping out spark plugs can become a protracted and arduous process. In addition to irking those who wrench on these cars, it also increases maintenance cost for the average owner when it does come time to have the car in the shop. But the added costs of a boxer engine don’t stop there. They generally require more parts and components, due to the fact that having two cylinder heads is innate to the flat design. This, in many cases, doubles the number of head components, valve-train components, and cooling jackets. The added cost builds up, making the boxer engine much more expensive to produce. Obviously weight considerations come into play here, though they don’t present a huge obstacle. Many boxer engines are constrained to mid engine designs, due to the additional size requirements imparted by its wide profile; this is not always the case, with smaller boxers generally exempt.

Some folks will tell you that the boxer engine is the best thing to ever happen to motoring, while others will contend it isn’t worth spitting on- just depends who you ask. Regardless of which of these two groups is right, one can’t help but notice that the engine has always been more of a niche technology. Where does this leave the engine’s fate in today’s automotive world, where things are changing so rapidly? Probably not anywhere different than it’s always been. Sure, no new manufacturers are adopting the configuration, but those who currently make them remain committed to the design. Subaru recently unveiled a new line of smaller, more fuel efficient boxers, designed to meet the challenge of a world where fuel economy and efficiency mean everything to so many. Porsche also isn’t abandoning its flat six tradition. In fact, the German manufacturer recently announced that it was investing in a brand new line of flat engines, including both four and six cylinder mills. The folks in Stuttgart are even rumored to be working on a flat eight to grace one of their upcoming models. And of course, BMW remains committed to its line of opposed engines employed in its motorcycles. Expect the flat engine to soldier on, much like it has for decades. It might not be the next big thing anytime soon, but it’ll be around.