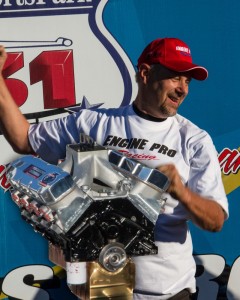 A Michigan racer won a new race engine for the second time in as many years at the 10th Annual Funny Car Nationals presented by Discount Tire held recently in Martin, MI. Rick Morley of Allendale won this year’s prize as he did in 2012 at US 131 Motorsports Park. It was the seventh year running the Engine Pro Engine Giveaway presented by Pro-Filer and is an event that bracket racers anticipate all year.

With 20 eligible racers, only one racer would walk away with the engine assembled by Performance Engineering and valued at more than $15,000. This year, it again was Morley.

Sponsors on hand to present the prize were Scott Overlund and Tom Stuyvesant of Engine Pro, Don Kraii of Performance Engineering, Sue Rynberg of Mahle Aftermarket, CeCe DeMond of Hastings Manufacturing and Tim Foster from Melling Engine Parts. Special thanks to Pro-Filer for providing the CNC heads and manifold. Other sponsors who made this possible were ARP,Oliver, Ferrea, Comp Cams, JE Pistons, Clevite, Fel-Pro and Milodon.