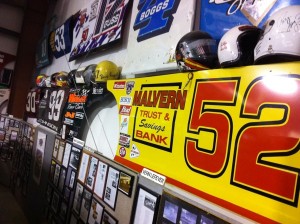 Along the rolling hills of northwestern Kentucky, the landscape is dotted with horse farms and stables. In this gentle countryside, prized thoroughbreds and quarter horses roam the lush, grassy farmlands.

And within this part of the state where miles of wooden fences rise on each side of the roadway, not too far from the town of Florence on US HWY 42, there breeds a different kind of horsepower – one that roars from a Late Model racer.

Nestled next to King’s Florence Speedway in Walton, a half-mile, clay, oval track carved into the top of a hill, sits the Dirt Late Model Hall of Fame – a 2,500-sq. ft. building that seems to be bursting at the seams with racing late model history and memorabilia.

Everything from helmets, clothing and trophies of racing legends to parts and complete vehicles themselves, pack this pole building. Photos, event posters and newspaper clippings line the maze of walls throughout the Hall of Fame, remembering racing legends such as Larry Moore, Dick Potts, Red Farmer and others.

Built from donations in 2001 on the grounds next to the dirt track, which came to life more than 50 years earlier, the Dirt Late Model Hall of Fame is a labor of love for executive director Bill Holder and its curator, Jim Klette, and other volunteers.

I stopped by the HOF for a visit in September on my way to the PERA convention in Louisville, and was taken back by the amount of time, energy and love for the sport of racing that was poured into the facility.

“We’re a 501C3, non-profit organization. There is no money involved in this. It is strictly volunteer,” Holder said, as he took me around the room crammed with donated late model racer items.

Fortunately for race fans, this place exists. Unfortunately for up-and-coming drivers, it’s running out of room. Just outside the building on a cement floor, sits a number of donated racecars under a makeshift canvas tent roof and sides.

Holder and Klette are looking to raise donations to build an addition to the structure in an effort to better house the outdoor cars, and give more room for the museum artifacts that have been added as racing treasures since the early 2000s

Holder, an auto racing journalist who has penned numerous articles for various magazines, including Engine Builder, said one dirt track this year held a 50/50 raffle with its race fans and the money raised was donated to the museum.

“I’d like to see more of the dirt tracks hold a 50/50 raffle during the season – then we could easily raise the money for the upgrade,” Holder said.

If you are a dirt stock car fan and are in the area of the HOF, I urge you to stop by and check it out.

You, too, will see that this race fan museum, designed to preserve racing history, is itself, worth preserving. n

For more information on the HOF, visit http://ndlmhof.wordpress.com.

To contact Holder on donations to the museum, email [email protected]