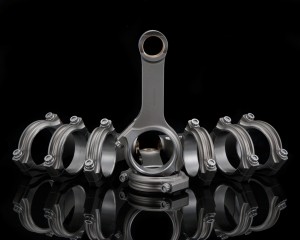 Despite having similar appearances, a diesel crankshaft has some primary differences from its gasoline counterparts. A gasoline engine uses a spark to ignite the fuel. A diesel engine, operating at a much higher compression ratio, uses the heat produced by compression to ignite the fuel. Diesel engines typically have a longer stroke than the bore diameter, so to handle this load, diesel crankshafts are much larger physically.

Diesel crankshafts can be found in a variety of materials. From strongest to (relatively speaking) weakest, you’ll find billet steel, steel forgings, cast steel, nodular iron, malleable steel and (in some cases) cast iron. Heavy-duty diesel cranks have hardened bearing surfaces (case hardened) with the most common form of hardening being the induction process, according to industry experts.

Induction surface hardening is a well-known and widely used process in the global diesel engine manufacturing industry. It was originally used primarily to harden bearing journals,­improving their wear resistance, but it is also recognized as a viable technology for improving the fatigue resistance of highly-stressed diesel crankshafts.

Induction hardening and induction tempering are rapidly becoming the processes of choice for manufacturing crankshafts for diesel engines of all sizes. In addition to the physical requirements of dealing with diesel crankshafts, industry experts caution that availability of replacement bearings will have a direct impact on whether you should – or can – service these behemoths.

Unlike bearings in the automotive aftermarket, diesel ­bearings may not be available in convenient oversizes so it’s a good idea with out-of-the ordinary shafts not to grind them until you have the bearings in hand.

But whether you repair or replace a crank ultimately comes down to how badly it was damaged. If it was broken, more than likely replacement is your only option (but remember that in most cases, a broken crankshaft is the result of some other issue).

Breakdown on the Diesel Market

And, while there are differences between the diesel and gasoline material components, there even tends to be two sides of the mid-size diesel spectrum: on one side there is street performance and on the other there is all-out diesel race parts.

Street performance diesels deal mainly with engine parts that are primarily for bolt-on applications and can make great power gains without sacrificing the integrity of the vehicle as a daily driver.

All-out racing diesel engine builders typically get more involved in custom made internal engine components in order to withstand the stress from the huge amount of torque they produce. In a typical mid-size diesel engine, for example, replacement parts such as pistons are pretty easily obtainable. But this is not the case with diesel cranks and rods, for the most part.

As for all-out performance, whether for drag racing or tractor pulling, the aftermarket has stepped up. There are several crankshaft manufacturers that offer custom crankshafts for Power Stroke, Duramax and Cummins engines. Due to the high torque loads and cylinder pressures these engines can generate, a lot of engineering and work goes into making a custom crankshaft for these applications.

A stock diesel crankshaft is typically forged, a process in which a chunk of steel, usually made of 4340 or 1020 alloy, is heated to a certain temperature and pounded into shape with a forging die. This is why forged cranks have such wide parting lines due to the material that oozes out during the process.

Forging offers strength compared to casting. A “cast” component, on the other hand, is made when the material is melted and poured into a mold. But it could leave areas where the material is thicker or thinner and is prone to stress cracks.

A custom crankshaft for diesel engines is made from a solid chunk of  billet steel that is literally carved into shape. The steel is usually 4340 alloy, which is the most common for crankshafts due to the fact that it offers high tensile strength (the maximum stress that a material can withstand before failing). Also, 4340 responds well to heat-treating, which is performed after machining and increases the tensile strength further. During the heat treatment process the crankshaft is subject to extreme heat in order to control the behavior of the material often referred to as its “grain.” This process offers core hardness, and the crankshaft is hardened all the way through, increasing the stiffness of the material.

Some crankshafts are “nitrided,” a process during which nitrogen is diffused into the surface of the metal to create case-hardening. This is used to increase bearing life and durability.

What are some things you need to consider when purchasing a diesel crankshaft?

First, what do you want it to weigh? The rule of thumb is if you wish to lighten the crank, you can safely reduce the weight by 5 percent, but no more than 10 percent. The more you lighten the crankshaft, the less durable it will be. But a lighter crankshaft has less rotating mass, so the engine will rev up quicker. But lighter cranks also have less inertia and will drop revs fast as well.

The counterweights of the crankshaft are also something to consider.

Some shops do what is known as knife-edging. This is where the counterweights of the crankshaft are machined to look like a knife blade rather than just being square cut from the factory.

The theory behind this is to help the crankshaft “cut” through the oil as the counterweight rotates in the oil pan.

Custom crankshafts are also offered with what is known as micropolishing. This is performed usually two different ways.

One is with chemical etching and the other is with some sort of media. When finished, the entire crankshaft literally looks like a mirror.

The primary reason for this process is to allow the crankshaft to shed oil. This, in turn, creates less aeration of the oil and helps lower oil temperature.

Powered metal was fine for stock applications, but as simple bolt-ons were added to increase performance, these parts began to fail. This is something to consider when looking for power gains out of newer diesel engines.

Connecting rods in a diesel engine can see a lot of stress because of the higher compression ratios. Just as with crankshafts, aftermarket companies have answered the call for producing performance connecting rods.

Most aftermarket stock replacement rods are made of forged material such as 4340 with an addition of chrome, nickel, moly and vanadium. This improves grain flow, strength and durability.

When purchasing a set of aftermarket forged rods, manufacturers often offer reconditioning services when engines are in need of freshening.

Forged aftermarket rods are tough and can take some serious abuse. Connecting rods of this caliber should offer a lifetime of use and can be reconditioned at a fraction of the cost.

These billet rods are offered in an “H” or “I” beam design with a choice of a straight cap or slanted cap and your choice of fasteners. Slant cap designs are often used for cam clearance or small bore ­applications.

Most custom billet rods are fitted with bushings on the small end for the wrist pins but can be machined for press-fit wrist pins if the they are coated with diamond-like coating.

Clearances may need to be increased depending on application. For some diesel applications, aluminum connecting rods are also being manufactured and used with great success.

Whether you’re in need of a custom crankshaft or connecting rod, or just want to upgrade your existing package, aftermarket manufacturers are tailoring their products for your needs.

And many aftermarket manufacturers are using quality materials made here in the USA, machined to exact tolerances and specifications to meet the demands of your performance diesel package.

For a complete list of diesel crankshaft and rod suppliers, visit our online buyers guide at www.EngineBuilderMag.com/BuyersGuide.