This year an opportunity came to go to a gathering of speed freaks drawn together from around the world. An event that I’ve now learned is on most “Motorhead’s” bucket lists, and was put forth as the background for a great movie that hit limited screens in 2005 and is recorded on DVD in many of our video libraries. The movie was “The World’s Fastest Indian,” and the event is simply called “Bonneville.” 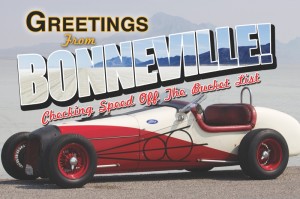 Most of us in the automotive aftermarket have been bitten by the “racing bug” from time to time.

Whether it’s as a racer or a ­spectator, I think most of us have participated to some extent. And we should.

Racing is the sexy and exciting expression of the automotive industry. It represents a large portion of the parts sold and labor performed. And if we’re lucky, we’ve experienced multiple forms of racing.

On the Job Performance

I deal with some form of racing engines every day, day-in and day-out. Be it drag racing, road racing or dirt circle track, machine shops are building and maintaining race engines of all forms and manufacture, and engine parts guys are finding and supplying parts to help them complete the jobs.

Although I’ve never been a participant of any form of “sanctioned” auto racing, I’ve enjoyed going as a spectator or even as part of a crew since I was 12.

But this year was supposed to be something special. This year an opportunity came to go to a gathering of speed freaks drawn together from around the world. An event that I’ve now learned is on most “Motorhead’s” bucket lists, and was put forth as the background for a great movie that hit limited screens in 2005 and is recorded on DVD in many of our video libraries. The movie was “The World’s Fastest Indian,” and the event is simply called “Bonneville.” 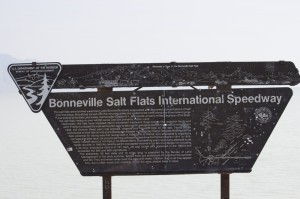 A century later, 2014 was to be a very special Speed Week as it is the 100th anniversary year. This year there was also news that Danny Thompson, son of the famous racer, builder and entrepreneur Mickey Thompson had brought Challenger II out of retirement, repowered her and had his eyes set on a 500 MPH target. This would be a first and a major jump on the current record for a wheel-driven car.

My story starts out with an email from a good friend in California. I grew up in California and this is also where all of my non-sanctioned racing took place. It’s also where I went to school and where, in 1972, I took my first auto shop class.

George Lucas once asked, “Where were you in ’72?” Well I was growing up and twisting wrenches in Cupertino, CA. This is also the current home of a then non-conceived Apple Computer and just another small city in Northern California, not all that far from Lucas’s Modesto.

Lucas Pictures had not yet released “American Graffiti,” but my friends and I were living our own version in our school and on those streets of California. And now two of those friends and our instructor from the aforementioned auto shop were planning a trip to the salt this upcoming summer and they needed a fourth member to round things out. So, what else could I do but email back in the affirmative. It seems that over the past few years we’d all seen “The World’s Fastest Indian.” And somehow we all had similar bucket lists. 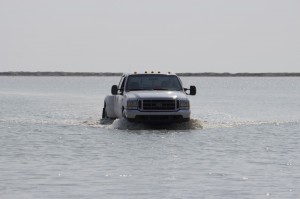 While the trip seemed so far off at first, it was upon me in no time.

Still I had time to research, and if you’re interested you can start with the SCTA website, www.scta-bni.org.

The web is full of info, pictures and videos, but I’ll warn you now, you too will have a bucket list. And yes, I did watch the movie again, for about the 20th time.

I arrived in California Wednesday night. Thursday morning, the guys and I met up just off Hwy 80 at the foot of the Sierra’s. Once we were loaded, we were on our way.

It had been some time for me, but I learned my friends and our instructor had been socializing since we graduated back in ’74. I had seen him a few times since then, but it still seemed like a 40-year anniversary to me.

Our trip was pretty uneventful and the motor home pulled the hill and got us over Donner Pass without incident, unless of course you call being passed by the Oscar Mayer Wienermobile an incident.

It did produce several related jokes and speculation on just what kind of record it might qualify for. After a stop for lunch and a trip to the grocery store we had food and spirits for the long weekend and the balance of the day was spent motoring into Wells, NV. 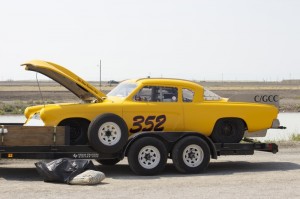 We were up early and on our way to the Salt Flats Friday morning. It took about an hour to get from the RV park to our off ramp. And this is when things started to change.

This is where we started to see cars, all kinds of hot rods mostly, but also several trailers and car haulers. We followed the road north until we came to the famous “Bend in the Road.” We were greeted by a ranger who crushed our hopes of seeing 400-500 mph cars speeding down the salt. We were told we could continue to the end of the causeway, but would have to turn around before we could go out on to the salt.

And indeed we did. It does rain here throughout the year and it’s the rain that prep’s the salt so perfectly for the speed runs. It had rained just a day or so before we arrived. It seemed this rain had not evaporated at all and what we found looked like a lake that stretched out over the flats for hundreds of square miles. Hopes were high that enough water would evaporate from some of the tracks, which are actually on a higher ground than where we stood, but to me it didn’t look good. Watching the trucks driving back in from the starting line and pit area was very depressing. It gave evidence to just how deep the water was as they plowed through with water cascading from their bumpers. 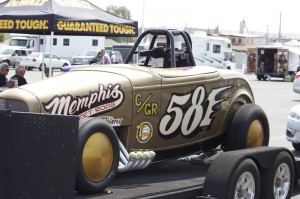 This story was supposed to be about what it’s like to see a car speed by at hundreds of miles an hour. About the excitement of a race event that is almost totally open to the spectators. Granted, you can’t be out on the race course itself, but the pit area and even right up to the starting line is totally accessible.

The stories of the friendliness and openness of the competitors sounds nothing like any other racing event. And we found this to be true when we made our way back to the town of Wendover. The parking lots of the hotels and casinos of Wendover quickly began to fill up with car trailers and haulers.

At this point most were thinking this would be a day or two delay as the track dried. Cars were rolled out and hauler doors opened. We found friends and their car and crew in the lower parking lot of the Nugget, and this soon became camp. It was suggested that the air museum a few blocks down had some interesting displays and we might burn up some time while more cars pull in.

If you ever get the chance to pursue your new bucket list entry, you will want to visit Wendover and the museum. It’s not large, but is a great piece of history from WWII. This was also one of the most interesting parts of our quest for speed. The museum is a large airbase and someday, when the funds are available, this will be a great destination to visit, on its own.

Today, there is only one building of displays, but we were told there’s another building that had a little to see, but we failed to get good directions. In our search, we discovered several cars parked outside a hanger a little ways down from the main building. And it had an open door.

Upon poking my head in the door, I was very surprised to find a bodiless streamliner and a flurry of activity going on. When we asked if we might look around we were greeted by a group of very friendly and informative students from Ohio State University. Their car, The Venturi Buckeye Bullet III (VBB3) was probably the most fascinating vehicle seen on this trip. The Buckeye Bullet is the name of a series of student-built, alternative-fuel racecars created by Ohio State University students. Their first electric car effort went 307 MPH in 2010.

This car, the VBB3, is powered by lithium ion batteries supplying 2 mega-watts of power (enough to power 2000 homes), has a total output of 3000 horsepower, weighs about 3-1/2 tons and has a drag coefficient of only 0.13. The student engineers believe this should be good for over 430 MPH. It has two custom-built transaxles with an extra output shaft to attach brakes from a 747 airliner. 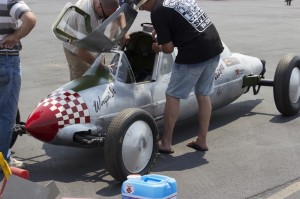 Just as impressive as the car, were the students who built her. They gave us over an hour of their time and interrupted their luncheon to give us a very detailed introduction to what may very well be the future. And we all agreed, these guys are certainly writing their own ticket to a very exciting future for themselves and the automotive industry. You can check them out at:

The balance of our day was spent investigating the cars and motorcycles in the parking lots around Wendover and with the annual hot rod show out front at the Nugget.

That night while we enjoyed the local collection of hot rods and classic cars, it started to rain. At that point we all knew what tomorrow would bring. Saturday morning the SCTA posted on their website that the event had been cancelled due to the accumulation of water on the track.

Needless to say, I was very disappointed to have traveled all this way and to hear this news. Now I know I’m not the first guy to have his race day rained out. This happens in racing all the time.

I guess I am lucky in that even without the timed speed trials, I still was able to experience some of the cars and people that make this such a wondrous event.

I will get back to Bonneville, and I hope I can share stories of speed, feats of engineering and interesting characters. 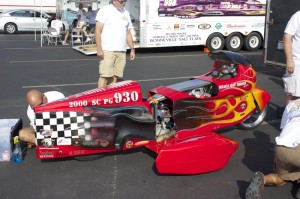 Today, I hope you’ll start your bucket list, or add to it a visit to at least one, and maybe all of our great racing events.

If not Bonneville, maybe Daytona or Indy would be of more interest to you. I’d like to see the Monte Carlo Grand Prix someday. The engineering in a vehicle from any of these events would capture me for hours.

And with any luck, I’d find someone willing to talk and reveal some of the inner workings and secrets of success in that form of racing.

Because this is where it happens, on the racetracks across America and around the world. A drive to be quicker, better and faster leads to engineering and invention that one day makes it’s own way into the more grass roots forms of racing or even into production vehicles, then into our lives.

And don’t forget to take a kid to a race or car show. We need the interest of the next generation. And if they’re anything like what I saw come out of Ohio, the future could be very exciting.

I hope to see you on the salt soon.

Diesel of the Week December 2020 Recap
Connect with us