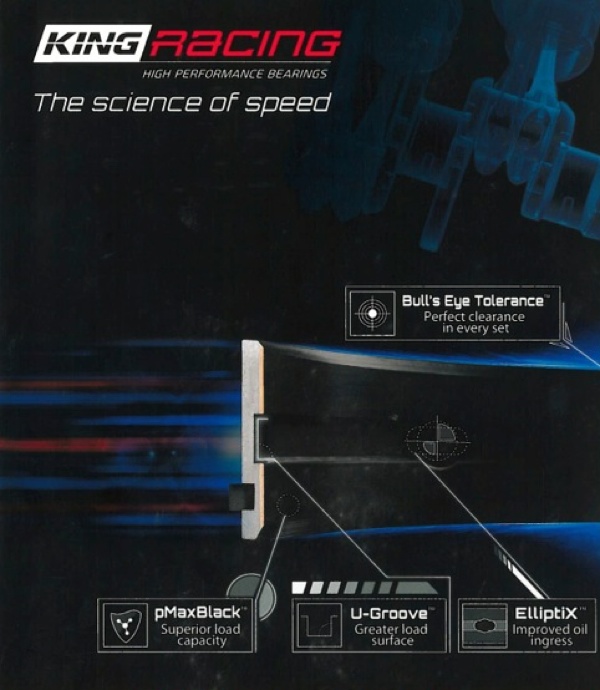 Jay Dickens’ history with engines dates back to his first engine build at the age of twelve. Having found a passion for engine building, he spent many years working with various engine builders refining his craft. In 1994, Jay founded Jay Dickens Racing Engines (JDRE) where he has dedicated himself to building winning race engines that have earned numerous championship titles.

Magnus Ohlaker was the driving force behind dozens of race wins across multiple race series while working for Cosworth. With Time Attack, Indy Car and Champ Car winning engines to his name, he was also responsible for the majority of the Cosworth’s Subaru crate engines that were offered in the US.

“Over the last decade we have seen significant advances in engine technology and oil formulations to improve fuel economy and engine life, but limits the ability to extract maximum performance.” said Jay Dickens, founder JDRE. “King has developed new bearing materials and designs that can help engine builders overcome these limitations and get the most out of today’s engine technologies.”

King will introduce its technologically advanced line of race bearings at the 2014 PRI Show. Incorporating unique geometric features and an innovative metal structure, the new King XP Racing line of engine bearings is a breakthrough not seen before in the racing industry.

Attendees who stop by King’s PRI booth #601 will have the chance to perform the pMax Black overlay scratch test with the opportunity to instantly win a prize, including a Profilometer worth over $2500.

For priority seating at the King Racing seminar, contact Diana Walters at 973-857-0705 or e-mail [email protected].