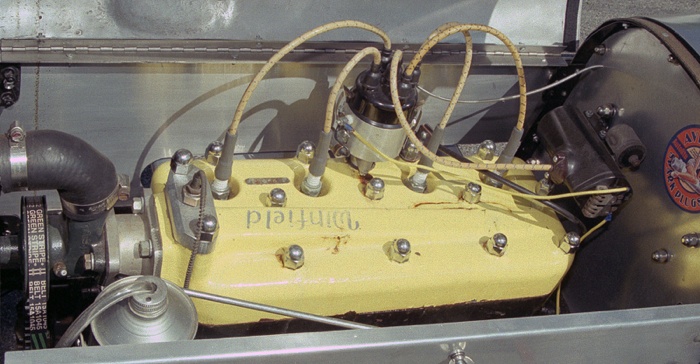 It was known as the Model B engine and was produced for only four years beginning in 1932. Sporting only four cylinders, it was basically an upgrade of the earlier Model A powerplant. The “B” engine sported an impressive 200 cubic inches of displacement. Its compression ratio was a super-low 4.9-1. The paltry 50 horses it produced came at about 2,200 RPMs. The engine certainly didn’t appear likely to be a candidate for upgrading, but that wouldn’t be the case. 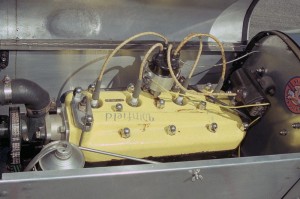 In addition to its carburetors, Winfield also produced a B Block compatible head, shown here.

It was known as the Model B engine and was produced for only four years beginning in 1932, hence the ‘Deuce’ for that number in its model year.

Sporting only four cylinders, it was basically an upgrade of the earlier Model A powerplant.

The “B” engine sported an impressive 200 cubic inches of displacement. Its compression ratio was a super-low 4.9-1.

The paltry 50 horses it produced came at about 2,200 RPMs. Its main components included an ignition system, which included a coil and a centrifugal distributor.

The engine certainly didn’t appear likely to be a candidate for upgrading, but that wouldn’t be the case.

Shortly after its introduction, there was a wave of professional upgrades that evolved making every stock Deuce a potential race engine.

And, single-car garage engine builders would find many different ways of devising methods to triple, and sometimes more, its 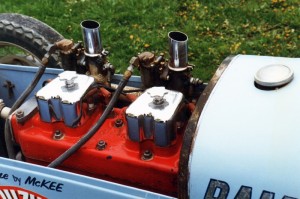 horsepower with a multitude of aftermarket and homemade performance parts.

It was a favorite of two types of motorsports fans.

First, there was the type that looked at it for performance street. But the performance improvements that were possible also made it an excellent candidate for oval track racing with the sprint car (then called big cars).

There was one common component in a majority of the conversions, that being a pair of two-barrel carbs, usually Winfields.

All these conversions could run on either alcohol or high-test (then called ethyl) fuels, but for alcohol, it was necessary to open up the jets for more flow. The compression ratios were also higher for alcohol use.

The HAL conversion was a popular racing conversion for the Deuce. This conversion lasted into the 1950s where it was still competitive. On some occasions, the block was bored out to about 220 cid. 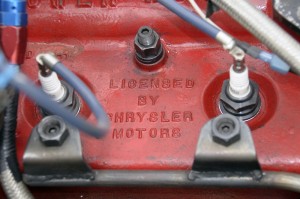 This high performance head was licensed by Chrysler for use by Ford. On the head was the warning to use high-performance spark plugs.

Besides the HAL cylinder head, there was also a balanced crank, and either a single or double overhead cam. The latter was the preferred system if the pocketbook would allow it.

It also used a pair of single-barrel carburetors. It’s compression ratio was about 7-1. It was reported that some of these set-ups were capable of producing one horsepower per cubic inch of displacement, which was a pretty heady accomplishment for the time period.

In addition, the very early HAL engines had carburetors sitting on top of the engine instead of the normal side-draft position. Hal B Block conversions have been noted with different displacements, some bored out to 220 cubic inches and sporting a balanced crank.

One restored 1934 HAL sprinter had an illustrious history and carried Flynn carburetors along with magneto ignition.

It burned alcohol. During its racing days, it won the NARA Northeast series and was reportedly driven by Indy 500 driver, Bill Holland.

Pop Dreyer was one of the best-known engine builders of the period. His cast iron heads connected to the B Block provided one of the best sprint car powerplants during the 1930s. The engine also sported twin Winfield carbs, aluminum intake manifold and a SOHC cam set-up. It was reported that these engines could produce over 200 horsepower. 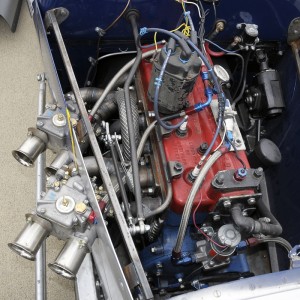 The ancient B conversions are even used today in land speed racing. Note this engine arrangement with the carbs again outside the body for better airflow into the carbs.

He later would build a block of his own which would incorporate a double overhead cam and five main bearings instead of the three on the standard B Block.

The RAMAR conversion consisted mainly of the RAMAR high-compression cast iron head. The set-up was a perfect match for the early B Blocks. The cast iron head was connected to a pair of one and one-quarter inch Winfield Carbs. Also included in the package was a dry sump oiling system and magneto ignition. The horsepower was reported at about 150.

This conversion was a joint effort with racecar builder Harry Miller. The effort was financed by a group headed by George Schofield. The main component that evolved was the so-called Miller High-Speed Head, which was carried on the valve cover.

Again, the Winfield carb would be a player with this conversion. One of the big players in this operation was Leo Goosen who made the head design drawings.

This conversion could really be included as a part of the previous paragraph, but for clarity purposes, it is presented separately. This conversion was born following the failure of Miller-Schofield to continue in business. Cragar decided to scoop off the pieces and modified the Hi-Speed Head to its liking and carrying the new name.

A Cragar conversion was seen with a bored 213 B Block with the Cragar head, a pair of Winfield carbs, a drilled crank, and a pressure oil system. 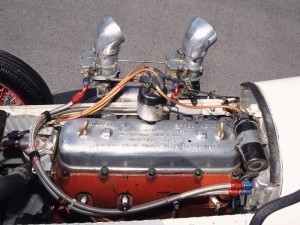 Both the Miller and Schofield names are contained on the valve cover of this engine.

This interesting conversion was somewhat different from the others of the period. It featured, for example, a Riley four-port OHV head, a pair of Stromberg 97 carbs and Mallory Ignition. The configuration featured intakes inside the head with exhausts in the block. It should be noted that replicas of the Riley head are currently being fabricated by the Scalded Dog Speed Parts in Batavia, Ohio (513-724-0700) to precise detail of the original.

(Note) The author would like to thank Charlie Yapp for his assistance in this article. 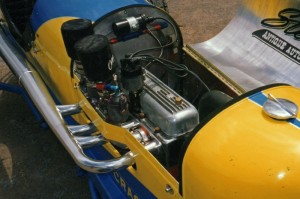 The Cragar conversion was basically the same as the Miller-Schofield. 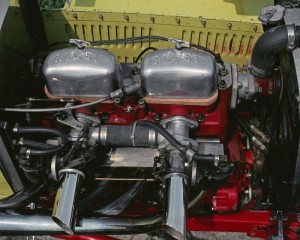 There was certainly no mistaking the Riley conversion with its carburetor positioning. 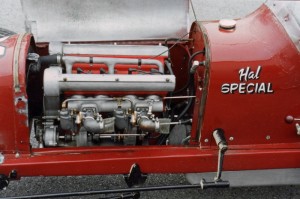 This is the double overhead cam version of the HAL conversion, which put out considerable more power than the single cam version.