The Pontiac L-head straight eight was used in production cars for 21 years between 1933 and 1954. This classic engine was advertised as a powerplant that could run 100,000 miles without a major overhaul. 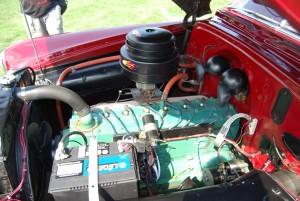 The underhood area of a 1950 Pontiac Eight owned by Chris Wynstra of Franksville, WI, looks pretty much the way other straight eight Pontiacs do, but sometime during its existence this car was converted to propane power.

The Pontiac L-head straight eight was used in production cars for 21 years between 1933 and 1954. This classic engine was advertised as a powerplant that could run 100,000 miles without a major overhaul.

Pontiac was actually launched as “the Chief of the Sixes” in 1926. It was a lighter “companion car” for the Oakland. The Pontiac sold well, while the popularity of the Oakland declined. By 1932, the company dropped Oakland (which had a V8) and offered a Pontiac flathead V8. It used the basic engine as the Oakland, although it had some detail changes. A year later, the straight eight replaced the early V8. This type of engine then survived at Pontiac until 1954. 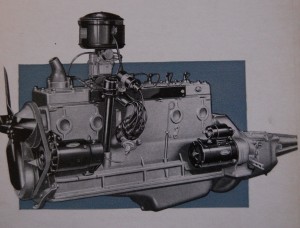 Over the years the straight eight was sold in different displacements and horsepower ratings. Details like the style of spark plug loom used are apparent at a close look. This engine has the 1952-1953 style spark plug arrangement.

Two ponies were added to each in 1952-’53. In the last straight eight year, 1954, the synchromesh engine’s rating was 122 hp and the high-head version advertised 127 hp. That was the maximum output before the V8 arrived.

Right from the beginning, the Pontiac straight eight had five main bearings and solid valve lifters in the side of the block. A Carter one-barrel carburetor was used through 1939. A Carter two-barrel was used from then on. In 1947 the dual-throat carb was switched from a Carter WDO to a Carter WCD. The WCD was also used on Buick 8s and was then modified for early 1960s Ramblers, putting the linkage on the opposite side. Rebuild kits are the same, though. If your parts supplier can’t find a Pontiac carb kit listed, try looking for Buick or Rambler parts.

Various other accessories on the Pontiac eights changed from time to time. For instance, the metal spark plug wire looms have the same look in 1952-1953, but were changed in 1954.

Both the carburetors and generators on these Pontiacs have provisions for oiling. If you tell the young man at the Quik Lube to oil your generator, he’ll first have no idea what a generator is, and when you explain that it’s like an alternator, he’ll tell you that it doesn’t need oil. It does!

The Pontiac Eight was offered with Hydra-Matic Drive for the first time in 1948. Cars with this option used a unique linkage that operated off the foot-operated starter motor. The linkage chokes the carburetor, squirts a drop of fuel into it and moves the gear shifter from the reverse position (used for parking) into neutral, while starting the engine. Most of the time, if you bypass the linkage and try to start the car in the conventional way, you will flood the engine. 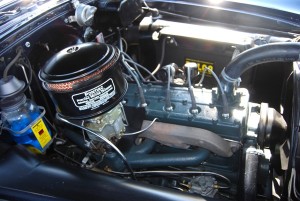 A good example of a detailed engine compartment in a 1954 Pontiac with a straight eight engine. Braided spark plug wires and old style hose clamps would add to the originality, but this is still a nicely done restoration.

Pontiac straight eights seem to be catching on a little bit with hot rodders wanting to put something different under the hood of a car they’re building. There’s a lot of good information about these engines posted on the HAMB—a popular hot rod Internet bulletin board. People are also asking how much these engines are worth. The consensus among hot rodders seems to be that the Pontiac eight is a “boat anchor” that isn’t worth a lot, but a few feel differently.

Apparently, the question of value was raised because many hot rodders who buy a pre-1955 Pontiac immediately yank out the stately L-head engine and Army-tank-proved Hydra-Matic in favor of a hotter mill. They install modern V8s. In most cases, a Chevy 350-cid V-8 replaces the factory-installed straight eight with a Turbo Hydra-Matic transmission behind it. This leaves the hot rodders with a big hunk of iron they then want to sell. It then becomes “rare and valuable.”

These fellows aren’t too interested in the Pontiac Eight’s reputation for being a 100,000-mile engine when many other motors tended to last 60 percent as long. A few rodders do get a little creative and ask about the availability of vintage speed equipment for the Pontiac Eight.

They want to know if aftermarket suppliers back in the day offered fined aluminum heads or split manifolds for this motor.

Some such hardware was produced in the early ‘50s, although the 1949 Bell Auto Parts Catalog only listed speed equipment for Ford flathead sixes, Studebaker Champion sixes and Chrysler and De Soto flatheads, in addition to the normal Ford and Mercury V-8 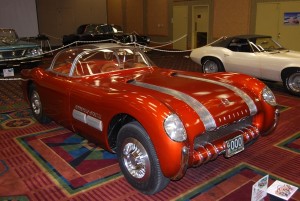 One of the sexiest cars to use the Pontiac straight eight was the 1954 Bonneville Special dream car. It had a fiberglass two-seat body, a canopy top It had a 268-cid that was painted bright red with chrome accents.

goodies. A few modern hot rodders fabricate their own Pontiac Eight performance parts and some look pretty cool. At least one Pontiac “flattie” was headed to Bonneville last year.

An interesting article touching on straight eight performance was a road test of several cars in which a ‘54 Pontiac Eight pulling a trailer was compared to contemporary V8s similarly equipped.

The cars were tested pulling a trailer and not pulling a trailer. The test results indicated that the Pontiac Eight performed the best of the pack when the trailer was attached since it “out-torqued” them.

So what is a Pontiac straight eight engine worth to a collector? There have been ads in collector publications asking as much as $2,000 for a straight eight and someone on the HAMB said he’d sell his for $100.

In the real world, people in the know about these engines will pay $400-$500 for a good used one. A Pontiac collector restoring a car with a bad engine will probably spend more.

An unused new-old-stock straight eight long block or an entire engine that has been correctly rebuilt would be a steal at $2,000. A complete rebuild of such an engine with no cutting of corners can cost as much as $1,000 per hole or $8,000 according to professional rebuilders. 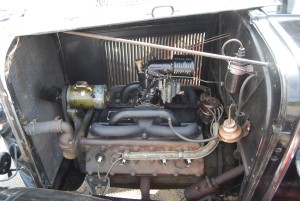 This is a 251-cid 1930 Oakland V8. It has two block castings 90 degrees apart and cast integrally with the crankcase. The horizontal valves are operated directly by rocker arms working from a centrally located, chain-driven camshaft.

Of course, if you remove that heavy engine and take it to a machine shop, then pick it up, put it together and re-install it yourself, you might beat this price if you don’t count your labor. So, it is easy to understand why a lot of pre-1954 Pontiacs are getting V8s today.

If a car collector brings a Pontiac straight eight to your shop to have it rebuilt, where do you get parts for it? California Pontiac Restoration (www.pontiacparts.net) advertises Master Overhaul Kits in the Pontiac-Oakland Club International (www.poci.org) magazine Smoke Signals.

If you have a Pontiac eight earlier than 1937 vintage or if you want to compare suppliers for other reasons such as parts brands and price, vintage engine parts suppliers such as Egge Machine (www.egge.com), California Obsolete Engine Parts (www.danamotorssac.com), Northwestern Auto Supply (www.northwesternautosupply.com), Kanter Auto Products (www.kanter.com) and Terrill Machine (www.deleontexas.com/chamber/tmachine.php ) would be good places to look for help with engine parts. 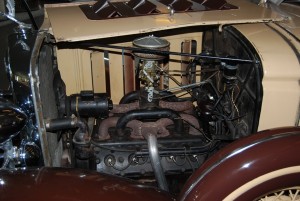 This 1932 Pontiac V-8 is the Oakland engine with the synchronizer moved to the left side instead of the right. It also has a higher 5.2:1 compression ratio and more horsepower. You may see different details in the Pontiac version.

(For additional suppliers not listed here, refer to the Engine Builder Buyer’s Guides)

Finally, if you need specifications, copies of shop manual pages and other materials that provide instructions on rebuilding a Pontiac straight eight engine, the Pontiac-Oakland Automobile Museum (www.pontiacoaklandmuseum.org) in Pontiac, Ill., houses a large archive of such materials and a research service is available. 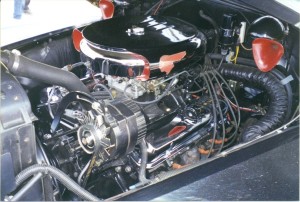 This ’48 Pontiac has been upgraded with a modern Pontiac V8. 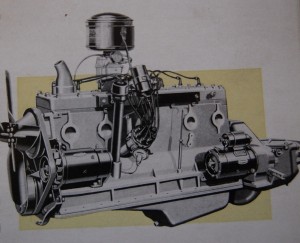 This Pontiac straight engine has the 1954 style spark plug arrangement. Air conditioning was introduced by Pontiac this year and the rare GM Harrison system had the condenser in the trunk, but some extra hardware under the hood. 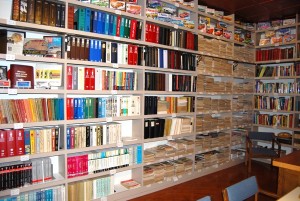 Specs, copies of shop manuals and other materials providing instructions on rebuilding a Pontiac straight eight engine are housed in the Pontiac-Oakland Automobile Museum (www.pontiacoaklandmuseum.org) in Pontiac, Ill. 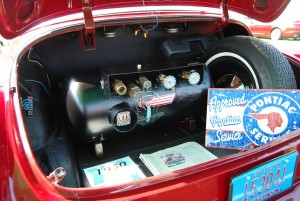 Located in the trunk of Chris Wynstra’s numbers-matching Pontiac Eight is a propane system to fuel the old car. It is not known when the conversion was done or who did it.