Being an FE Ford fan, and having raced them, and still owning several, “Animal” Jim enjoyed Engine Builder’s article about FE Fords in the April Issue. Jim has been in love with FE’s since his brand new ’63 R code he had when he was 22. In this article he share’s five points prior to the 2014 PRI show. 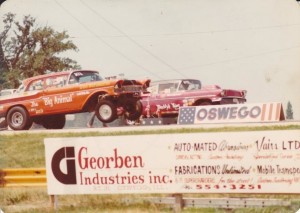 Animal Jim’s Big Animal ‘57 Mercury in 1975, Oswego, IL. The Big Animal, which Jim still has, is powered by a FE 427 Ford Tunnel Port. Left lane is Frank Marshall in his Daddy’s Thing ‘58 Chevy, 427 powered. From the book “Lost Drag Strips/Ghosts Of Quarter-Miles Past.”
Photo by Brent Fregin.

Being an FE Ford fan, and having raced them, and still owning several, I enjoyed Bob McDonald’s article about FE Fords. “Out With The Old and In With the New/Or Keep the Old” in the April Issue of Engine Builder. I have been in love with FE’s since my brand new 63 R code I special ordered when I was 22.

Along with all the other American brands of engines I build, I still do some FE’s.

There has been a big resurgence of the 427s, especially with aftermarket aluminum blocks, heads, even tunnel rams, and stroker kits out the whazoo.

Warren Shafer, owner of Shafer’s Classic Reproduction Parts in Tampa, FL just left my shop with a 406 Tri Power FE I built for him. Warren is finishing a rotisserie 63 Box Top Galaxie G code of his own.

And, here I go again. I am freshening my 427 FE Tunnel Port engine right now. That sewer port engine powered my first serious drag race effort, the Big Animal ‘57 Mercury, till October of ‘79. 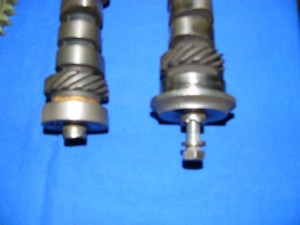 A closer view of the early 58 to 62, spring held, flanged cam on the right. The new plate retained the type on the left.

My intention is to have fun driving that car again, and augment some wonderful memories.

Big A was one of the last cars down the famed Oswego, IL drag strip. In October of ‘79, my friend Bubba Thurlby, the Oswego track manager, requested me to bring the Big Animal that last day for a couple “Goodbye Runs.” There were tears. I never ran the car again.

I had been Oswego RTE (Run Tough Eliminator) track champion in ‘73 and ‘74 with that car. And won RTE countless times. That big orange ‘57 Mercury is synonymous with Oswego history and lore. 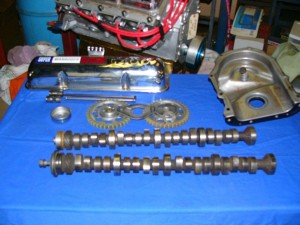 This is a picture of the early 1958-1962 flange, spring retained type cam. Also, the special steel spring pocketed front cover and spring. Above the flanged cam is a ‘63 and later type plate retained cam. The two types of timing gears, one on left is a later gear with cam spacer molded in the rear. The gear on right is early type, flat on back, and uses that remote spacer. Never mix the remote spacer with the late molded spaced gear. It will create an additional very destructive .222 end play. If the early flat backed gear is tried with out the remote spacer, the engine will not turn after cam bolt is tightened.

There is a great book called “Lost Drag Strips/Ghosts Of Quarter-Miles Past.”

I’m one of the ghosts. That 2013 book includes the Oswego Drag Strip. On page 92, it features a picture by Brent Fregin of my Big Animal and Frank Marshall’s Daddy’s Thing ‘58 Chevy, side-by-side, wheels up with the Oswego Sign in the foreground. The book is a masterpiece by Tommy Lee Byrd. The foreword is written by Don Garlits.

My FE experience started in March of 1963, when I took delivery of a special order, brand new, all black R code Mercury two-door sedan. It was ordered radio delete, black walls and rims, with dog dish hubcaps, bench seat, no creature conveniences, and no badging. It was rumored it had no heater. Not true. I live in the Midwest.

It was a real sleeper. Who would expect a ‘63 Mercury Breezeway entry level plain Jane would harbor well over 425 horses under the hood? That rare car is on a HP FE Mercury registry.

The Tunnel Port and High Riser with Two four barrels, were both pretty close to 600 HP.

I was involved with area stock car racers who inspired me to try both High Riser and Tunnel Port. After using a Tunnel Port in my own drag car, I favor the Tunnel Port.

The Thunderbolts had high risers. But, if Tunnel Ports had surfaced in ’64 and not ‘66, they might have been used in the T-Bolts. 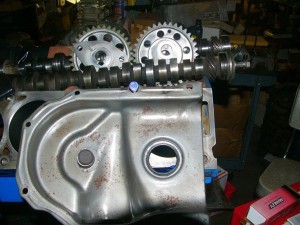 1958-1962 FE engines had cams, like the one pictured, just above the front cover. That big flange rode on front of the block. The cam was retained with spring in special steel front cover as pictured here. In 1963, Ford switched to a non-flanged cam and retaining plate with a more modern timing gear.
An important note. The cam spacer is molded in the gear on the left. The right gear is flat and used a remote spacer. Never ever use the remote spacer with the later already space formed gear.

NASCAR let the High Risers run in ’64 and then outlawed them because of a flat hood rule. The high riser needed a hood bubble. NASCAR also outlawed the 427 Overhead Cammer. But, NASCAR did let the Ford racers use the Medium Riser with two Four barrels and a flat hood. They ran fair.

In ’66, the Tunnel Port came on the scene, which was a Cammer type port compromise. NASCAR allowed the two fours. The Tunnel Port is what Fred Lorenzen, Cale Yarborough and David Pearson used to terrorize NASCAR.

It was also used to win at LeMans 1,2,3, in 1966. Number 1 was driven by co-drivers, Bruce McLaren and Mark Donahue. Crew chief Max Kelly, in the later years, became one of my treasured friends. Max’s winning car is in the Indy Speedway Museum.

With the new interest in the FE engine, I am compelled to offer some FE tips to share, especially if getting involved with real old vintage FE stuff.

Pre-1963, half the FEs used a flanged camshaft with a special steel front cover with a cavity harboring a retaining spring, similar to the MEL 383 and 430.

In ‘63, half the FEs were changed to what I call a normal cam and retaining plate held with two short 7/16 button head Philips fasteners with lock washers. (I swap those for Allen button heads and Loctite). 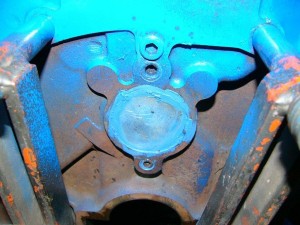 Another important note — The rear cam plug on FE Fords is faced with cup inward to give it cam butt clearance.

I had customers bring me destroyed engines, because they used a newer integral space stepped gear and the .222 spacer gave the cam an extra .222 end play. The cam lobes, lifters and their bores did not dig that. The cam bearings were not fond of it either.

If an old style flat upper timing gear was tried without the spacer, it would be found, because the cam would lock up when the top timing gear bolt was tightened.

Those earlier pre ‘63 blocks could easily be modified to use the newer retainers and cam. Remove the two soft oil galley plugs and tap to 7/16 course. And, make sure you acquire needed hardware. And use a timing set with the integral cam gear spacer.

Another common mistake was the retainer was not symmetrical and would get put on cockeyed.

And here is a biggie!!! The most common error – the rear cam plug has to go in with the cavity facing IN to make room for the butt of the cam. With the plug put in like a conventional Welch plug, it will cause lack of cam end play, or even bind, and usually will break the retainer plate, even if the retainer plate is installed correctly.

I had a customer with a ‘66 GT 390 in the early ‘70s, that had all the above wrong. Somewhere in its life, an early timing set and spacer was used. Then my customer put in a new timing set that had the .222 step built in, and installed the damn spacer too. Plus they had the retainer cockeyed, and cam plug with the cavity facing out, pounded in deep.

Number 4 cylinder had water in it. As a bonus, the wrist pin keeper got loose and the pin had sliced into the cylinder wall. What a mess. But I was young and up to challenges. 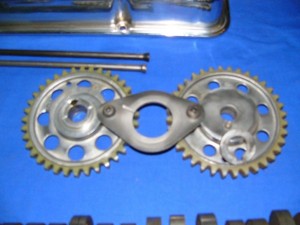 Good view of the early flat rear, upper timing gear on the right, with the needed remote .222 thick steel spacer. The later upper timing on left has the spacer molded on the back. Do not mix these up. Never use the remote spacer with the late spacer step molded gear. The steel retainer was used on both types from 1963 on.

Miraculously, I saved that block, which was not usually the case. I sleeved number 4 cylinder, and sleeved and dressed a couple of chewed lifter bores and bosses. I used a post ‘63 1/2 stock Ford .500 lift, 324 duration, 427 solid lifter cam, with Crane shell lifters and push rods.

Flywheels and starter combos changed in 1965. 1958 through ‘64 had the long bendix on the rear and a 163 tooth Flywheel. The Bell housing pocket was deeper than the ‘65 and later, to accommodate that long early type starter drive. The ‘65 and later starter was shorter and had a lump type cover over the starter drive lever assembly. The later flywheel has 184 teeth. Do not mix them.

FE’s alternator and generator brackets mount to the water pump differently. Sixty-three and ‘64 used both. My 390 Y code ‘63 Mercury has an alternator, my ‘64 Ford R code 427 has a generator. Who knows?

In ‘64, Top Loader 4 speeds were used instead of the Borg Warner’s that ate its own second gear and cluster frequently.

There is much more to know about FEs, but we are out of time again. Contact me if desired.

This writing I tribute to an FE fanatic and collaborator friend. The recently late Joe Kozol from Joliet, IL. The flanged cam and cover pictured were Joe’s. I will miss him.

The FE – True Love. You never need to say your sorry!

Advertisement
In this article:Five Tips, PRI

Five Points to Ponder Prior to PRI