A crude-looking ’53 Studebaker drag racing car from Iowa has its share of rust, dings, dents and paint flaws, but under its hood is a one-of-a-kind Pontiac intake manifold that has some very sophisticated engineering behind it. Davenport, IA, resident Jim Allen has owned the Studebaker Starliner Coupe since 1959. It was back in 1964 that he purchased the factory experimental intake to go on the 421-cid Pontiac Super-Duty V8. 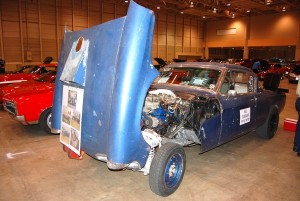 The car ain’t fancy, but it’s pretty sophisticated under the flip-up nose. It looked like a duck out of water at a Pontiac collectors’ convention in Wichita.

A crude-looking ’53 Studebaker drag racing car from Iowa has its share of rust, dings, dents and paint flaws, but under its hood is a one-of-a-kind Pontiac intake manifold that has some very sophisticated engineering behind it.

It was back in 1964 that he purchased the factory experimental intake to go on the 421-cid Pontiac Super-Duty V8 nestled under the Studebaker’s hood. Only a small number of the prototype manifolds were made. Allen’s is thought to be the only functioning system to exist.

Allen bought the hardware from legendary drag racer Arnie “The Farmer” Beswick. At the time, changes were taking place in the sport of drag racing that favored fuel-injected cars over carbureted cars. Beswick had also lost Pontiac support for his racing efforts after GM told its divisions to get out of racing in 1963. For one or both reasons, Beswick — a popular racer who Pontiac had helped out — decided it was a good idea to get rid of the “bathtub” manifold. 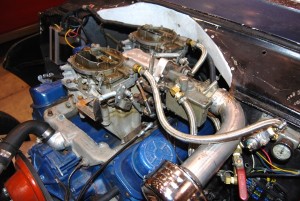 Here you see the one-barrel Carter sidedraft carb offset between the two four-barrels. The elbow coming out of it has a chrome air cleaner on its end.

The arrangement was so complicated that Pontiac ultimately decided the system would be too unreliable if it was offered on production cars. The handful of dual quad manifolds that were already made were fitted with a block-off plate over the third and smaller carburetor flange in the center.

Allen did not get the complete system from Beswick. For years, he had wondered about how to set up a center carburetor to work only during the car’s idling circuit. Then, he received a call from Dimitrie Toth of Oxford, MI.

Today, Toth is a post World War II construction equipment historian and collector, but for years, he worked at Pontiac. In fact, his father and his grandfather also worked in the Pontiac foundry from 1936 on and his father was often kidded that his initial was stamped on some rare Super-Duty engine parts.

Toth had once owned a lightweight Pontiac Catalina coupe with a 421 Super-Duty engine carrying a dual quad manifold. We met Toth in the 1980s at a Pontiac-Oakland Club International (www.poci.org) convention. The next week we visited him in Michigan, did an article about his car and went with him to the retirement party of Pontiac engine wizard Malcolm “Mac” McKellar. 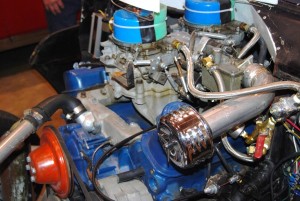 The two four-barrel carbs are jetted for racing and the third carb in the center is used for the idling circuit only.

“I’ll tell you why that manifold was designed,” Toth advised us. “First of all, they had been running two-plane manifolds combined with a 180-degree firing order for years. In ’61 or ’62, they looked at these. They were good manifolds, but they were running out of plenum and manifold length with the 421.”

Toth explained that sometime in 1961, a man named Skip McCully came to Pontiac to work with “Mac” McKellar and some other engine engineers. “They experimented with a dual HV ram type manifold,” he noted. “Then, in Dec 1962, they put together a manifold with an idling circuit as an over-the-counter street package.” (Toth noted this manifold is pictured in Pete McCarthy’s book on Pontiac performance engines.)

The top of this manifold had a two-plane design and other goodies. “The service engineers (who approved of it) were responsible for parts sold to dealers,” Toth said. “But, the production engines were different.”

The engineers came up with Part No. D811690, which was an adaptor to fit between two four-barrel carburetors on top of the manifold and hold a Carter sidedraft carburetor on the driver’s side. Toth said the Carter carburetor manifold had a series of bell cranks and slides in the blueprints. “It looked impressive,” he added. “Sort of like a tri-power carburetor setup with a ram-type dual-quad intake.” 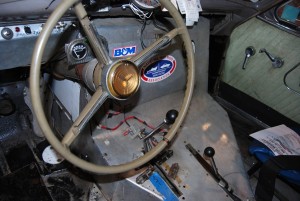 The car’s interior reflects its utilitarian nature. Allen’s racing is a low-budget effort, although he has picked up some fantastic hardware over the years.

The service engineers were impressed by the manifold’s performance, but had issues with it and the linkage system. There was no provision for an air cleaner or silencer. The setup was too high to fit under the hoods of cars that were continually getting lower. There were questions about how to run cold air in. Still, the service people (many at the time were enthusiasts) were encouraged.

Since the Pomona Winternationals drag races were coming, they selected two Carter four-barrel carburetors to use with the manifold as well as the block-off plate for the center carburetor flange. Eighteen manifolds were manufactured, but Pontiac never made the center elbows to mount the third carburetor on.

“A month later, in mid-January 1963, they came up with a Gen II version of the manifold,” Toth revealed. “It satisfied all the issues they had with the first design. They deleted the entire idling circuit, went to different, more tractable four-barrel carburetors and lowered the manifold so air cleaners could be fitted. Even more dramatic was a change that made provision for a water jacket for cooling. Only four ‘bathtub’ manifolds with water jackets were produced.”

At the end of January 1963, the GM racing edict came down from top management and Pontiac’s racing program came to a dead halt. There would be no more bathtub manifolds or dual-quad manifolds. “That was in ’63,” said Dimitrie Toth. “Now, fast forward to September 2013. I go online and here’s this Studebaker on my computer that was racing at Cordova Dragway. The Studebaker has a Pontiac 421 Super-Duty V8 with a bathtub manifold with three carbs, but the third one is a Stromberg.” 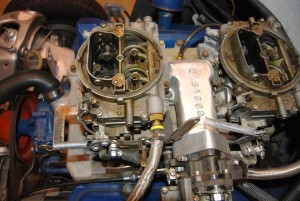 The shiny part stamped D811699 is an adaptor that fits between the two four-barrel carbs to mount the Carter sidedraft one-barrel carb.

Toth got into the vault in the Pontiac Engineering department where the original design was on microfiche and copied the drawings. Then, he got in touch with Allen and his crew thru Cordova Dragway. “Their Studebaker was halfway there and on the right track,” Toth admitted. From that time until about April 2014, Allen and his friends got the drawings and information from Toth and were able to put a functioning system together with a Carter carburetor. “Pontiac never had this system in a car,” Toth pointed out. “They may have made a dyno example, but I believe this Studebaker to be the only car ever to carry this system.” 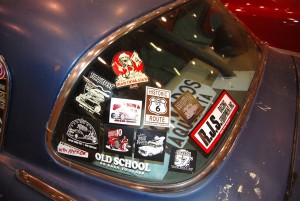 The ’53 Studebaker has been a racing car since 1959. Owner Jim Allen purchased the experimental manifold from drag racer Arnie Beswick in 1964.