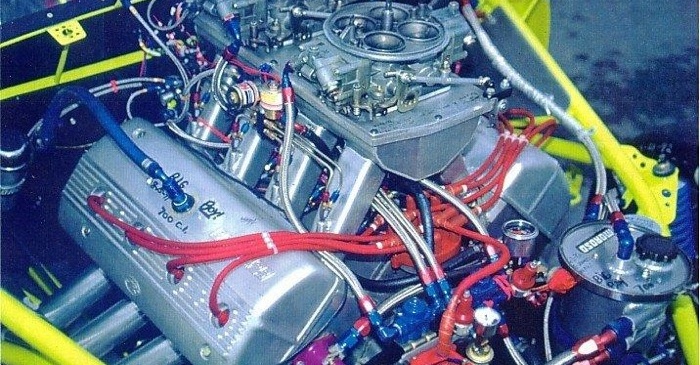 From 1987 to 1990, Animal Jim’s 666-inch A/R Ford Hemi Boss that was called Damien, was all wrong for Jim’s purpose, which was running with a nitrous NOS Fogger power adder. In ‘90 and ‘91 Pro Modified, Damien was one of three engines that powered his Rick Jones Pro Mod Probe. Find out how Animal Jim made Damien work. 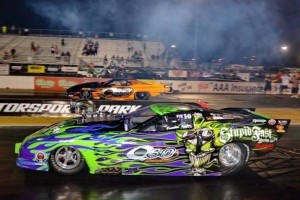 From 1987 to 1990, my 666-inch A/R Ford Hemi Boss that we called Damien, was all wrong for my purpose, which was running with a nitrous NOS Fogger power adder. In ‘90 and ‘91 Pro Modified, Damien was one of three engines that powered my Rick Jones Pro Mod Probe.

In fact, Damien was the engine in my Rick Jones Probe when we ran the first Ford carbureted door car 200 mph quarter mile pass. It was the Probe’s 13th run on a Wednesday night at the USSC (United States Super Circuit) race, July 4, 1990 in Norwalk, OH. I also won the event versus the Canadian, Al Billis in the final.

The critical thing wrong with using Damien with nitrous was that the pistons were wrong for nitrous. The compression ratio was way too high at 17:1. I kid you not. The extensively lightened and gas-ported pistons were not ideal for power adders. Rings were molly .043­­– 1/16 and 3/16 low-pressure oil rings, and lightweight tool steel pins with needed ring support buttons to accommodate the 5-inch stroke.

Eventually, we had to use heavier pins. The lighter ones started to bend and flatten on the ends.

It is funny how the aluminum pin bosses held, but the tool steel wrist pin did not. Reminds me of the stock Ford 302’s chronic wrist pin problems a couple decades ago. The steel pin ends wore against the aluminum. Those 302 pins would be so bad the engine idling would sound like a diesel.

Damien was originally built for use in IHRA Mountain Motor Pro Stock in the mid-’80s and was never intended for nitrous.

But in mid 1987, I hurt my original 672 Ford A/R Boss Hemi I was running in Outlaw PS with nitrous. The Monolith had stronger pistons and pins, and a much safer 15:1 CR. When I damaged the Monolith, I still had many contracted booking dates and was leading the points in UDRA. I desperately needed to keep running. So the 666 was put into nitrous service.

I put the name Damien and 666 CI, in huge purple vinyl letters right on the hand fabricated shiny aluminum Boss Hemi valve covers. The national hot rodder magazines really dug that and one wrote an article about Damien with pictures.

Sure, we hurt pistons a few times with both engines if we got too frisky with the tune up, but that was just like everyone else. If you ran nitrous, no matter who you were, you hurt pistons.

One reason we got by was my baseline NOS fogger tune was fairly conservative. Jetting was 36 nitrous and 38 fuel jets, at 93 supplement fuel pressure, 900 pounds bottle pressure, and I kicked back timing 10 degrees, simultaneous with nitrous deployment. Static timing was 25 degrees. I only ran one system. And of course Sunoco Nitrous Blend fuel (Sunoco was my fuel sponsor).

Another huge factor that helped keep Damien alive was using a manual momentary toggle switch on the steering wheel to deploy the nitrous system after the launch. It wasn’t until ‘92 when I got my new Haas WunderBird and my newer 698 and 700-inch Big Boy engines (see page 46) did I launch with nitrous. And then I used two systems with a timer for the second system. Trying that with Damien would have provoked tragedy, I am sure.

So, in ‘93 I sold the more fragile 666 Damien. It had done a good job for the time we used it. We needed the money to keep up-to-date (IHRA Pro Mod allowed only 712-inch engines with nitrous back then. Now over 800 inches is allowed).

In September 1993, my career was looking up. I got a decent price for that nice 666 CI engine, I was running good and I was voted as one of the three finalists, along with Wild Bill Kuhlmann and Scotty Cannon, for Car Craft Pro Mod Driver of the Year. I was so pumped. I made the decision with this fresh money, and recognition, to run for the IHRA Pro Mod points in ‘94. No bookings. Save it all for IHRA National events and hopefully pick up a major sponsor.

The ‘93 IHRA season was winding down. I decided to run one of IHRA’s last events and reveal my run for the IHRA championship intention for ‘94 to the fans and media. Running that race, and making that announcement, would be good PR.

I never trust when things are going too good. On Sept 23, 1993, two weeks after the Car Craft awards, during the first qualifying session at the IHRA Presidents Cup at Maryland International, I went from hero to zero, putting my fabulous WunderBird upside down. When I pulled my 4 speed Lenco’s third gear Hurst lever, I hit 8 quarts of Chuck Peterson’s undetected synthetic oil from his exploded engine the run before.

I took my busted up Bird right to Jerry Haas. It took all the money I got for Damien, plus more, to put the WunderBird back in shape for 1994.

One of the causes of my crash, besides gross negligence by the IHRA, were billet rods. Chuck’s were brand new and one broke. Other racers experienced the same problem back then. Unfortunately, ballistic diapers were yet to come.

Thankfully, I was running Bill Miller forged aluminum rods (BME was another one of my many product sponsors. Thanks Bill). 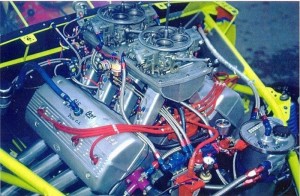 Today, billet rods are no problem. It was told that 20 years ago, an unknown, defective batch of aluminum billet material got into the manufacturing industries. I always say, “Fate is the Hunter.”

The reason I ended up in Dan’s Mustang was because in ‘96 I was featured with my Haas WunderBird at English Town performing in a special CBS Wide World of Sports program called the “Ultra Team Challenge.” On the first run I put my fabulous WunderBird on the lid for a second time.

I still had bookings. I called my friend Dan in NC. He had just finished putting the enlarged Damien in his new Tommy Mauney late model Pro Mod Mustang. Dan and I made an agreement for him to provide the ride for me to fulfill my exhibition Ford Expo and Fun Ford dates. I contacted the promoters who booked me. They all knew my Bird was crashed. They were fine with me driving the new Mauney Mustang instead of my WunderBird. So, Damien and I would be together again.

By ‘96, when Dan had Jon Kaase update Damien to a 698, Jon used Damien’s original Williams Tunnel Ram and tandem Barry Grand Dominators to dyno the updated and enlarged 698. Later, Dan put a set of split BG Dominators and a Barry Grant Nitrous system on Damien. That is what was on the enlarged engine when I teamed with Dan to do my obligated appearances.

Damien now made more horsepower than my older 698 Big Boy. About 1,350 hp without the nitrous.

The crazy part back then, the dyno folks were leery of testing those engines with the nitrous. They claimed the nitrous was too violent and would damage the dyno.

So when you got a Pro Mod nitrous engine, a good one would make 1,300 hp-plus with no nitrous. But with the nitrous it was an educated guess. The only way to experiment and prove your nitrous tune was to run the car and try to compare notes with someone reliable.

Eventually, the problem using nitrous on a dyno was solved. As far as I know, Pat Musi was one of the first to dyno using nitrous. I was a guest at his shop in summer of ‘97 and witnessed Pat doing so.

Figuring the math, I would say I was making 1,800 hp in the mid-’90s. The engine size rule in IHRA was still 712-inch max with nitrous as a power adder.

Today, with much bigger engines allowed, a lot of advanced technology and the ability to dyno test nitrous combos is a big reason nitrous cars are so much quicker and reliable.

Being in my December years, I recall in the ‘50s the ability to break 10 seconds in a door car was argumentative among the naysayers. I wonder what they think now?

Advertisement
In this article:Damien, Fast Lane

Damien Was All Wrong