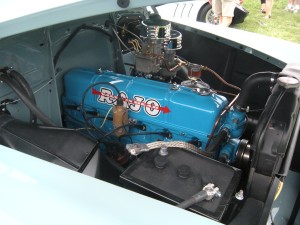 It was an ordinary-looking 1952 Chevrolet Styleline Deluxe sedan until the owner — James W. Hass — opened the hood. Instead of an ordinary Chevrolet overhead-valve “Stovebolt Six,” the car’s 216-cid engine was equipped with the last RAJO cylinder head which had the stock intake and exhaust manifolds and a stock Rochester carburetor, as well as a RAJO intake manifold on a second set of intake ports with a second carburetor. Each of the carburetors was engineered to feed fuel to all six cylinders.

Hass had a good reason for adding the unusual vintage performance equipment to his car. In 1949, his grandfather Joe Jagersberger developed this so-called Compound Induction Cylinder Head for the Chevrolet engine.

In June 1952, he purchased the two-tone blue Chevy sedan and swapped cylinder heads with an older Chevy to give the ’52 the Compound Induction head. Joe Jagersberger then passed away, leaving a long legacy of automotive achievements behind him.  Joe was the “JO” in RAJO. The “RA” stood for Racine, WI, where he settled after some exciting years in other environs.

Joseph W. Jagersberger was a very early racing car driver who competed against Louis Chevrolet prior to the first Indianapolis 500-mile Race. He was also the manufacturer of early speed equipment and his RAJO heads became well known to Ford and Chevy lovers.

According to Haas’ research, his grandfather was born Feb. 14, 1884 in Vienna, Austria of Austrian parentage. He went to high school, followed by two years of junior college. Then, he became an apprentice at Mercedes. He apprenticed for four years in the automaker’s Vienna factory. Meanwhile, he continued going to school five nights a week at Vienna Polytechnicum. He learned to speak German and French, as well as some Italian and Spanish.

After his apprenticeship, Jagersberger went to work at Mercedes’ main factory in Stuttgart, Germany. He was an automobile demonstrator and public relations man.

In 1897, he began his racing career in France. In 1903, millionaire John J. Astor (the wealthiest man to go down on the Titanic) brought Jagersberger to the United States to work for him.

He built one of the first racing cars in this country for Astor. Later, Jagersberger did the same for Harry Harkness, vice president of Standard Oil Co. and a copper baron named McCoy.

On June 19, 1904, Jagersberger and Harkness competed in a timed race from Boston to New York City. Between 1907 and 1909, he built and raced the speedboats Miss America 1 and Miss America 2.

In 1911, Jagersberger joined the J.I. Case Co. in Racine, WI. In addition to working on their Case passenger cars, he built four

racing cars for the company. He entered car No. 8 in the first Indy 500. Unfortunately, he did not finish. He started racing at tracks across the country, until he had a very serious accident on Nov. 4, 1911 in Columbia, SC.

Jagersberger lost his right leg and an eye and spent months in the hospital recuperating. The injuries ended his racing career. He remained a car enthusiast and, in 1914, he formed RAJO Manufacturing Co. RAJO’s first products included spark plugs, a water pump and an oil level gauge for the Model T Ford. The company also manufactured other engine parts.

In 1918, Jagersberger manufactured and marketed the first RAJO cylinder head that converted a flathead engine into an overhead valve power plant. This led to engineering and consulting work for numerous people. The company’s Los Angeles salesman Dewey Gatson helped popularize the heads. Wisconsin native Harry Miller, who was building race cars in Los Angeles then, was a customer.

Gatson was known as “RAJO Jack” and “Jack DeSoto.” He was one of the first African American race car drivers in America.

Gatson souped up his own Model T with RAJO heads. In the early 1930s, Jagersberger named Gatson his Los Angeles dealer and salesman and RAJO Jack was born. Gatson raced in many venues and used many different engines.

Jagersberger — who called himself the manager of RAJO Motor Co. — once wrote a personal letter to a customer who had requested information about his products. “I have retired from automobile racing for good,” he wrote. “But it was those three years of track and road contests which gave me the idea for designing the RAJO cylinder head.” He went on to explain how he had spent an entire year in designing, testing and perfecting the RAJO Valve-in-Head before it was put on the market. “There is nothing more significant of the importance and value of this intensive work than the fact that today, the first RAJO sold is still giving that wonderful RAJO service that only this head can give.”

Jagersberger promised the customer tremendous power, flexibility and economy. His head gave the Model T a speed range from 3 to 55 mph in high gear combined with 25- to 35-mpg economy. He also noted that the regular RAJO head cost $57.75 and a special racing type RAJO head was $78.75.

On June 18, 1919, Jagersberger married Amanda Olle. They lived at 320 14th St. in Racine. Amanda was Haas’ maternal grandmother. RAJO continued and counted many checkered flags in racing during the 1920s. In 1921, RAJO equipped cars took second and third place out of a field of 14 starters in a July 10 race at Independence, Mo. The next year a RAJO modified engine won Noel Bullock’s Pikes Peak Championship. Prior to 1930, “Racine Joe” had built around 50 engines, primarily for racing cars.

During the 1930s and 1940s, there was an intense rivalry between cars with RAJO power and Frontenacs that the Chevrolet brothers developed in the 1920s.

Then, World War II came along. Racing was, for the most part, suspended and RAJO made parts for tractors, tanks and war goods built by Caterpillar, Cadillac and U.S. Rubber Co.

After the war, Jagersberger designed the compound induction cylinder head for the 1941-1952 Chevrolet 216-cid in-line six.

As mentioned earlier, his modification to the Stivebolt six’s 15-bolt overhead valve cylinder head added another set of three intake ports above the three originals. This change permitted the addition of a multiple carburetion utilizing a separate intake manifold.

In total, Jagersberger made overhead-valve cylinder heads for around 4,000 Chevrolets and Fords before he passed away on Oct. 5, 1952. His company survived in Racine until 1980. On June 2, 2007, Racine Joe was inducted into the Sprint Car Hall of Fame in Knoxsville, Iowa. He has also been recognized by the Model T Ford Club of America. 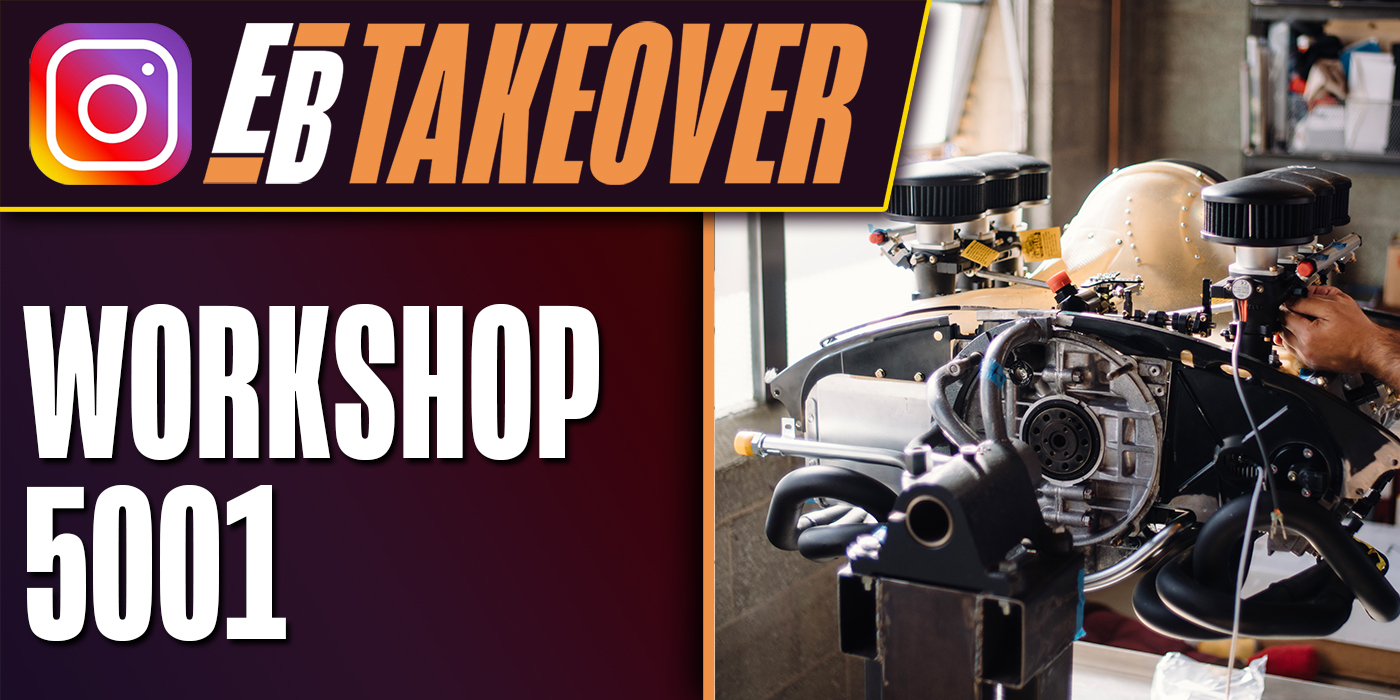