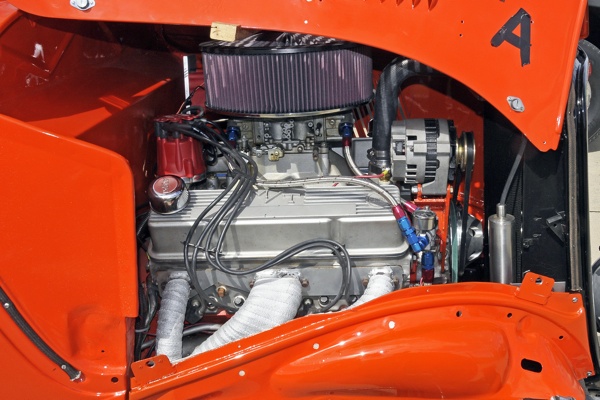 In Bill Holder’s opinion, there’s no finer place to find unique engine builders than the long super-smooth runway at the former DHL facility at Wilmington, OH. This will be the third article in Engine Builder honoring these efforts. 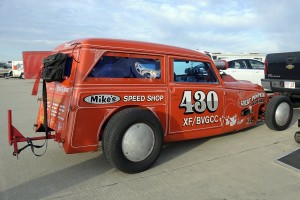 It might not look like a ‘47 Crosley, but that’s what this land speed machine started out with.

In my opinion, there’s no finer place to find unique engine builders than the long super-smooth runway at the former DHL facility at Wilmington, OH. This will be the third article in Engine Builder honoring these efforts. For previous articles on the engines raced here in southwestern Ohio four times a year, check out the December 2013 and June 2014 issues of Engine Builder or find them online at (www.enginebuildermag.com/magazine-archive)

So let’s get on track and see what we found.

Yep, the builder of this unique land-speed racer assures up that the body part is actually a ‘47 Crosley sedan. Owner Peter Keyser of Amherst, MA, explained that the B Block had been extensively upgraded for this motorsports mission. 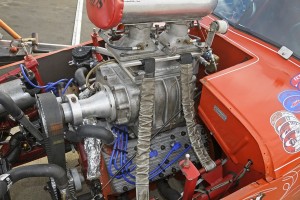 This Ford B Block engine was bored and stroked to over 300 cubic inches.

At Wilmington, the old Ford four-cylinder engine pushed the machine to just short of 140 miles per hour.

Also, it’s run about 151mph on the Bonneville Salt Flats, which was just off a world record.

A Ford engine powers a Ford chassis in this land-speed configuration.

Canadian Paul Calaguiro started with a small ‘74 Pinto 2300cc which was bored and stroked to 2700. But after that, it was gangbusters with an race-style Esslinger 14.9 CR Five-Tower Head. Inside, there are CP Pistons and Oliver Rods. A pair of 500cfm Holley carbs are in position over a homemade aluminum tunnel-ram intake. It burns VP C25 racing fuel.

Now to reveal the amazing aspect of this powerplant. The stock value for this four-cylinder has a factory-listed 86 horsepower but Calaguiro has pumped it up to an amazing 325 ponies. It has enabled a 146 mph jaunt down the Wilmington concrete. He explained that he gets about 9500 RPM when he goes through the traps. “I use a 1980s Doug Nash five-speed transmission that has a 1-1 gear ratio in fifth gear. 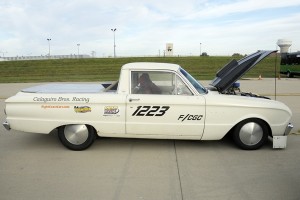 The Ranchero itself remained pretty much in stock trim.

“I am hoping that I can improve that figure in 2015 when I have closer gear rations for  the third-fourth and fourth-fifth gear shifts, along with possibly putting an a more aggressive cam.”

A strange combination of car and engine, wouldn’t you agree? But it works pretty good for Racine, Wisconsin’s John Kochell. Just check out it’s performance at Wilmington in 2014 when it flashed through the traps at 161.5 mph.

The stock specs on the engine showed that the 500cid engine already had 400 horsepower and 500 pound-feet of torque.

But John wanted more and got it kicking up the HP to 500 and the torque to 600. The goodies he used included flat tappet lifters, forged pistons, HP Rods, ARP Studs, and 10-1 Comp Heads by the Cad Company. And check out those silver tubes stretching from the air cleaner to the grille opening. “It’s a homemade cold air intake that I wanted to try out.”

For sure, it got a lot attention from passers-by! 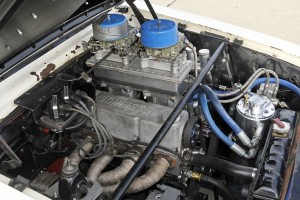 Hard to believe but that’s 2300cc Pinto power in this Falcon Ranchero.

The remainder of the powertrain features a T400 tranny. Kochell indicated that he works to be at about 6,500 RPM when it hits the traps. Needless to say, that classic body style of a 65 year-old Studebaker certainly gets a lot of attention.

Another interesting engine/car with this land-speed machine. First of all, there’s that vintage look of the ‘33 Ford Sedan body which certainly wasn’t very aerodynamic. But it seemed to get down the track pretty effectively.

Power is provided by a modified 1969 301 small block Chevy. It gets good power from its 13.5-1 Racing Head Service Heads.

There’s also a custom intake and the block was bored to 350 cubic inches with a stock 302 crank, aftermarket pistons, and a Holley 750cfm double pumper. All together, it’s provided the capability for a 147 mph pass.

The creation of Joe Tutterrow of  Webster, Maryland explained that he was able to coax about 750 horses out of those minimal cubic inches.

“It’s running about 7500 RPMs when it hits the traps, but I’m hoping with some upgrades I have in mind to be able to hit 8000 in the future. I think having a bigger carburetor with more flow might enable to achieve that.” 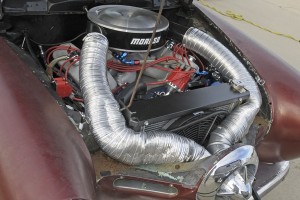 A Caddy engine and a vintage Studebaker, are you kidding? But that’s case here with 500 horses coming from this powerplant.

Checking out this macho-looking machine, it was a bit hard to believe that this was the first time ever for it to make a speed run.

The first thing that gets your attention with the car is the interesting aerodynamics of the front end which is completely encased with sheet metal. It looks too blunt for this application, but owner Ken Snyder explained, “I wanted to block the air from the intake and push around the sides of the car.” It has an impressive CD of .21.

The powerplant selected was a 355 small block Chevy with a Victor Jr. aluminum intake fed by a 1000cfm Holley double-pumper carburetor. The aluminum heads are by AFR and provide an 11.75-1 compression ratio. other mods. The PA owner indicated that it’s making about 375 horsepower and he hit the traps at 6500 RPM and a speed of 142 mph.

It’s a nice effort for his first time out, but he has plans for increasing the performance.

“I am thinking about a larger 1050 Dominator carb and maybe a Pro Mod supercharger. Anything I can to make more horsepower!” 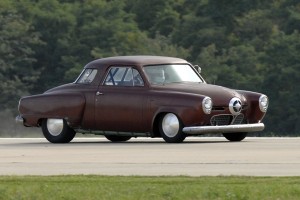 It’s easy to understand why the front end of the Study is nose down during this run because of the big weight in front.

A 1963 Avanti two-door coupe is indeed an unexpected model in this type of racing, but retired airline pilot Jack Heibel of Wartburg, TN, liked the looks of the body style.

The powerplant was a 1964 259cid V8 Studey engine. It was rated at 180 horsepower with a 8.5-1 compression ratio. The carburetor was a Stromberg two-barrel.

But when he got done building it, there certainly wasn’t much resemblance to the stock engine.

The block was bored .030 over while the stock heads were ported and larger valves were added.

Also emplaced was a radical five-inch-lift Delta Cam along with Ross forged pistons and ARP rod bolts, but he did stay with the stock rods.

The carburetor was replaced with a larger AFB 600cfm four-barrel which runs on 110 octane gas.

The remainder of the powertrain for the modified powerplant consists of the stock three-speed automatic transmission and a Dana 44 limited slip rear-end. The rebuilt mill is now capable of about 300 horsepower made at 6300 RPM, the speed that Heibel tries to 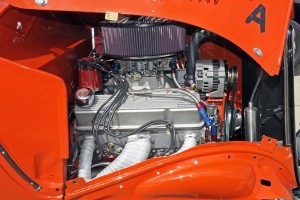 achieve when he hits the timing strip.

“I think I might change the intake and try a Holley 650cfm Carb and see what happens,” he related. 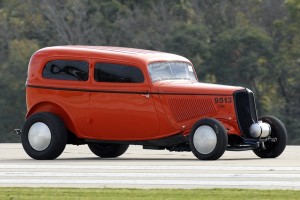 The old ‘33 Ford Sedan cuts a striking figure at speed. Its best effort has been 147 miles per hour. 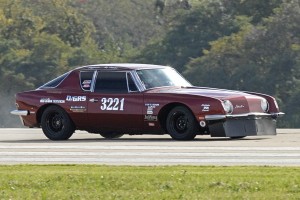 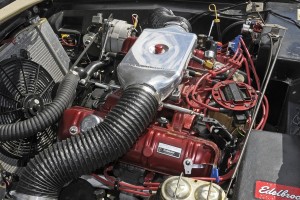 The engine matches the Avanti body brand with a hopped-up 1964 259 Studebaker engine, making 120 horsepower more than its 180 hp stock value. 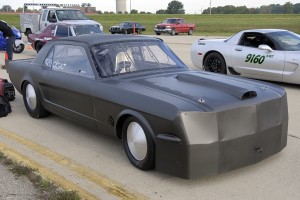 Hard to ID this as a ‘66 Mustang from the front, but the owner assures that it improves the aerodynamics of the vehicle. 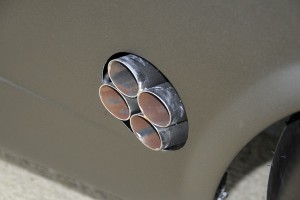 Note the nifty exhaust pipes emerging from the front quarter.

Advertisement
In this article:Wilmington Mile