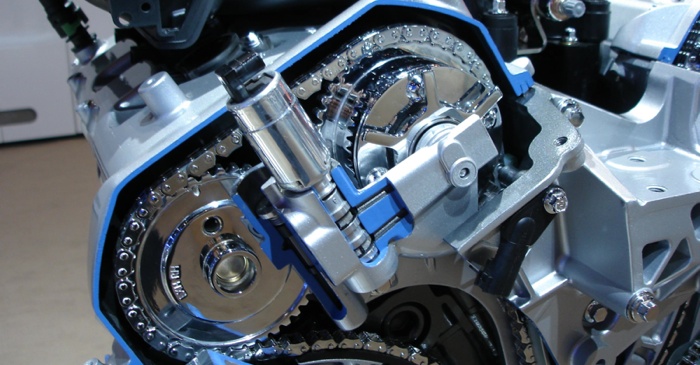 For metal parts to rotate, move, lift, bend, sway and – hopefully – not touch multiple times per second, every minute of every hour the engine is running takes more than just good enough – it takes precision that Swiss railroad conductors would envy. While everything in the engine has to precisely fit and accuracy is key, nowhere is precision more critical than in the timing. 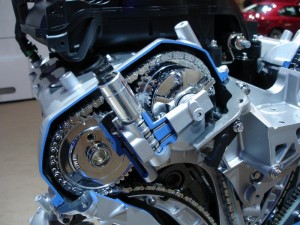 For metal parts to rotate, move, lift, bend, sway and – hopefully – not touch multiple times per second, every minute of every hour the engine is running takes more than just good enough – it takes precision that Swiss railroad conductors would envy.

While everything in the engine has to precisely fit and accuracy is key, nowhere is precision more critical than in the timing.

“Opening and closing the intake and exhaust valves in precise synchronization with the up and down strokes of the pistons requires very accurate timing,” explains Engine Builder Technical editor Larry Carley. “At idle, the time interval between valve openings for each cylinder is about a fifth of a second. At 5,000 rpm it is about two hundredths of a second. In a four-stroke engine, the intake and exhaust valves open and close every other revolution of the crankshaft, so the cam only turns at half engine speed. That is why cams have big gears on the end and crankshafts have little gears. The drive ratio is 2:1, so at 3,000 rpm the cam is turning at 1,500 rpm.”

Belts or Chains? How Do You Choose?

Both belts and chains have advantages and disadvantages in each application. According to an aftermarket supplier of engine components, belts offer lower weight, lower cost and less noise. They are wider than chains, however, increasing the overall engine length. Belted engines need more room under hood. They also require replacement, typically at 50,000 to 90,000 miles, depending on the belt’s construction.

However, according to another leading timing component supplier, over the past 20 years belt applications have been fading out. “The Achilles heel of belts has always been the recommended change interval, which, for the most part, remains around 60,000 miles. A timing belt is considered an internal engine component, mission critical and most manufacturers offer powertrain warranties of 100,000 miles and they do not want a mission critical component that can’t make it through the warranty period.  Timing belts are not cheap to replace.  The job can cost well over $300, more or less in the same realm as a timing chain.”

Timing chains are reliable and can be used in pushrod engines or overhead cam engines. A chain is usually quieter than a straight cut gear set but not as quiet as a belt.

Chains are usually less expensive than gears but more expensive than belts. Their downside is that they stretch, which typically occurs after many miles of service but can happen fairly early in the chain’s life in a high-performance engine with high valve spring pressures. Chain stretch is not good because it creates slop, noise and retards valve timing and ignition timing. Chain rattle is a common complaint in high mileage pushrod engines when the chain has stretched and is rubbing against the timing cover. Chain rattle can also occur in OHC engines as a result of stretching, but is often caused by worn or damaged chain guides or a bad chain tensioner. 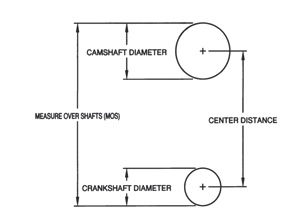 Timing belts have been used on a wide variety of OHC cam engines over the years. Timing belts are quiet, and they generate less friction than a timing chain or gear drive, which reduces parasitic horsepower losses inside the engine and improves fuel economy and power. Timing belts may be made of synthetic rubber such as neoprene, Highly Saturated Nitrile (HSN) or EPDM, and reinforced with tough fiber cords (often Kevlar). The tensile cords inside a timing belt prevent it from stretching, which allows a belt to maintain accurate valve timing for a longer period of time than a chain typically would. But belt life is limited by the material the belt is made from. On older applications (1990s vintage and earlier), the recommended replacement interval for OHC timing belts was typically 60,000 miles. Today, it ranges from 100,000 to 120,000 miles thanks to belts constructed of stronger and more durable materials.

Timing belts will often last much longer than the recommended replacement interval, but they won’t last forever. Eventually, the belt will fail — usually with little or no warning — and when that happens, it can bend the valves and cause a lot of expensive damage if the application is an interference engine.

To go the distance, a timing belt must be properly tensioned and protected from outside contaminants (no missing dust covers and no oil or grease contamination from engine oil leaks). If belt tension is not adjusted properly when the belt is installed, or the belt loosens up, it can jump time. It can also jump time if the cogs on the underside of the belt are worn or damaged.

Another aftermarket supplier says for today’s medium-size to smaller automotive engines, belts are still a viable option. Part of the engineering equation here is the distance between the cam and crank – the longer that distance, the more likely the OE will choose to use a chain. As engines continue to be physically downsized, belts are seen as the more cost-effective choice by many manufacturers. We recommend checking belts beginning at 50,000 miles and then at 10,000-mile intervals thereafter. With chains, you’ve got greater durability as long as the engine is well maintained. Look for chain stretch, and be sure the slack side of the chain can’t be moved more than half an inch.

Timing chain sets are far more expensive, both at the OE level and within the aftermarket. Plus, in a replacement situation you’re typically replacing only the belt, whereas with a chain setup you need to replace the chain and sprockets. Regardless of style, however, all of our experts agree that it’s absolutely imperative for the aftermarket part to follow the lead of the OE manufacturer. Each engine’s unique physical design and performance requirements dictate the timing technology used.

There’s not much to do with respect to inspecting a timing chain. Modern applications should go well beyond 100,000 miles.  But if the engine needs to come apart for any reason, the chain guide wear surfaces should be checked. Wild wear patterns would indicate a chain system problem.  Most systems are engineered to keep the chain under control while the chain wears, but if those limits are exceeded, problems will show up and the wear surfaces are a good indicator. With regard to belts, they are also usually hidden. It’s best never to gamble beyond the manufacturer’s recommended change interval. 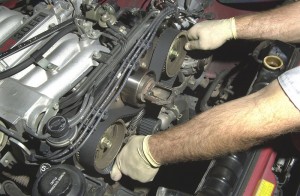 Another option is gear drives, often found in diesel engines. The most robust type of cam drive, there’s no chain stretch or belt breakage to worry about.

Gears are long lived but like all engine components, not immortal. The gears must have the proper backlash and receive adequate lubrication. The initial timing accuracy of a gear drive is no different than that of a new chain or belt drive. The only difference is that the gears should maintain timing accuracy over a longer period of time than a chain.

The downside of a gear drive is that they are more expensive than most chain or belt drives, and heavier. Straight cut gears can be quite noisy (even the so-called “silent” versions), producing a loud whine as the teeth mesh against each other. Most OEM gear drives have more expensive helical cut gears that are machined at an angle to reduce friction and noise.

Because a gear drive has less “give” than a timing chain or belt, gears also tend to transmit more vibration and harmonics to the valvetrain. In low rpm engines (such as diesels), this usually isn’t an issue.

But in a high-revving performance engine with a gear drive setup, it may create harmonics that affect valve timing and valve seating. Some manufacturers of aftermarket performance gear drives that use a dog-bone style floating gear set between the cam and crank gears do not recommend using their products on engines that rev higher than 7,000 rpm.

On some of these sets, the windows on the cam sprocket’s timing sleeve play a role in actuating the valvetrain. Because the requirements of each engine are now so specialized, says this industry spokesman, rebuilders must be certain they are replacing the OE set with a technology that mirrors the OE design, and this is true for tensioners, guides, rails and other components as well.

Says another technical expert, the biggest change in timing sprockets has been a move from machined cast iron to sintered (powdered metal). Most sintered sprockets require no machining which eliminates extra manufacturing steps and also produces closer tolerances from one part to the next.

Advertisement
In this article:Timing Components