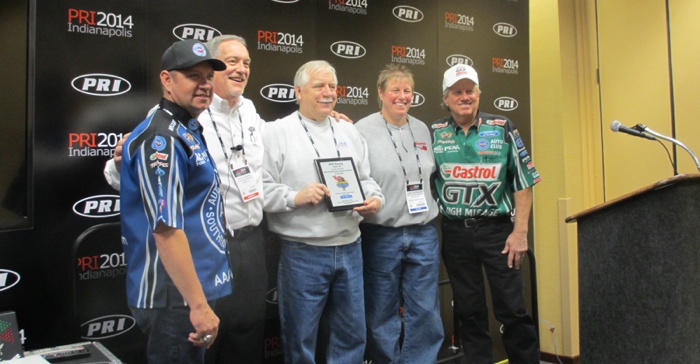 NVR is a race-oriented engine shop that builds mostly circle track and drag vehicle engines. With more than 40 years in the industry, Tom Nickerson works with his wife Cindy handling mostly Chevrolet builds, as well as other nameplate engines. NVR was named the 2014 Performance Engine Builder of the Year and we took a look at its operation. 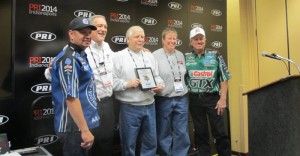 John Force and Robert Hight dropped by the Performance Engine Builder of the Year award ceremony to pose with NVR Racing.

It was just a day like any other in Butler, Wis., for Tom Nickerson of NVR Racing, until he received a call from Doug Kaufman, editor and publisher of Engine Builder. Upon being told that he had been named Engine Builder magazine’s 2014 Performance Engine Builder of the Year, Tom’s first reaction was a skeptical, “Yeah, right.”

Although he initially didn’t believe the achievement was real, after learning that he had been nominated by one of his customers and about the extent of the award, Tom was finally convinced that he had indeed won the annual award and that it wasn’t a hoax.

In fact, Nickerson and NVR Racing are now the third winners of the award, which also went to Ed Pink and Kevin Kroyer before him.

Tom and his wife, Cindy, accepted the award at the PRI Show in Indianapolis this past December where they received another surprise – John Force popped into the press room to congratulate the winners and pose for pictures. 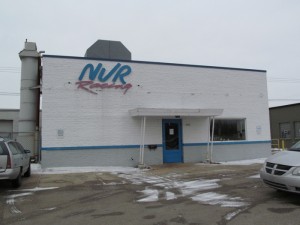 Much like John Force, Nickerson started his career on the drag strip. “I’ve been a drag racer my whole life,” he says. “My first serious car was a 1966 L79 Chevy 2 that I raced pretty actively before I started running all-out tube chassis cars.”

During his racing days Tom ran door cars and had a pro stock car that he ran in UDRA (United Drag Racers Association) out of Chicago. Tom won the first race he entered with a small block Chevy Monza racing against HEMIs and big block Chevys.

Tom built his own 1,500 sq. ft. facility in 1980, but quickly found it couldn’t contain NVR for long. Tom built small block Chevrolets for the most part, because that was the most popular engine. “When I started NVR I was on my own and another guy joined me shortly after,” he says. “Today, in our 5,200 sq. ft. shop in Butler we have five employees. I have 40 engines in the building right now, and work on roughly 200 engines a year. We work on five to 10 engines at a time.” 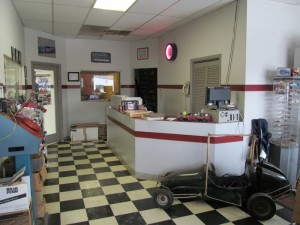 NVR is a race-oriented engine shop that builds mostly circle track and drag vehicle engines. With more than 40 years in the industry, Nickerson works with his wife Cindy handling mostly Chevrolet builds, as well as other nameplate engines – though it’s not just the traditional domestic engine build.

“We have a Ferrari engine that we are doing some machine work on right now, and another guy that brought us an Alfa block for machine work,” Nickerson says. “We also have a Ford flathead project and, of course, numerous Chevrolets. We do a Chevrolet almost every three days.”

NVR does everything engine related, but Nickerson says his shop’s big attraction is the dyno. NVR is on its third SuperFlow dyno.

Nickerson says that declining car counts at local tracks have had an impact on his business over the past couple of years.

“We’ve had to diversify a bit, so we’ve gone into engine restoration in addition to our usual race engine builds,” he says. “We have a Lincoln 430 cu. in. engine we are doing right now and a 1965 Corvette fuel injected motor we just finished. It used to be all racing, but now it isn’t because of the economy.” 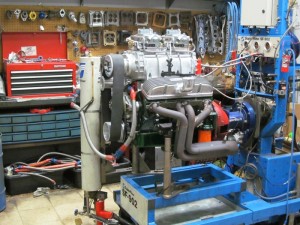 NVR Racing does work on roughly 200 engines a year. The shop sees mostly Chevrolets and other nameplate
engines, but will work on an occassional import including a Ferrari.

While the shop has changed its size and direction over the years, the memories of successful builds remain in Tom’s mind – some stand out more than others.

“Years ago, roughly 1995, a local team from the area bought a Chevy engine from Richard Petty,” he says. “They brought the engine to me to dyno for them because they found it hard to believe that Petty would sell them a good engine rather than keep it for himself. We put it on the dyno and it made 480 hp. The new one we were building for them made 525 hp. That engine went in their car and went to Phoenix and qualified fifth, which was pretty cool.

“We’ve done engines for Jim Sauter, and we did motors for Tom Bigelow. At one time Super America had a Red, White and Blue team of Dick Trickle, Dave Marcis and Jim Sauter and we did engines for all of those guys as well.”

NVR is also involved in Midget racing. Sun Prairie, WI is just 60 miles to the west and its Angell Park Speedway is one of the leading midget tracks in the country. Nickerson’s shop does engines for that series as well.

“We got hooked up with a guy from Australia and his company Hawk Racing Engines,” he says. “We’ve built in conjunction with him about 35 engines now. Tony Stewart has bought six of these engines from us through Hawk Engines.”

Tom’s automotive expertise doesn’t end there. As diversification becomes more and more important in the engine building industry, Nickerson says he is toying with the idea of turning NVR into a full-service shop. 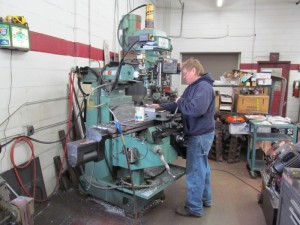 NVR also has a basic machine shop with a CNC mill, which Cindy runs. The shop makes small products for racers and local industry that need machine repairs. NVR will do cylinder head work, crankshafts and balancing work.

“In the future we are actually looking at expanding into a full-service shop where we would do the car and the engine,” he says. “We’re not small-minded, we’re looking at all kinds of things to do.”

While that next step might be a few years away, Tom and his team at NVR Racing are elated to have won the 2014 Performance Engine Builder of the Year award.

“My more than 30 years of hard work actually paid off to get recognition for that,” Nickerson says. “It is an unbelievable honor, and person after person has been commenting on it and congratulating me. Other shops have been congratulating me and that all means a lot.”