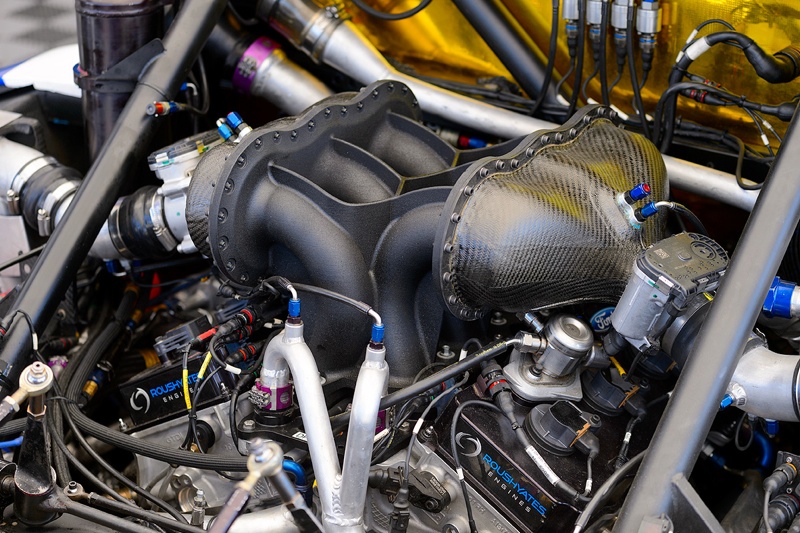 When Ford’s EcoBoost-powered race car hits the track at the Belle Isle Grand Prix this weekend it will be using engine parts made by a computer printer. Using 3D printing, parts such as the intake manifold on the Ford EcoBoost race engine used in the Chip Ganassi Racing with Felix Sabates Daytona Prototype car are now created on a printer.

“3D computer printers have totally changed the development process for our Daytona Prototype race cars,” said Victor Martinez, 3.5-liter EcoBoost race engine engineer. “3D printing has advanced at such lightning speed in recent years that in a matter of hours, we can create real, usable parts for race cars. That’s exactly what we did for the 24 Hours of Daytona earlier this year.”

Ford first started to 3D-print decades ago, purchasing the third 3D printer ever made, in 1988. The company first used 3D-printed parts for prototype buttons, switches and knobs. As the technology has improved, the quality of 3D-printed parts has become remarkably precise, and the parts themselves have become increasingly usable.

So smooth and precise has the finishing process become that 3D-printed parts are now used in real-world settings – on prototype vehicles built for durability testing, and on the Ford race car that won the 53rd running of the grueling 24 Hours of Daytona in January.

“We have the ability to design an entirely new part and, one week later, have that part in hand,” said Martinez. “This lets the engineers who develop our cars – both for road and track – spend more time testing, tuning and refining.”

Computer-aided design mockups are sent to Ford’s rapid prototype lab where they are analyzed and input into one of many 3D printers. Roughly one week later, a finished product is ready to be cleaned, painted and used.

“Toward the end of the 2014 TUDOR United SportsCar Championship season, we began to design a number of revisions for our intake manifold,” explained Martinez. “In order to rapidly prototype and prove them out, we 3D-printed several intakes and tested them on our dyno and verified performance on the track. The iterations we created based on the 2014 intake manifold accelerated the development on our 2015 manifold – which is both lighter and brings improved airflow.”

Take it to the track
Leading up to the 2015 24 Hours of Daytona, Ford Performance engineers opted for a 3D-printed intake manifold for the Chip Ganassi Racing Daytona Prototype car. Employing the most advanced intake yet printed, in combination with carbon fiber intake plenums developed by Multimatic®, a strong, reliable and lightweight intake manifold was created for the No. 02 Target Ford EcoBoost-Riley.

“The prototype manifold exceeded our expectations in testing, so in the essence of time we decided to use it for the race,” said Martinez. “We modified our intake with carbon fiber components, painted it, and then it was ready to go to the track.”

“It was a great day for Ford and a great day for Ganassi,” said Raj Nair, Ford group vice president, Global Product Development. “We had a great car and great drivers. And, of course, we had really great power, reliability and fuel economy out of the EcoBoost engine. This is a great testament to the entire team. I couldn’t be prouder of them.”

Now, Ford aims to repeat this performance at the TUDOR United SportsCar Championship race at the Belle Isle Grand Prix on May 30.

There’s no debating that Callies Performance Products manufactures a great crankshaft, among other engine components. We picked out a Callies Magnum Ford crank for our twin-supercharged small block Ford engine build, so we took the opportunity to review exactly what we got from Callies. Related Articles – Larry “Spiderman” McBride’s Suzuki Top Fuel Motorcycle Engine –