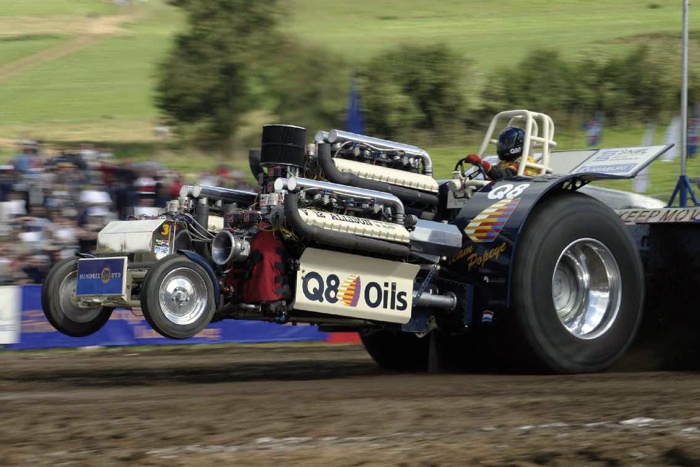 In December, we discussed the use of Allison engines – originally designed for use in WWII fighter planes – in watercraft applications. Now, we’ll pick up the story of these versatile powerplants finding success on dry land. 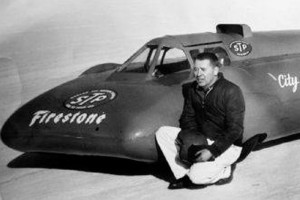 That’s Athol Graham with his Allison-powered desert-race streamliner. During a speed run in 1960 he was killed in a horrendous crash at more than 300 mph.

In December, we discussed the use of Allison engines – originally designed for use in WWII fighter planes – in watercraft applications. Now, we’ll pick up the story of these versatile powerplants finding success on dry land.

There were a number of engine builders who tried the Allison engine in a drag racing application and one of the best was the unbelievable E.J. Potter. This mechanical genius started out by installing automotive engines in motorcycles. Genius or insanity, he initially installed small block Chevys between his legs and was able to do an astounding 160 mph in the quarter mile. After a bad wreck, he decided to try something a little safer with four wheels.

He next fashioned a more conventional four-wheel drag machine out of an old Dodge station wagon and installed an early Allison engine in the rear of the wagon. It was somehow hooked up with a Borg-Warner transmission and was a real crowd pleaser running some impressive speeds. But being the engineer he was, Potter decided to modify the Allison for more power – until the engine blew up one day. He suffered some serious road rash in that incident. 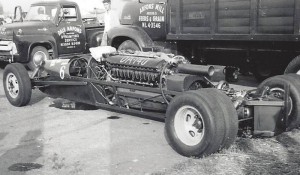 This is one of Art Arfons’ dragsters, an Allison-powered machine.

However, that wasn’t the end of the story. Good old E.J. installed another Allison on a flatbed trailer. It was very light with the shell of a Honda Civic and it went like crazy. He also installed an Allison in a monster truck called the “Awesome Kong” when all of the competition was using big block automotive engines.

Additionally, Art Arfons (who was perhaps best known for his high-speed racing on the desert) also used Allison power in dragsters. The capability to reach 140 mph in only 8 seconds was another of his straight-line accomplishments – his later versions were reportedly capable of turning an amazing 270 mph.

Jim Lytle was another Allison artist who became aware of the engine’s power when watching the unlimited hydroplanes using them in the 1950s. One of his first uses of the 1,710 cubic inches was in 1963 when he installed one in a ’34 Ford, turning an impressive 11-second, 150-mph quarter mile. 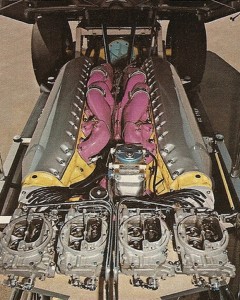 Later, he did the improbable by joining together four of the giant engines into his Quad Allison dragster. Its 8,000 horsepower was noted as the most-powerful piston-engine drag car ever. And over the years, Lytle designed a number of other Allison-powered vehicles including a tiny BMW Isetta.

There was some significant land speed racing using Allison power on the Bonneville desert course. As mentioned, one of the most successful Allison individuals was Art Arfons.

Arfons first ran an Allison-powered machine called “The Anteater,” which looked much like the famous John Cobb car. In 1961, the low-slung machine reached a top speed of more than 313 mph before burning up the clutch. Arfons reportedly was making an amazing 3,800 horsepower from his Allison. After that, he would move onto his famous desert speed runs using jet power.

A strong competitor to Arfons was Athol Graham and his “City of Salt Lake” streamliner. This bright red machine was hand-fabricated by Graham using a B-29 bomber belly tank and a surplus P-51 Mustang cockpit. He had tuned his Allison to 3,000 horsepower and ran the course at a two-way average of 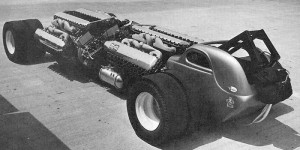 A rear wheel bearing failed when he was running at 311 mph, hurling the car into a wild 4,000-foot crash. The vehicle was a crumpled mass of broken metal and, unfortunately, Graham didn’t survive the crash.

The use of Allison engines in pulling is a long and interesting history with technology wars among a number of skilled engine builders. They were mounted in many different configurations with many modifications and innovations made to the aging 12-cylinder giants. 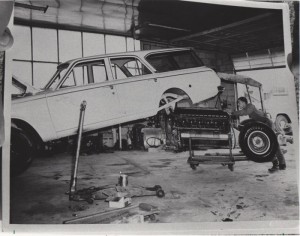 Getting that cumbersome and heavy Allison into the back of E.J. Potter’s station wagon took some real doing.

The best data seems to indicate that the first Allison was installed in a pulling tractor in 1966 on a Minneapolis Moline UB by the Allison Pulling Team. Through the years, that team competed against strong fields of tractors with as many as five-or-six supercharged big block Chevys or Chrysler Hemis.

Mike Holden of Marietta, OH, started his amazing career in the early 1970s when few pullers were using the big engine, and few of those few were making them work. Holden is credited with bringing the Allisons up to the levels that made them the top-pulling engine for a number of years.

He replaced the existing centrifugal supercharger with a turbocharger in the belief that this would make more power. While it took him a while to get everything figured out, in the end, it was indeed the way to go. A surprising change he made was to replace the factory dry sump oiling system with a wet sump set-up.

In 1976, he introduced his first turbocharged Allison followed in 1978 with his first tractor using two Allisons. They were installed side-by-side in the tractor, joined together in a transfer case with a single driveshaft coming from it. The twin set-up was very successful in competition. 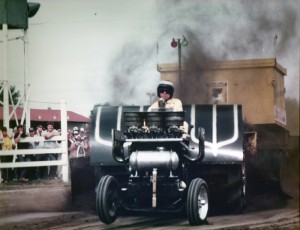 This Stone Allison pulling machine only sports a single Allison.

Through the years, Holden’s research was unending. First, he made bigger valves for the cylinder heads. Working with Mallory, an advanced ignition system was developed, one that produced a distinct sound when it was running. Also, an oiling problem was traced back to a seal in the supercharger. He realized the importance of increasing the compression ratio, and its importance in increasing power. In the early 1990s, he was able to raise it to more than 10.

Now get this: in 1985, Mike moved from two to three Allisons on his tractor. It was a plan that he had wanted to execute five years earlier, but sickness in the family pushed it down the road.

Another huge name in Allison pulling was the charismatic Gardner Stone from Middlebury, VT. Stone always had a military flair about his pulling team, with scrambled eggs on his hats, military logos on his tractors, and of course the use of military engines, as well as the names of his pullers: “The Brigadier” and “The General.” 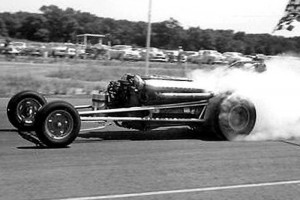 He loved the Allisons and explained why. “I think that it’s an amazing engine being designed in the late 1920s and into production in the 1930s,” Stone said. “It’s got four valves per cylinder, roller rockers, roller lifters. And when you think we were running those 50-year-old engines against modern multiple blown V8 engines, that was really something.”

Stone explained that one of the challenges of running the earlier Allisons was a narrow power band. “We had to do everything between 2,000 and 4,000 RPMs. We had to get our clutches locked and to the track in that narrow range – but then we still had to get them hooked under power between 3500 and 8000 RPM.”

Starting in the mid-1980s, he was pulling with one, two and three Allison-powered machines.

In the 5,000 class he had to run against tough triple-car-engine tractors. But with the twin-engine tractor, he stood at the top of regional pulling and won his share in national NTPA competition. Another aspect of the twin tractor was that it used fuel injection instead of the expected turbochargers. Stone later would have a three-Allison machine, which he ran in the 11,000-pound class with much success. 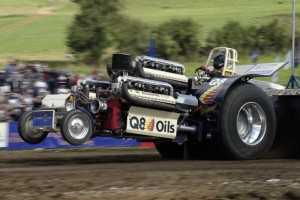 E.J. Potter was also one of the big dogs in Allison pulling. Many know Potter because of the number of Allisons he had on hand. “There were times when I owned as many as 75 of them. After the war, there were about 1,000 of them in Oklahoma, though I didn’t know that at the time. When I got there, there were only a few left, but I still bought about 83 of them in various conditions,” he said.

Like other Allison pullers, EJ realized the advantage of using fuel injection on the big engines and he designed a fuel-injection system that could be bolted onto an Allison in about two hours. “The reason it made sense to me is that you generate a lot of heat with aviation gas,” he explained.

He indicated that the difference between running Allisons in hydroplanes and tractors was worlds apart. “With the boat jumping in and out of the water, it’s pretty hard on the engine innards. But there is the advantage – they run longer because there is unlimited cooling water from a pick-up,” he said. “I also liked the turbochargers better than the fuel injection system for the marine applications.”

Potter said that during World War II a lot of P-39 fighters were given to the Soviet Union. “That model used the Allison engine, so I bet there could be a lot of them lying around over there,” Potter said.

Potter also attempted to join two V12 Allisons together with two crankshafts and one crankcase. Success eluded him, but his contemporaries admit that if anybody could have built such a contraption, E.J. would have been the man!

Ron Barga of Ansonia, OH was a collector and developer of Allison power. He indicated that at one time he had about 15 of the V12 engines, and was a big supporter of the multiple engine tractors. He indicated that the rare W-24 engine (basically two Allisons joined together) was very attractive, but there were few of them, so Ron went to a stacked configuration with a pair of Allisons. Believe me, this machine was like seeing a P-38 Lightning roaring down the track wide open. 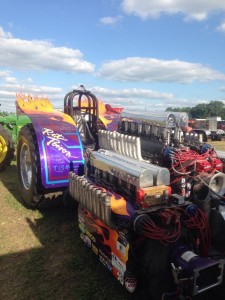 Barga said, “I remember having to compete against those quad-Chevy set-ups – they were very hard to beat. Combined, they had more horsepower, but my pair of Allisons had a lot more torque. The Chevy machines also had more RPMs to work with, but if we tweaked the Allisons and worked the track right, we were competitive.”

With the cost of Modified pulling always being high cost, Barga explained that

he initially used the Allisons because of the cost factor. “It was more horsepower per dollar, but finding parts became a problem and the cost went up,” he said. “The best combination for me, for its time period, was the supercharger/carb set-up.”

Like a lot of other National Tractor Pulling Association (NTPA) drivers, Barga also took his show on the road during the 1980s and ended up selling a twin Allison in Germany. “It’s still pulling over there today! Mike Holdren sold about 10 Allisons and parts to a German puller,” he explained.

Like every other outstanding historic powerplant, even the mighty Allison eventually found itself out-powered in all its motorsports endeavors.

It was somewhat different with the Allison pulling tractors. For many years, the Allisons pulled against the multiple automotive engine setups, and for a time could compete very strongly against those blown V8 engines. But because the V8s were constantly improving, they were eventually able to gain the top rung for good. n