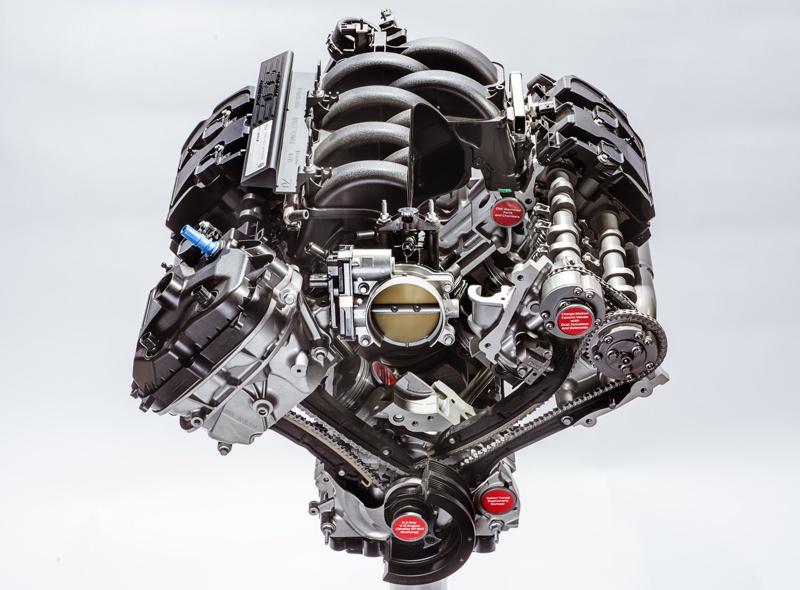 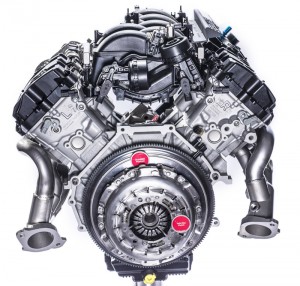 Ford has announced the most powerful naturally aspirated road-going engine in its history. The all-new Ford 5.2-liter flat-plane crankshaft V8 will produce 526 horsepower and 429 lb.-ft. of torque in Shelby GT350 Mustang and Shelby GT350R Mustang – an engine unique to the two models set to go on sale this fall.

“The Shelby GT350 program began with a clear objective – create the most balanced, nimble and exhilarating production Mustang yet,” said Jamal Hameedi, Ford Performance chief engineer. “Every change we made to this car was driven by the functional requirements of a powerful, responsive powerplant. The high-revving, naturally aspirated 5.2-liter flat-plane V8 delivers on every target we set – high horsepower, broad torque curve, aggressive throttle response and light weight.”

The all-new 5.2-liter V8 is not only Ford’s most powerful naturally aspirated engine ever, but also its most efficient in terms of specific output. Without turbocharging or supercharging, the flat-plane crankshaft V8 produces 102 horsepower per liter of displacement. The new engine is also the highest-revving V8 in Ford history – with a redline of 8,250 rpm.

Unlike traditional V8 engines, the all-new 5.2-liter uses a flat-plane crankshaft more typically found in a Ferrari sports car or in racing applications. The design of this new engine for the Shelby GT350 was optimized using computer-aided engineering and fully digital performance simulations. Millions of intake, cam and exhaust configurations were iterated before arriving at the optimal combination. 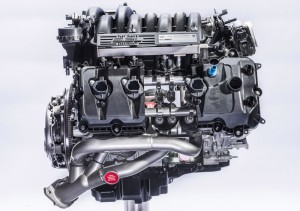 Beyond a change in the characteristic sound of an American V8, the flat-plane crankshaft helps improve cylinder exhaust-pulse separation by allowing a firing order that alternates ignition events between the V8’s two cylinder banks. This can vastly improve engine breathing, and subsequently allow the engine to make more power. 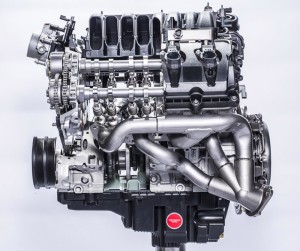 The result in the new 5.2-liter V8 – in addition to a uniquely exotic, delicious engine note – is 526 horsepower at 7,500 rpm and 429 lb.-ft. of torque at 4,750 rpm. Even more impressive is the track-tuned flexibility of the engine’s exceptionally wide powerband. It produces 90 percent of peak torque from approximately 3,450 rpm through 7,000 rpm, and features a racetrack-friendly spread of nearly 3,000 rpm between its torque and horsepower peaks.

In both Shelby GT350 and Shelby GT350R, the all-new 5.2-liter will be paired with a six-speed manual transmission as its only gearbox option. The Tremec TR-3160 six-speed manual is specifically engineered for less mass and high-rpm application in the new Shelby Mustangs. The six-speed features a lightweight, die-cast aluminum case and clutch housing for increased overall powertrain stiffness. Gear cross-sections, the dual-mass flywheel and dual-disc clutch are all optimized for an overall reduction in inertia and weight. 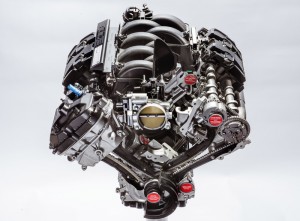 Other aspects of the new 5.2-liter V8 (actual displacement is 5,163 cubic centimeters) include a slightly oversquare bore and stroke of 94×93 millimeters, and a performance-enhancing 12.0:1 compression ratio. Computer numerical control-machined cylinder heads house camshafts that develop a massive 14 millimeters of lift for both the hollow-stem intake valves and sodium-filled exhaust valves. A single, fast-acting 87-millimeter throttle body – the largest ever used for a Ford engine – feeds air to the engine, allowing for a simpler, lighter intake.

“A new Mustang as exceptional as the Shelby GT350 deserves an equally extraordinary engine,” said Dave Pericak, director, Ford Performance. “The all-new naturally aspirated 5.2-liter V8 perfectly fits the balanced dynamics of the Shelby GT350, and we believe this new engine will become a performance legend.”

Now that Chris has checked all our specs, we begin to assemble the bottom end components of our small block Ford such as the rotating assembly, main and rod bearings and the camshaft. Next episode, we will be getting into our cylinder head assembly and more of the valvetrain components. Related Articles – Circle Track 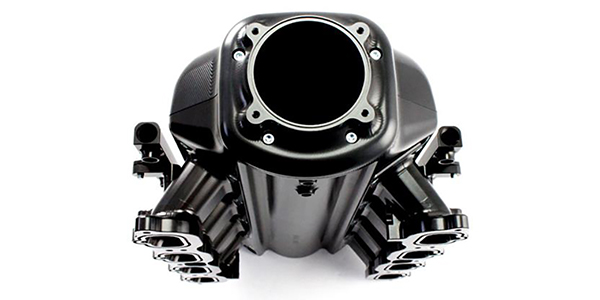